Please ensure Javascript is enabled for purposes of website accessibility
Log In Help Join The Motley Fool
Free Article Join Over 1 Million Premium Members And Get More In-Depth Stock Guidance and Research
By Brian Feroldi, Tim Brugger, and Adam Galas - Sep 5, 2015 at 10:20AM

What should you do when the market falls? We asked our Motley Fool contributors to weigh in.

When the stock market is calm and slowly makes its way higher, it's easy to stick to your long-term financial plan. But when the market starts to head south, it can do so in a hurry, and it's natural to feel like you need to "do something" in order to keep everything you've worked for safe.

We asked our team of Motley Fool contributors to share a smart move they like to make when the market officially enters correction territory. Here's what they said.

Brian Feroldi: While most investors know they should look to buy when the market goes on sale, actually going out and purchasing stocks when the market is panicking is an entirely different matter.

This reminds me of a famous Mike Tyson quote:

Everybody has a plan until they get punched in the face.

When I feel like the market is pounding on my emotions, I like to bring up a 10-year chart of the S&P 500 that looks at both the price return and the total return (which adds in the effect of dividend reinvestment). 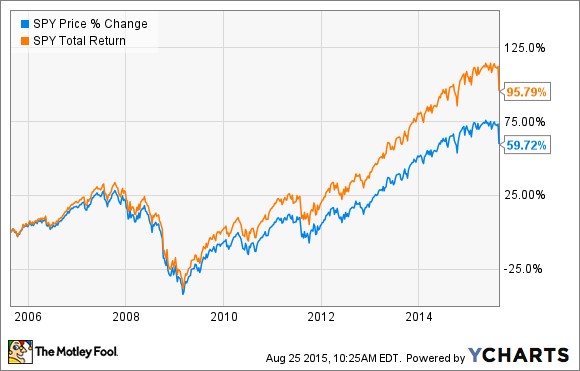 Despite the fact that the last 10 years included the worst stock market decline since the Great Depression, it is comforting to know that the total return of the market is still up 95%! I take a lot of comfort whenever I look at this chart, especially when you consider the near-constant barrage of negative economic news investors have had to endure over this time period.

So, what's a smart move to make during a correction? Continue to add money to the markets as you normally would, and get on with your day! Always remember that you are investing in the stock market to help you achieve your long-term financial goals, so short-term price movements shouldn't change your plans at all, no matter what kind of crazy news you see hitting the headlines.

Adam Galas: One piece of advice I'd like to add is to consider buying quality dividend stocks.

A 2008 study found that, between 1968 and 2007, the highest 100 yielding stocks in the S&P 500 crushed the overall index by 29.4% annually. Other studies have found that, over the long term, dividend growers are the best-performing types of stocks.

High, consistently growing, and secure dividends not only build incredible wealth over time, but also help investors look past the doomsday headlines of today. They teach you to think of stocks as actual businesses instead of mere blinking digits on a computer screen.

Better yet, market corrections are an excellent time to lock in mouthwatering yields that can power market crushing returns for years to come. Add in the opportunity of reinvesting those dividends via dollar-cost averaging when share prices are dirt cheap, and the effect becomes even more powerful.

Tim Brugger: It was in the early 1990s, and I'd been a financial advisors for all of about two years. At the time, once high-flying IBM (IBM 1.74%) stock was in the midst of a precipitous decline. The problem? Much like today's IBM, the tech stalwart was slow in adapting to the ever-changing world of technology: It was happening, just not fast enough for many investors. I couldn't contact my clients who owned IBM shares fast enough: Panic had set in.

Inevitably, the initial reaction from shareholders was, "Tim, we have to sell it all, now!" My advice, which, thankfully, many IBM shareholders heeded, was, "Buy. Buy as much as you possibly can." Why? Because market corrections, be they broad-based, a particular sector, or even an individual stock, are a great opportunity, assuming you've done your due diligence.

Hopefully, most investors make the decision to buy a particular stock based on factors including a stable, forward-thinking management team, a clear, long-term growth strategy, relative value to its peers, and an appropriate time horizon, to name a few considerations. Assuming that's the case, what has a market correction really changed? The management team, long-term growth plans, and an investor's time horizon have remained the same. The difference? The stock that made sense at pre-correction levels just went on sale.

The same reason people line up on Black Friday to shop for bargains applies to the concept of buying during, and after, a correction. That 7-foot plasma TV you have your eyes on? The features and its durability are no different on Black Friday than they were the day before Thanksgiving: It's just a lot less expensive. Just like IBM stock was after its rapid decline a couple of decades ago.