Not all pilots, certainly. But for pilots lucky enough to work for FedEx, paychecks are getting fatter.

On average and across the nation, airplane pilots are a pretty well-off bunch. According to employment website Glassdoor.com, your average airline pilot in the U.S. earns just a smidge under $122,000 a year, plus benefits.

But there's one subcategory of pilots that is doing even better: Pilots who work for FedEx (FDX -0.51%). FedEx pilots have won a very sweet deal from their employer. Max hourly rates for narrow- and widebody airplane first officers and captains, by the time the new contract climaxes. Source: The Pilots of FedEx.

According to Memphis newspaper The Commercial Appeal, pilots flying for FedEx earn closer to $234,000 a year on average -- 90% more, to carry boxes from Point A to Point B, than the folks flying actual human passengers make. What's more, they'll soon earn even more than that.

This week, negotiators from the Air Line Pilots Association reached a tentative agreement with FedEx Express to give the latter's pilots an immediate 10% pay raise (effective Nov. 2, 2015 ). Assuming FedEx pilots vote to approve the deal, this raise will be followed by additional raises averaging 3% per year, every year, over the next five years. On top of that, pilots signing onto the new contract will receive lump-sum signing bonuses  ranging from $20,000 to $35,000, depending on rank and type of aircraft flown, almost of all which will be disbursed over the next nine months.

At the same time, new hires will see their monthly training pay double during their training periods, from $2,000 to $4,000 per month. And for those thinking about retirement, company-paid contributions to FedEx pilots' defined contribution retirement plans will be also increased by about 2% of salary over the next five years.

Finally, in a nod to current events, FedEx pilots'' new contract both continues and expands healthcare benefits, and contains a clause on "Affordable Care Act Excise Tax Mitigation " -- to protect pilots from any unfavorable changes in their health insurance, mandated by Obamacare.

In total, the union estimates that this new contract will add about $354,400 in total compensation  for a widebody FedEx Express captain over the six years it remains in effect -- and a not inconsiderable $206,600 for first officers serving aboard narrowbody aircraft. 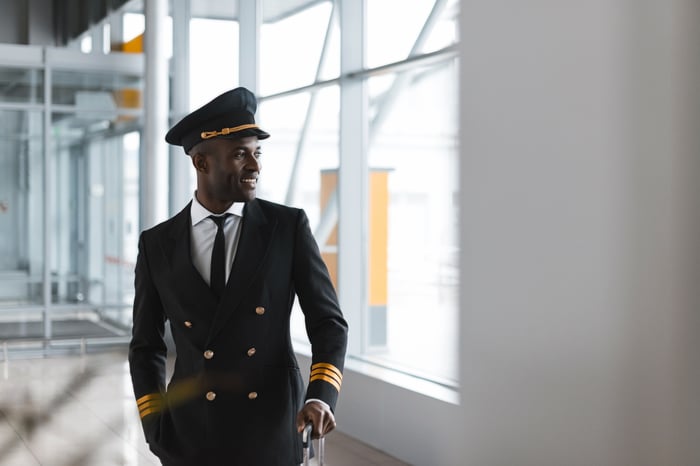 What it means to investors
Salaries are a big part of any company's operating costs. At FedEx archrival and union stronghold UPS (UPS 1.15%), "compensation and benefits " is by far that company's largest operating expense. According to SEC filings, this expense accounted for 60% of "total operating expenses," and ate up $32 billion of the $58.2 billion in revenues UPS took in last year.

FedEx, in contrast, is largely a non-union shop (pilots obviously excepted). As a result, FedEx has historically boasted one of the lowest costs of operation for employee wage, salary, and benefits, out of any of the major transportation companies. "Salaries and employee benefits " cost FedEx only $16.2 billion in fiscal 2014 -- less than 39% of "total operating expenses," and an even smaller percentage of the company's $45.6 billion in fiscal 2014 revenues.

Now consider that although richly compensated, FedEx's 4,200 pilots only represent only about 1.3% of FedEx's 325,000 "team members." Even a large  10% increase in salaries, when applied to such a small sliver of FedEx's workforce, probably isn't going to break the bank -- or even appreciably raise overall labor costs for FedEx.

Simply put, while the money FedEx pays its pilots may boggle ordinary American workers' minds, this is a raise that FedEx can easily afford to pay. And even in the unlikely event that the pay hike does start to pinch profits -- hey, December is just around the corner. FedEx can always hike its prices by another 5% (as it does pretty much every year, like clockwork) to cover the difference.

Fool contributor Rich Smith does not own shares of, nor is he short, any company named above. You can find him on Motley Fool CAPS, publicly pontificating under the handle TMFDitty, where he's currently ranked No. 260 out of more than 75,000 rated members.

The Motley Fool recommends FedEx and United Parcel Service. Try any of our Foolish newsletter services free for 30 days. We Fools may not all hold the same opinions, but we all believe that considering a diverse range of insights makes us better investors. The Motley Fool has a disclosure policy.