These businesses are the elite of the elite.

Recent market volatility has stirred up some attractive opportunities among the Dividend Aristocrats, the storied collection of S&P 500 companies that have increased their dividend payouts for at least 25 consecutive years. We can now purchase shares in dominant market leaders like AT&T (T -0.14%), ExxonMobil (XOM 0.98%), and Johnson & Johnson (JNJ 0.91%) at dividend yields not common in more placid market environments and be paid well as we wait for an eventual market recovery to lift the share prices of these elite businesses higher once again.

The telecom titan
At 5.7%, AT&T's yield is among the highest of the Dividend Aristocrats. The telecom giant's payout is well supported by its steady, subscription-based revenues and cash flows. And those cash flows are likely to receive a boost from its recently approved merger with DirecTV.

The deal puts AT&T in the position to offer attractive bundles of wireless phone, TV, and broadband Internet services. It also gives AT&T control over DirecTV's fast-growing TV business in Latin America, which should allow AT&T to further strengthen its international business.

Yet even after the DirecTV deal, the majority of AT&T's revenue will continue to be derived from its core U.S.-based operations. That may be particularly appealing to investors who are concerned about the recent extreme volatility in China's stock markets, and the potential fallout it could bring to other emerging economies. Investors may also find comfort in AT&T's 31 consecutive years of dividend raises, which gives evidence that the company can continue to generate cash in all types of market environments. As such, it remains an excellent defensive income stock for investors seeking to limit their risk in today's volatile market atmosphere.

The oil giant
ExxonMobil has earned its place among the Dividend Aristocrats with 33 consecutive years of dividend increases. Exxon is the largest of the major integrated oil companies, and the company is widely regarded as the most well run with some of the best returns on equity and capital in the industry. Yet the recent swoon in oil and natural gas prices has taken a toll on Exxon's revenue and cash flow, and its stock price has followed suit. 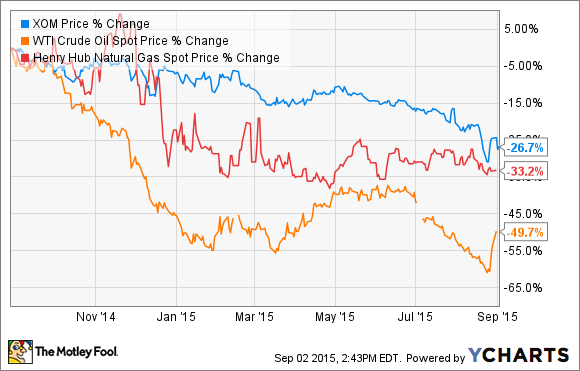 However, if energy prices rebound, Exxon's stock could rise sharply from these levels. And if the prices of oil and gas continue their descent, Exxon could benefit from the opportunity to acquire struggling producers at fire-sale prices. Either way, with Exxon's shares currently yielding around 4%, investors are being paid well to wait for the eventual share-price appreciation that either of those two scenarios could bring.

The healthcare colossus
Johnson & Johnson is one of the most noble of the Dividend Aristocrats, with an incredible 53-year streak of consecutive dividend increases. It's also one of the premier businesses in healthcare -- a field that should only grow in importance as the U.S. population ages in the years ahead.

With the number of adults age 65 and older set to more than double from 40 million in 2010 to 88 million in 2050, demand for J&J's pharmaceutical drugs, medical devices, and consumer goods should grow steadily in the coming decades. But far from simply a domestically focused business, J&J is truly a global enterprise, with 265 operating companies spread across more than 60 countries. So it will not only benefit from the greying of the U.S. population, but also that of many European and Asia countries, along with global population growth as a whole.

It's from its diverse business lines and global geographical footprint that J&J gets its strength, as weakness in one area can often be offset by strong gains in another. Along with its half-century of dividend increases, J&J's 31 consecutive years of adjusted earnings-per-share growth are a testament to this financial fortitude.

To further improve Johnson & Johnson's financial position, management is in the process of streamlining the business, as it sells off non-core assets to focus on the areas where J&J has the strongest competitive advantages and operational synergies. This should improve profitability throughout the organization, and position the company for continued growth.

All told, few companies are as financially sound as Johnson & Johnson. In fact, it's one of only three companies to earn Standard & Poor's top AAA credit rating (ExxonMobil and Microsoft are the others). The healthcare titan's strong cash flows allow it to easily meet its debt obligations while at the same time reward shareholders with a steadily rising income stream. That might make Johnson & Johnson's stock the perfect prescription for today's volatile market conditions.