Please ensure Javascript is enabled for purposes of website accessibility
Log In Help Join The Motley Fool
Free Article Join Over 1 Million Premium Members And Get More In-Depth Stock Guidance and Research
By Tyler Crowe, Matthew DiLallo, and Bob Ciura - Sep 6, 2015 at 8:05AM

There are some big reasons to think these energy stocks could do very well, but there is that voice in the back of our heads that tells us to wait a second.

When the entire energy market gets dragged down from industrywide factors such as oil and gas prices, there's a small handful of companies that look like tempting additions to a portfolio -- although there's always that lingering feeling that something isn't quite right with the big picture.

So we asked three of our energy contributors to highlight three companies that look awfully tempting today but that they aren't quite ready to pull the trigger on. Here are the companies they mentioned and why they're holding off.

Bob Ciura: It's tempting to jump in and buy oil stocks now, particularly those that have been hardest hit. Many exploration and production MLPs are sporting huge distribution yields, a consequence of their collapsing unit prices. One in particular is Breitburn Energy Partners (BBEPQ), which has fallen all the way to $2.50 per unit. That has sent its distribution yield up to an enormous 20%.

What I'm afraid of is the long-term sustainability of the distribution. Breitburn's hedges are set to roll off in the coming years. The company has hedged 77% of its total production this year, 65% in 2016, and 41% in 2017. If oil prices stay low for a prolonged period, Breitburn will be exposed.

More concerning is that there is now precedent for full distribution suspensions in the upstream MLP space. Breitburn's close peer Linn Energy (LINEQ) announced it will seek to suspend its distribution entirely at the end of the third quarter. This is a bad sign that the extremely high yields in the upstream MLP area may be too good to be true. As a result, I'm not tempted to buy Breitburn Energy, at least not yet.

Tyler Crowe: One company that's really caught my attention is Transocean (RIG 0.00%). A few years ago, the company appeared to be dead in the water, with a bloated fleet of older rigs sitting in the dockyards and dragging on profitability. In the past several months, though, new management, led by new CEO Jeremy Thigpen, has done a commendable job of ridding the company of these older assets, cutting the costs associated with idled rigs, and delaying the delivery of several new rigs that would be introduced to an already oversupplied market. What's even more encouraging is that the company expects to do even more scrapping of older rigs and cutting costs for non-operated rigs. According to management, it's looking at the potential of shedding another 10 to 15 of its older, less capable rigs in the future once they go off contract.

Several of these moves have resulted in less-than-stellar earnings performances today, but the trade-off is that many of these earnings hits are non-cash impairments that don't affect the company's ability to generate cash on a day-to-day basis.

The other thing that makes Transocean look that much more compelling today is that it has a huge pile of cash and a manageable debt profile. Management is expecting the market for offshore rigs to remain rather weak for at least another year or so, and so it's using its contract payments today to shore up the balance sheet and get ready to weather the storm.

The only reason I'm hesitant to buy this stock today is that the outlook for offshore oil drilling may get hit much harder over the next few years than originally anticipated. Costs for shale drilling in the United States have gone down much faster than for offshore operations, which means that these are the marginal-cost barrels that will get the ax first when production companies are making budget decisions. If I can see Transocean secure contracts for rigs in this downtime I may change my mind, but until there's a little more clarity around the role of offshore drilling, I'm going to be hesitant adding any more exposure to offshore rigs to my personal portfolio.

Matt DiLallo: I've owned units of Linn Energy since not long after it went public nearly a decade ago. It was an investment that had been working out just swimmingly until oil prices collapsed last year. Here's a chart that shows the total return since my initial purchase date. 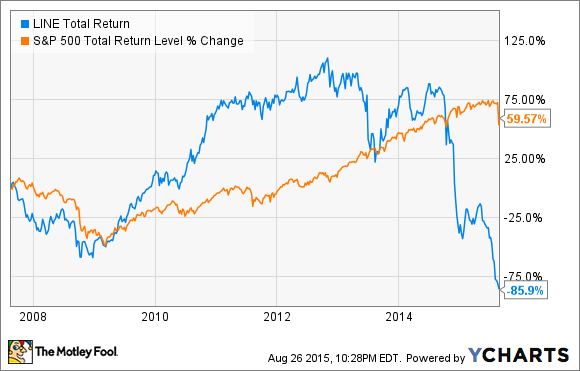 Until last year, my initial investment in Linn had vastly outperformed the broader market. That gain is now all gone, as is most of my initial investment. And most of my subsequent investments. Still, there is just this part of me that wants to take another swing. It's a company I know very well. I don't see bankruptcy in Linn's future, as I just don't believe $40 oil is the new norm, for a whole lot of reasons that are too numerous to list here.

That said, I just can't pull the trigger. Maybe I'm once bitten, twice shy. Or maybe I just don't want any more of my capital to be incinerated because the market could very well stay irrational longer than Linn can stay solvent. However, I will say that I am thinking long and hard about adding another helping of Linn, if for nothing else than on the pure speculation that it doesn't end up going under. Linn's current $2-per-unit price could in hindsight be the steal of the oil market's crash. I just have to be greedy enough to take advantage of the current fear, and I'm just not there -- yet.