Two of the hottest topics in the investing space are solar and 3-D printing. Both have the potential to disrupt existing systems for energy & manufacturing as well as decades of growth potential. Perhaps you are looking at both as potential investments, but aren't quite sure which one to pick. So we asked three of our contributors to weigh in on which one they think will be the better investment over the long term. Here is what they had to say.

Steve Heller (3-D printing): As the chart below illustrates, the last couple of years have been an absolute bloodbath for 3D printing stocks, and a painful lesson that strong industry growth doesn't always translate into positive investment outcomes. 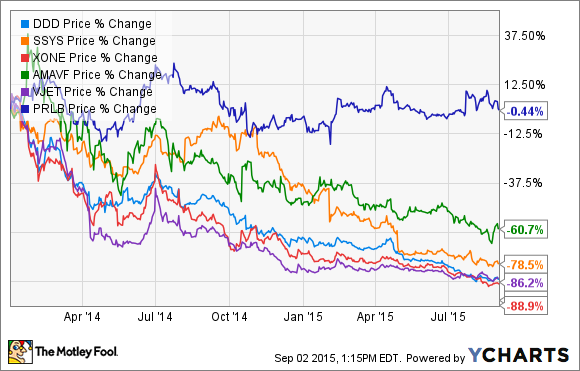 Looking back, many 3D printing stocks struggled with balancing execution and rapid growth, resulting in a string of disappointing earning reports, operational inefficiencies, and distracted management teams. It also hasn't helped matters that the competitive landscape is about to intensify with the imminent threat of well-funded outsiders entering the fray, and 3D Systems and Stratasys have been dealing with softening customer spending in recent quarters.

However, despite the challenges that 3D printing stocks have been facing, the longer term growth prospects remain attractive. According to Wohlers Report 2015, a leading 3D printing insights report, the industry is expected to generate more than $21 billion in worldwide revenue, more than a four-fold increase from 2014 levels. If this growth forecast pans out, today could prove to be an early inning investment opportunity. 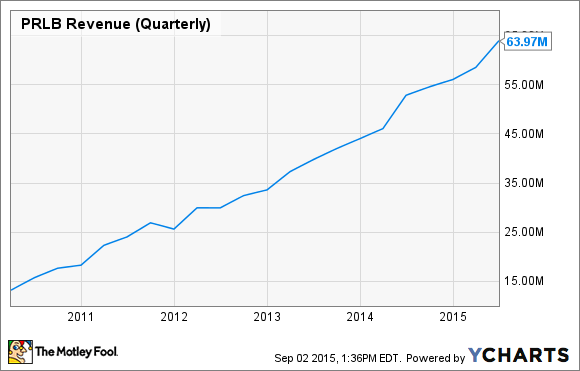 From a long-term perspective, Proto Labs appears better equipped to handle a rapidly changing 3D printing industry better than other 3D printing stocks that sell hardware, which run the risk of being disrupted by superior technologies. And with a market cap of around $1.9 billion and opportunity worth around $7 billion, Proto Labs could be poised to reward shareholders for years to come.

Travis Hoium (Solar): 3D printing has been a useful and fun technology for decades in the product development and engineering space. Since I made my first 3D printed parts nearly 15 years ago the technology has improved, costs have come down, and 3-D printing has even become possible for the masses. But it's still a relatively small market, measured in single billions of dollars, and disruptive technology is always challenging large rivals (see 3D Systems or Stratasys' acquisitions over the past five years).

The solar industry, on the other hand, is a market that is already worth over $100 billion annually, and it's only scratching the surface of disrupting an annual $2 trillion electricity market. The sun's energy touches nearly everything on earth, meaning the potential for solar is almost limitless. And the technology isn't changing nearly as fast as 3-D printing. While there will be lots of losers for investors in the solar industry, finding differentiated technology makes it easier to predict who the winners are and will be long-term.

Despite all of the opportunities to invest in solar, SunPower (NASDAQ:SPWR) and First Solar (NASDAQ:FSLR) are really the only two solar stocks (outside of yieldcos) that I would touch today. SunPower makes a solar cell that's fundamentally different from over 90% of the traditional cells made in the world today, allowing it to make a panel that's 21.5% efficient. That compares to 14%-16% for most commodity panels.

First Solar is the only major manufacturer to make a thin-film product, which has long been lower efficiency, but also costs less than the products of its competitors. As costs dropped, that calculus changed, and First Solar's cost advantage dried up. But the last year has seen First Solar make vast improvements in efficiency, now exceeding that of most conventional solar panels. The advantage First Solar has is better performance in harsh environments, as well as low manufacturing costs as it improves processes. Now that efficiency isn't a drag, this should be a top solar stock.

Then we add in the benefits of 8point3 Energy Partners, a yieldco SunPower and First Solar launched together earlier this year to own solar projects long-term, and you get a great way to play the solar industry. 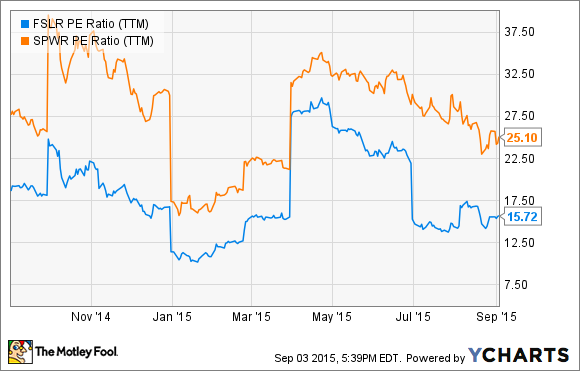 With both stocks trading at reasonable earnings multiples, growth potential that could be 20x or more of current revenue, and technology that puts them ahead of competitors, I think SunPower and First Solar are not only the best ways to play solar, they provide a much better opportunity for investors than 3D printing stocks.

Jason Hall: Travis and Steve both make compelling arguments, and frankly, I think both are right. However, I think it's also just as important to point out another commonality -- beyond huge growth potential -- that these two industries share:

There are only a few great companies, but a lot of stinkers.

In other words, it's probably best for most investors to not get too caught up in one industry, unless (like Steve and Travis) you happen to be a real expert, and instead focus on well-run companies with great prospects, whatever industry they are in.

That said, SunPower, First Solar, and Proto Labs are three great companies with very strong positions in their industries, and a lot of momentum behind them for plenty of growth. Will companies like 3D Systems and Stratasys return to their former heights and reestablish themselves in 3D printing? It's possible, and as a shareholder I'm counting on it.

But as things stand today, the three companies Travis and Steve highlighted are some of the very best companies in Solar and 3D. Better to invest in these great companies, versus making a bet on a single industry and losing big on lesser quality companies.

As someone who has been burned from risky bets in both industries, I can attest to that.

Those kind of industry disruptions create some massive winners but also some big losers along the way. It's better to understand the risks before jumping in, as Jason can attest first hand.