Please ensure Javascript is enabled for purposes of website accessibility
Log In Help Join The Motley Fool
Free Article Join Over 1 Million Premium Members And Get More In-Depth Stock Guidance and Research
By Andrew Tonner - Sep 7, 2015 at 8:20AM

Apple investors could benefit tremendously from understanding a few of the finer points of Apple's critical Services business.

With the iPhone accounting for 56% of Apple's (AAPL 4.08%) $129 billion in revenue  last year, smaller reporting segments can easily be left by the analytical wayside.

Although suffering from recent declines in growth, Apple's iPad segment would still rank as the 122nd largest company in America by revenue as a standalone enterprise. Does that change your perspective of Apple's seemingly struggling tablet franchise? It did mine.

Similarly, Apple's Services division also probably carries greater economic weight for the world's largest tech company than many realize. And even more importantly, its significance also lies well beyond pure profits, and Apple investors will benefit tremendously in understanding a few of the finer points of Apple's critical Services business.

The real numbers behind Apple's services division
Apple combines a number of its core software offerings in a single reporting segment it calls Services, which consists of sales from the iTunes Store, the App Store, Apple Pay, and more. And just as Apple's Other Products reporting segment helps obfuscate highly relevant investment data such as Apple Watch revenue, the jumbled nature of Apple's Services segment similarly makes calculating the revenue for each specific software business quite difficult.

Apple's SEC filings indicate that the iTunes Store, which comprises iTunes and App Store revenue, contributed roughly 56% of Apple's total Services revenue, with other areas such as Apple Care and Apple Pay comprising the balance. However, iTunes carries by far the most strategic weight for Apple's overall business health. And it's a far larger enterprise than many realize. 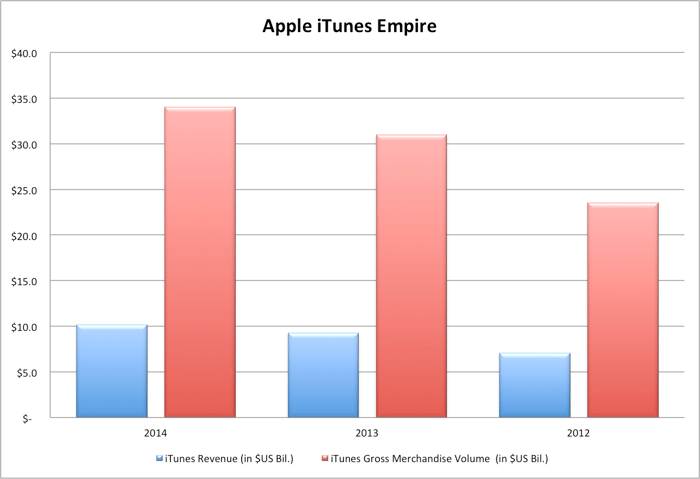 Because Apple passes along 70% of all iTunes and App Store sale to the content owners, the revenue figures it reports dramatically understate the real dollar-value amount consumers spend on digital media and software through Apple. I use the term gross merchandise volume, or GMV, a term online retailers use for the total amount of spending on their platforms, to reflect the amount consumers and businesses spent on Apple's various digital wares over the past several years. Viewed through this lens, Apple's iTunes business produced about $34 billion in "sales" last year, putting it in alongside some of the largest companies in America.

Specifically, Apple's iTunes as a standalone entity would claim the No. 94 position in the U.S. Fortune 500 on a GMV basis. By some estimates, iTunes sans App Store transactions already rivals annual global box-office receipts, which also speaks to the rarely discussed cultural power that Apple also wields. And the real point is that iTunes, like the iPad, is yet another likely underappreciated corporate giant lurking within Apple's massive reporting structure. And though iTunes' economic might is a noteworthy enough reason for this article, it also bears noting that iTunes' importance to Apple as a whole extends well beyond its economic output.

The glue in Apple's ecosystem
Apple's distinctive hardware design and its iconic branding also influence its ability to sell its hardware at premium prices that no other tablet or smartphone company can charge. However, it's Apple's software and content offerings that form the mortar in Apple's financial empire.

The software from Apple's App Store and the digital content from iTunes and iBooks are what truly define the user experience that keeps consumers on Apple's closed-wall iOS software platform. It's what users see and touch whenever they open their smartphones and tablets. Without this critical component, Apple's hardware offerings simply become nicely designed paperweights. It's the software that keeps users coming back for Apple products. Whether consciously or unconsciously, these offerings create a real "switching cost" for consumers if they ever opt to gravitate away from Apple's ecosystem in favor of an Android-based device. And for this reason, one can argue that Apple's software division drives a much larger percentage of its revenue than even the GMV figures indicate.

This dynamic works in both directions, though. As we might be finding out with the rollout of Apple Music, already established competitors such as Spotify might make Apple's late entry into the on-demand music streaming market more difficult.  Either way, though, examining Apple's less-discussed reporting segments often uncovers important lessons about both the real economic value of segments such as iPad or Services. And also more importantly, it helps provide a clearer vision of how Apple's interdependent hardware-and-software business model truly powers the company's massive profit centers.