The supermarket giant is tapping yet another popular trend.

Kroger Inc (KR 0.28%) has separated itself from its grocery store rivals during the past few years because of one big reason -- it continues to innovate. As organics became more popular, the company made a canny move into the segment with its Simple Truth line, which has since grown to be a billion-dollar brand.

The parent of brands like King Sooper's and Ralph's has also scored by revamping its coffee selection and offering more prepared foods. For instance, the company is now the nation's largest retailer of sushi.

Additionally, Kroger has stepped up its e-commerce efforts, offering in-store pickup at 160 Harris Teeter stores. For all those reasons outlined in its customer-first strategy, the company has gained market share for 11 years straight, and has seen comparable sales increase in each of the last 46 quarters.

It's also for that reason that the stock has taken off since 2012, more than tripling in that time frame. 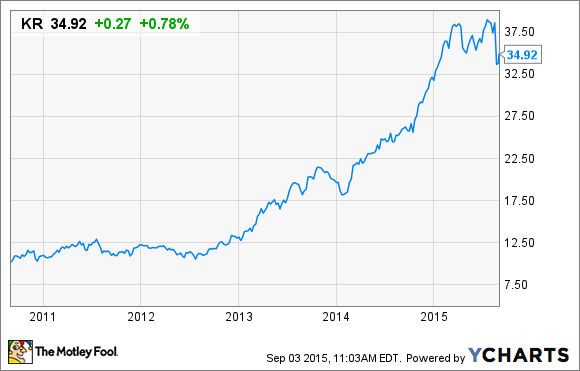 Now, Kroger is making yet another bold move, stepping up its service of craft beer. Kroger is adding beer stations in its stores in the Cincinnati market, and has big plans to expand a program it actually started back in 2003, to better compete with Wal-Mart. Customers at the newly added stores will be able to purchase or refill growlers at the store, and Kroger will offer tastings and other such events and promotions.

Wine will also be available alongside the beer taps. Jason Milburn, Kroger's national beer director, explained the move by saying, "Wine and growler bars are a natural evolution for our adult beverage departments -- by adding growlers, we are able to introduce our customers to new and emerging breweries that are only available on draft." Milburn also said that it helps elevate the brand and in-store experience, and brings in a more discerning kind of customer for quality offerings.

Jumping on a trend
Kroger's latest effort is a sign that another niche trend is going mainstream. The small-brewery movement is exploding nationwide, with more than one new brewery opening a day, according to Brewers Association. In 2013, sales of craft beer, which is generally defined as beer with traditional ingredients made by independent breweries with production of less than 6 million barrels a year, jumped 9.6%, while overall beer production fell 1.4%, indicating tough times for the macrobreweries.

The skyrocketing popularity of the small-batch beers, which tend to be fuller and more flavorful than leading brands like Bud Light, shouldn't come as a surprise, however, as it essentially mirrors other patterns in the national palate. Just as consumers are moving away from conventional produce and meat to organics, and are ditching traditional fast food for newer and healthier fast-casual chains, they are increasingly choosing to grab a craft beer instead of the mainstream brands.

There's another element in Kroger's favor, as well, as it rolls in out the growler program. Craft beer drinkers tend be wealthier than the national average, with Neilsen reporting that 59% have annual incomes of $75,000 or more. This makes it an attractive market for Kroger to tap into.

Kroger started the program in Arizona in 2003, and during the years, expanded to Columbus, Ohio, and Atlanta; but it began pushing it more than aggressively this year with rollouts in stores from Virginia to New Mexico, as well as at its Fred Meyer and QFC locations in the Pacific Northwest.

As Kroger searches for more ways to juice its sales, craft-beer service should offer a nice bump to both revenue, and its image. Investors can drink to that.