Juno Therapeutics is a speculative biotech stock that may be worth the risk. Here's why.

Juno Therapeutics (JUNO) has quickly established itself as a top dog in the high-profile cancer immunotherapy space through an uber aggressive approach to M&A, as well as the clinical development of its chimeric antigen receptor (CAR-T) and high-affinity T cell receptor technologies (TCRs).

Since its IPO, the drugmaker has acquired smaller peers like Stage Cell Therapeutics GmbH and X-Body, struck major research deals with MedImmune and Celgene Corp. (CELG), and, most impressively, advanced its lead clinical candidate, JCAR015, into a pivotal trial for adult patients with relapsed/refractory acute lymphoblastic leukemia (ALL).

But it hasn't been all smooth sailing for the developmental-stage biotech. Concerns over the safety of CAR-Ts and their related counterparts, TCRs, due to a potentially lethal side affect known as cytokine release syndrome, as well as some early studies suggesting they may be ineffective in solid tumors, have made Juno one of the most volatile stocks in the healthcare sector this year: 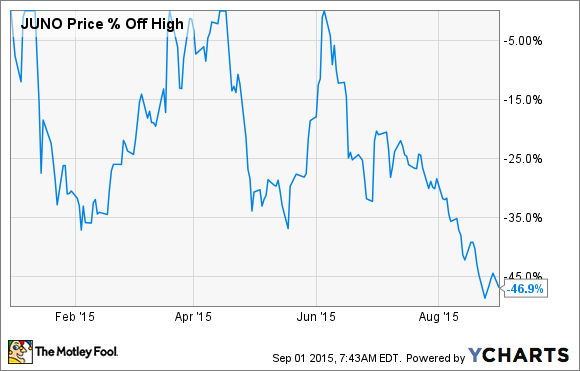 As the chart above shows, Juno's shares are well off of their recent highs right now, and the stock appears set to remain volatile going forward due to the lack of a strong institutional investor base. In fact, Juno's stock saw a net decline of 2.8% in holdings by major funds in the second quarter, leaving it with less than half of its outstanding shares in the hands of institutions at the end of the last quarter.

Pushing all of this negativity aside for the moment, I think Juno actually stands out as a compelling speculative biotech stock that investors should have on their radars. Here's why.

Juno's $1 billion deal with Celgene sets the company up for the long term
Earlier this year, when Celgene and Juno announced a 10-year collaboration worth $1 billion in total payments, the Street thought Celgene had grossly overpaid to gain access to this technology. I have a different take altogether.

At this year's ASCO meeting, Juno presented early-stage data for JCAR015 in adult ALL patients that was simply amazing. Complete remission rates came in at 87% in evaluable patients, and 81% of these lucky individuals showed minimal traces of disease upon follow-up.

To put this number into context, more typical response rates for this patient group range from between 25% to 50%, depending on if they went into remission in the first round of treatment, and the length of that remission.

Juno's experimental therapy is therefore, so far, producing unprecedented levels of efficacy in adult ALL patients. However, investors shouldn't forget the study's extremely small sample size of 39 total patients, and the fact that nearly a quarter of the patients on the therapy experienced severe cytokine release syndrome.

Now, that's just one of Juno's many promising clinical candidates for hematological malignancies, meaning this biotech has multiple potential blockbusters under development.

The Celgene deal gives Juno a massive $1.31 billion pro forma cash position. So, at current burn levels, Juno should easily be able to see JCAR015 through to the end of its ongoing pivotal trial that is expected to wrap up in 2017, and continue to build out its burgeoning pipeline at the same time. That's a rare situation in the developmental-stage biopharma arena, and it should allow Juno to advance its clinical program without eroding shareholder value via dilution.

Is Juno worth the risk?
The outstanding safety issues, along with the small sample sizes of the studies completed on CAR-Ts to date, certainly warrants caution. After all, there is no guarantee that the serious adverse events associated with these therapies will prove manageable, or that these impressive early-stage results will be replicated on a larger scale.

Having said that, I personally think CAR-Ts will prove to be important new therapies for several sub-populations of patients with blood-based disorders, and their immense benefits will ultimately outweigh their risks in some, but perhaps not all, patient sub-groups.

So, I'm fairly optimistic that CAR-T research will lead to commercially available products within the next three to four years, and Juno is probably going to be among the first to reach the commercialization stage. Juno thus looks, to me, like it offers a compelling risk to reward ratio for investors who don't mind some heavy short-term volatility.