Please ensure Javascript is enabled for purposes of website accessibility
Log In Help Join The Motley Fool
Free Article Join Over 1 Million Premium Members And Get More In-Depth Stock Guidance and Research
By Anders Bylund - Sep 8, 2015 at 11:44AM

Media General is buying the company in a $3.1 billion deal, financed by $2.8 billion of fresh debt. 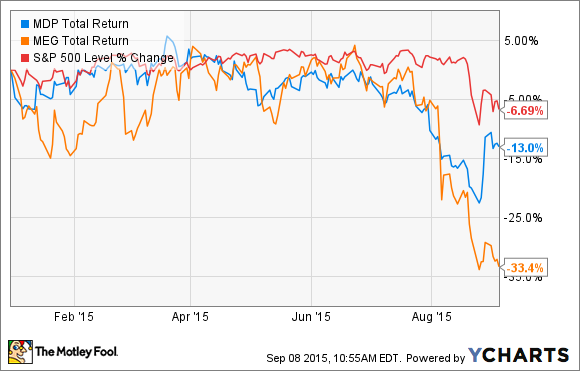 What: Shares of Meredith Corporation (MDP) jumped as much as 11.7% higher on Tuesday morning. Fellow media properties operator Media General (NYSE: MEG) announced that it is buying Meredith in a $2.4 billion cash-and-stock deal. Media General stock rose as much as 8.9% on the same news, before falling back to a more modest 2% gain. By 11:40 a.m., MDP stock was up 9.6% from the previous close.

So what: If approved by shareholders and regulatory authorities, this merger will create the third-largest owner of local network affiliates in America. Together, the new Meredith Media General business will reach about 30% of American households. The companies hope to boost their current combined cash flows by roughly 10%, thanks to synergies, other cost-cutting opportunities, and cross-selling tactics.

Now what: Meredith shareholders will receive about 67% of their payment in cash, and the rest in shares of the new company. Media General owners simply get one share of Meredith Media General for each of their old stubs. Including Meredith's $772 million of net debt balances, the total enterprise value of this merger will land at $3.1 billion.

To finance this merger of equals, Media General has secured $2.8 billion of fresh debt from two large banks.

In some markets where both of these companies already own broadcast TV stations today, a few stations will be sold to other companies in order to meet regulatory requirements. This includes areas such as Portland, Ore., Nashville, Tenn., and Springfield, Mass.

Media General is known for its healthy portfolio of digital media channels, including syndication powerhouse Federated Media. Meredith brings many fast-growing media markets to the table, alongside a strong focus on content and products designed for female audiences. Together, the management teams hope to see these strengths combine and create brand-new business opportunities.

Both stocks have struggled in 2015; As of Friday night, Media General shares were trading more than 33% below last December's pricing. Will this deal's economies of scale put a stop to that painful slide? That will depend on how effectively the new company can use its established digital business channels.