The agriculture machinery maker is having a tough 2015, but what does management want you to know about its current prospects?

The best-case scenario for investors in Deere & Company (DE 1.76%) is that crop prices rise, leading to an increase in farmers' incomes and ultimately a pickup in spending on large agricultural machinery. However, until that happens, the company will have to weather the storm of declining sales and weakening economic conditions within emerging markets. The question now is: How is the company adjusting to weakening conditions? Here is a look at five things you need to know about Deere's current trends.

1. Construction sector disappoints
I've covered the third-quarter results in more detail elsewhere. Deere downgraded its full-year expectations for its Construction and Forestry equipment sales, alongside a reduction in its forecast for Agriculture and Turf sales. The latter was hardly a surprise, but the former -- where underlying sales growth was reduced to a negative 2% from a positive 5% previously -- was a disappointment.

On the earnings call, Manager of Investor Communications Susan Karlix outlined a mix of reasons that Deere's construction equipment order book was weakening:

There is little Deere can do about energy prices and economic growth, so you will just have to watch and wait, but the weather issue in the first half of 2015 could lead to a pickup in construction activity in the second half -- something to look out for.

2. Early orders weak
UBS analyst Steven Fisher asked Deere's management how its early order programs were faring and, unfortunately, Director of Investor Relations Tony Huegel's response indicated potential weakness. Huegel outlined how "certainly we are seeing in those early order programs orders being off year-over-year, which historically would indicate some additional weakening as you move into 2016."

3. U.S. farm crop cash receipts
Deere's management has long argued that farmers' cash receipts correlate with agriculture equipment sales. As such, there is cause for optimism around Deere's forecast for an increase in cash receipts from crops in 2016. Although, as you can see in the chart below, total cash receipts are forecast to decline in 2016. 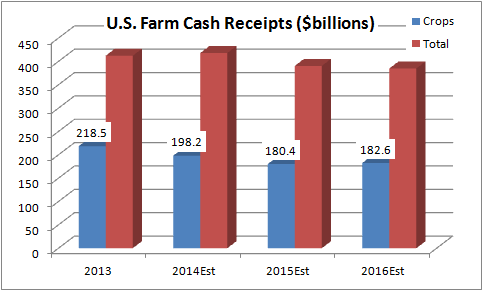 However, Huegel's remark to "remember it's a combination of both current year and prior year" reminded investors that sales in 2016 aren't just about cash receipts in 2016. Indeed, Huegel went on to outline that, given current conditions and forecasts, "it is likely that you would see some reduction, further reduction in large Ag sales retail sales next year."

In other words, don't get too excited by the prediction for an increase in U.S. farmers' cash receipts in 2016.

4. Inventory situation
Whenever sales decline in an industry, it's always a good idea to keep an eye on inventory levels. Bloated inventories usually signal trouble, as companies are often forced to cut prices in order to clear them. On the earnings call, Huegel was asked a question on new and used inventory. He went on to outline that Deere continued to have new inventories at "50% or less as you look at inventory as a percent of sales," in contrast to its rivals'.

5. Pricing
Given the weakening sales and orders environment, you might expect that pricing would come under pressure -- particularly as Deere tries to reduce inventories. Moreover, as noted in a previous article, the full-year forecast for price realization was taken down to 1% growth from 2% previously.

This is clearly a net negative, but Huegel's discourse suggested it wasn't as significant as it superficially looks. He argued, "Both last quarter and this quarter there is some fair amount of rounding to get to that whole number. So we've been fluctuating candidly right around 1.5 points." Moreover, he suggested, "There hasn't been a substantial change in the pricing environment since last quarter."

This is interesting commentary and indicates Deere is holding pricing well in a difficult environment.

What does it mean for Deere investors?
Conditions for Deere appear to be gradually getting worse in 2015, and the early indicators for 2016 (early orders and estimates for farmers' cash receipts) are suggesting ongoing weakness. In addition, by management's own admission, its inventory of used equipment continues to pose a challenge -- something that could threaten pricing power in future quarters.

The investment case for buying Deere still rests on the idea that crop prices will bottom out, but the current trading environment is weakening for Deere, and the company continues to face challenges with reducing its inventory. All told, near-term risk is rising even if the long-term case for buying the stock remains intact.