Please ensure Javascript is enabled for purposes of website accessibility
Log In Help Join The Motley Fool
Free Article Join Over 1 Million Premium Members And Get More In-Depth Stock Guidance and Research
By Sam Mattera - Sep 8, 2015 at 7:22AM

On Sept. 9, the iPhone maker could take a shot at Microsoft and Sony.

Apple (AAPL 1.62%) is widely expected to unveil the next-generation version of its Apple TV set-top box on Sept. 9. According to a report from 9to5Mac, gaming will be a central focus. With Apple's strong developer support and enthusiastic customer base, it could provide tough competition to Microsoft's (MSFT 1.07%) Xbox One and Sony's (SONY -0.11%) PlayStation 4. Although those consoles do have some advantages over what Apple's likely to be able to offer. 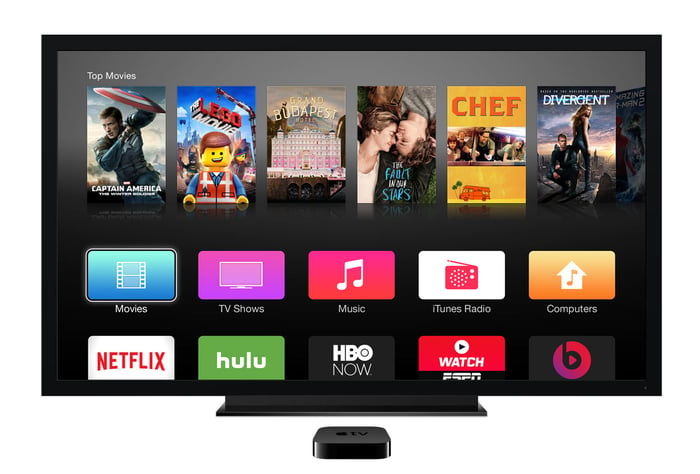 Apple has many advantages
Gabe Newell's company, Valve, has made several of the most well-regarded video games in the industry's history (Half-Life 2, Left 4 Dead) and runs Steam, the leading digital distribution platform for PC gamers. In recent years, Valve has made overtures at the console space, working with firms like Dell to develop gaming PCs intended for the living room.

Newell has been publicly warning about the possibility of Apple dominating the console space since at least 2011, and he reiterated that early in 2013 with the quote at the top of this article. Others, like Xbox co-creator Nat Brown, have expressed similar sentiments.

It's easy to see why.

Apple's App store generates billions of dollars for developers. In 2014, Apple paid developers $10 billion in total, and that figure is likely to be far higher this year. Games represent a massive percentage of this revenue -- estimates from Distimo have pegged the figure at over 70%. Gaming firms, including King Digital and Supercell, have built multibillion-dollar businesses with the App Store, and it's even attracted the interest of industry pioneer Nintendo. In other words, there should be no shortage of games released for the next Apple TV.

And no shortage of players, either. Unfortunately, Apple doesn't release its exact Apple TV unit sales on a quarterly basis, but it has said that it's sold at least 25 million Apple TVs to date. The inclusion of the App Store, and other likely improvements -- including alleged Siri support for voice search -- should entice many existing owners to upgrade, and could pull in some new buyers.

According to Buzzfeed, the new Apple TV will retail for just $149 -- far less than the $349 Microsoft charges for the Xbox One and the $399 Sony is still asking for PlayStation 4. Sony has sold more than 25 million PlayStation 4s to date, an impressive figure, but with a lesser price point, it's not inconceivable that Apple could match that within a year.

Of course, the new Apple TV isn't likely to offer as many features or as much power as its console competition, but that could change in time. Historically, consoles have been static platforms. The Xbox 360 (released in 2005) and the PlayStation 3 (released in 2006) are still sold at retail today, packing largely the same hardware as they did when they debuted almost a decade ago.

Apple, in contrast, could use the same annual refresh cycle for the Apple TV as its other products, while maintaining a constant price point. The $149 Apple TV released in 2015 may not be able to match the Xbox One, but the 2017 model certainly could.

But Apple will face numerous hurdles
Still, there are a number of challenges Apple is likely to face in its attempt to conquer the living room.

Both Sony and Microsoft own dedicated game studios and strong intellectual property, which they use to entice gamers to support their platform. If you want to play Halo, Gears of War, or Forza, you have no choice but to purchase an Xbox. If you want the latest God of War, Uncharted, or Gran Turismo game, you'll need to buy a PlayStation.

Apple doesn't own a game studio or any well-regarded intellectual property. Apple has the cash to create its own studious or acquire them, but at least initially, it will have to rely on third parties.

There's also the question of online infrastructure. Microsoft's Xbox Live and Sony's PlayStation Network play a key role in the success of their respective consoles. The most popular game series -- Call of Duty, Destiny, Madden, among others -- are online, multiplayer-focused affairs. Xbox Live and PlayStation 4 allow gamers to connect with their friends, interact, and play games together. Apple has its counterpart in the form of Game Center, but it's not particularly useful or popular (Mashable's Raymond Wong describes it as a "ghost town"). It will need substantial upgrades if Apple is going to succeed in the console space.

Then, there's the question of controllers. Apple is allegedly planning to overhaul the Apple TV's remote, with better buttons, a touchpad, and a gyroscopic sensor. That could allow it to function as a controller for relatively basic games, but more involved titles would need something better.

Apple's iPhones and iPads support third-party Bluetooth controllers, and the new Apple TV should as well. Unfortunately, that would require consumers to make an additional investment. Many probably won't, and even among those who do, different style controllers could make it hard for developers to create compelling titles.

Finally, the issue of storage: According to 9to5Mac, Apple is only planning to equip its next generation box with 8GB or 16GB of internal storage. For a living room gaming device, that simply won't do.

The Xbox One and PlayStation 4 are offered in 500GB and 1TB varieties because modern games are huge. The Witcher 3, for example, takes up 50GB. Apple currently enforces a 4GB cap on the size of iOS games, which is adequate for relatively simplistic mobile titles, but not nearly enough for a more cinematic experience. In order for the Apple TV to compete with traditional consoles, this cap will need to be raised and it will need to provide ample (perhaps hundreds of gigabytes) worth of storage.

All of these challenges could be overcome in time, but they could limit the Apple TV's appeal to gamers.