The clothing and apparel company fell hard after another disappointing quarter. Here's what investors need to know.

What: Shares of Gap (GPS -8.32%) fell 10.1% in August, according to S&P Capital IQ data, as the broader market pulled back following the clothing retailer's slightly weaker-than-expected second-quarter results. So far in 2015, Gap stock has fallen more than 20%, significantly underperforming the S&P 500's more modest 3% decline: 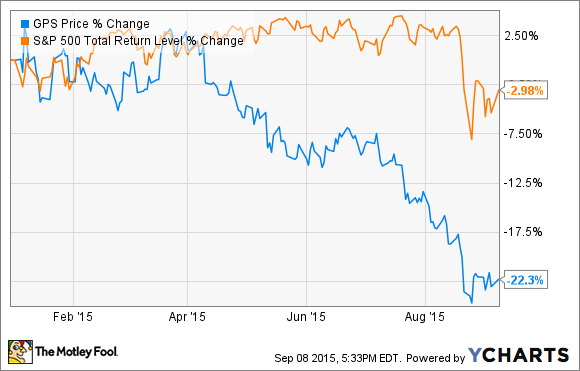 So what: Specifically, net sales for the quarter fell 2% year over year to $3.9 billion, hurt by a 6% drop in comparable store sales at Gap and a 4% decline in comps at Banana Republic, but partially offset by 3% comparable store sales growth at Old Navy. To its credit, currency fluctuations also played a significant role in holding back the top line; excluding the negative effect of currencies, revenue would have been roughly flat year over year. And analysts, on average, were anticipating only slightly higher revenue of roughly $3.93 billion.

For perspective, last quarter Gap management noted while Old Navy was performing well, they were still disappointed with the overall performance at Gap and a "mixed" showing from Banana Republic. As such, they announced strategic actions to effectively translate Old Navy's proven product processes to improve the consistency for on-trend, on-brand execution every season at their fledgling store concepts. In addition, Gap is closing select North American locations "to create a smaller, more vibrant fleet of stores."

Consequently based on generally accepted accounting principles, Gap achieved net income of $219 million, or $0.52 per share. On an adjusted basis -- which notably excludes a $0.12 per-share negative impact from those strategic actions -- Gap saw net income of $0.64 per share, or in line with analysts' expectations.

Now what: Gap's results weren't terribly off the mark, and it's evident the stock's most significant drop in August directly coincided with the broader market's plunge. Nonetheless, it doesn't help that the market hates the uncertainty of a business in transition, so Gap's more severe decline was hardly surprising. In the end, while I'm not personally eager to jump in today, with the stock trading at a low 11 times next year's expected earnings I think Gap is worth adding to your watchlist as it continues to make progress in that transition.