Boeing stock is beating General Electric so far this year, but the past is only prologue. Which one is a better buy going forward?

General Electric (GE 2.27%) and Boeing (BA 3.52%) are arguably two of the strongest and most respected industrial companies around. Boeing is beating General Electric so far this year, rising 4.6% versus a decline of nearly 4.2% for GE stock year to date.

However, investment decisions need to be based on forward-looking considerations, not past performance. In that spirit, our contributors share their points-of-view with our readers. Which one is a better buy going forward, General Electric or Boeing?

Andres Cardenal: I can see how Boeing could deliver big gains for investors over the medium term; however, I believe GE is a more sound choice from a long-term perspective. When picking an industrial company to invest in for decades into the future, you want to make sure the business is strong enough to go through any kinds of economic scenarios and changing industry dynamics, and investors would be hard-pressed to find a more solid and reliable industrial company than GE.

The company is expected to generate over $125.6 billion in total revenue this year, and it offers an unparalleled degree of diversification, with a leading global presence in industries such as power and water, energy, transportation, healthcare, aviation, and appliances, among others. GE is transforming its business and reducing its financial operations in order to better focus on what it does best. This should mean a more stable and better-aligned business for investors once the transformation is complete.

The company is also betting on growth and innovation via multiple initiatives, and the industrial Internet looks like a particularly exciting opportunity. Industrial Internet orders grew by a staggering 83% year over year, reaching $1.9 billion during the first half of 2015, so GE looks well on track to profit from an increasingly connected industrial world for years to come.

Daniel Miller: I think both of these companies make great additions to any portfolio looking for stable and consistent returns. However, if forced to pick between the two, Boeing would be my favorite because it offers both near-term and long-term upside for investors.

In the near term, Boeing has much upside to offer investors in terms of increasing cash flow and bottom-line earnings. Much of that upside resides with the company's revolutionary 787 Dreamliner, which is expected to become cash flow-positive sometime in 2016 as Boeing continues to increase production from seven per month in 2013 to 12 per month next year -- and as many as 14 per month toward the end of this decade.

Another positive for Boeing investors, in both the near term and long term, is the value returned to shareholders in the form of dividends. Sure, GE has a dividend yield of 3.8%, which is higher than Boeing's 2.8%, but take a look at the following graph, which puts the companies' dividend growth in perspective: 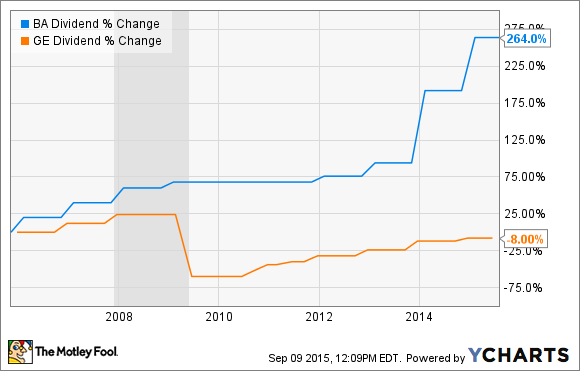 Boeing's dividend has soared in recent years, and the company even increased it during the financial crisis. That should only continue as Boeing generates more cash flow while it works through its total backlog of $488 billion -- yes billion, with a capital B, which is more than five years' worth of revenue -- as its production rate increases for its current bread-and-butter product, the 737. The 737's production should increase from 42 per month to 44 next year, to 47 in 2017, and up to 52 in 2018.

Boeing's long-term future looks just as bright. The company predicts the global commercial aircraft market will need more than $5 trillion worth of new or replacement aircraft over the next two decades. Also, if the U.S. government decides to lighten up on defense spending cuts years down the road, it would be a bonus for Boeing's defense, space and security business segment -- which has mostly become an afterthought for investors.

All in all, Boeing seems like a great addition for investors looking for a stable company offering upside in both the near term and the long term, and it'll pay you a rapidly increasing dividend while you wait!

Steve Heller: Between Boeing and GE, it isn't obvious to me which stock will outperform the other over the next three to five years. Frankly, both companies are solid investing candidates, and deciding whether Boeing or GE is a better investment largely depends on your personal investing style and whether you're comfortable investing in a company undergoing a massive transformation.

Boeing investors would have to be confident that the company will be able to work through its massive $431 billion backlog of nearly 5,700 aircraft and eight years of production time without any major issues. If successful, it'll effectively lay the foundation for Boeing to generate consistent and predictable cash flows, which could lead to future dividend increases, share repurchases, and future stock gains.

GE investors, on the other hand, would have to put their faith in management, believing that it can reinvent the company as a highly diversified industrial powerhouse. By 2018, GE wants only 10% of its operating earnings to come from outside its core industrial activities. This is a monumental task that involves making large acquisitions and divestments, significant restructuring charges, and all-around solid execution.

If GE can successfully transform itself, investors may begin to view the industrial giant in a more favorable light. After all, GE's goal is to create a company that's fine-tuned for industrial growth and less susceptible to financial shocks, which could improve the company's earnings prospects for years to come.

Ultimately, no matter which way an investor goes in this debate, execution is crucial for both GE's and Boeing's longer-term success. Essentially, Boeing has to deliver its backlog without getting bottlenecked and incurring outsize costs in production, while GE has to transform itself in a way that doesn't detract from its existing operations.