Halliburton Company and Laredo Petroleum teamed up to develop the Earth Model, which is really paying off in the current low oil price environment.

There's a widely held belief among the general public that oil and gas development isn't very technically advanced. That the industry still uses the same "technology" from a century ago. That, however, couldn't be farther from the truth.

On the contrary, shale development in the U.S. wouldn't have been possible if it weren't for the use of advanced technology that is critical to accessing the oil and gas that's tightly trapped in rock formations deep within the earth. One of the more impressive examples of this is the proprietary Earth Model developed by Halliburton Company (HAL -2.29%) and Laredo Petroleum (LPI -7.86%) that's being used to optimize the development of Laredo's acreage in the Permian Basin.

Building a better model
Unlike a conventional oil and gas reservoir, shale plays tend to be relatively thin rock formations that are stacked like a pancake below the earth. The Permian Basin of West Texas, in particular, is a play that's stacked with hydrocarbon bearing rocks. In the eastern part of the play, where Laredo Petroleum operates, there are more than four stacked layers to be developed.

Laredo realized early on that it needed to develop a proprietary database as well as a process to characterize each targeted reservoir. It sought out the help of Halliburton to develop what is now known as the Earth Model, which it is using to optimize the development of the play.

The foundation of the model is built on high-quality data including 3D seismic, microseismic, core samples, historical well performance data, and petrophysical information. That data is analyzed, processed, and then incorporated into its predictive 3D Earth Model, which is detailed on the slide below. 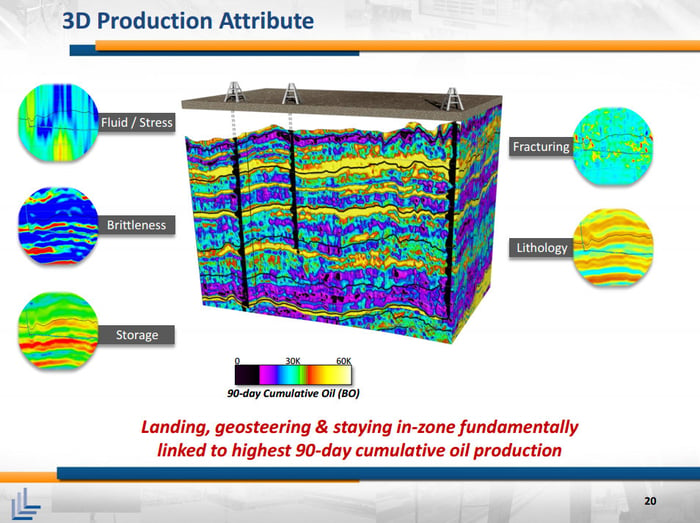 Optimizing development and returns
With that data in hand, Halliburton and Laredo Petroleum then use it to put together an optimized plan to develop the company's acreage. The data is used to decide well spacing, lateral length, and hydraulic fracturing design. The goal is to identify the best way to target the most hydrocarbon-rich rocks, or sweet spots, in order to maximize the recovery of hydrocarbons from the reservoir, which is key to earning a high rate of return. An example can be seen on this slide: 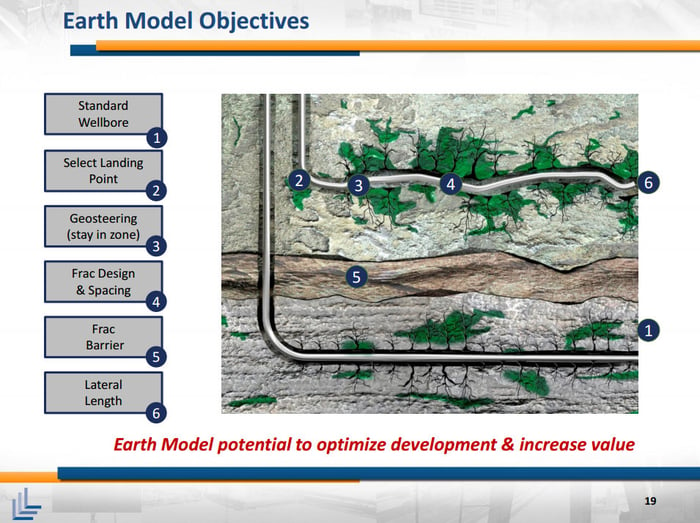 Laredo's investment in this technology is really paying big dividends during the low oil price environment. Because it is able to better target the best oil and gas zones, it is seeing improved well returns as it is recovering more oil and gas per well. In fact, just increasing its recovery of the oil and gas trapped in the rocks by 10% the company can improve its rate of return by 25%. That's paying big dividends in the current environment. According to CEO Randy Foutch:

Our production corridors and full field development strategy utilizing the Earth Model enhances the efficiencies and produces well returns commensurate with those seen in 2014, and enables the company to efficiently increase drilling activity. (Emphasis mine)

In other words, its returns in the current environment are now on par with those it was enjoying before the oil price plunge. Because of this, the company is now starting to accelerate drilling activity even at current prices.

Investor takeaway
Long gone are the days of the oil wildcatter ways of drilling on the hope of finding oil. Instead, oil companies like Laredo Petroleum are teaming up with oil-field service companies like Halliburton to not just drill wells but to use advanced technology to fully optimize the development of oil and gas resources as they can determine where to drill and how to best recover the resources trapped underground. For Laredo, its Earth Model is perfecting its drilling techniques and vastly improving well results so that returns are now on par with those prior to the oil price crash.