The last month shows why First Solar is one of the best stocks in solar.

What: Shares of First Solar (FSLR 1.70%) rose 10% in the month of August, made even more impressive when you consider that solar stocks in general dropped during the month.

The Guggenheim Solar ETF dropped 14% in the month, and losses were widespread as oil prices dropped.

So what: First Solar's stock jumped early in the month after the company reported first-quarter earnings. The gains tapered off later in the month, but that coincided with a drop in solar stocks generally.

The two things investors should know about the quarter was management's guidance for $3.30 to $3.60 per share in earnings for the full year and a 1.4% increase in panel conversion efficiency from a year ago to 15.4%. A more efficient panel will make the company more competitive when bidding on solar projects long term and will potentially lead to even higher margins. 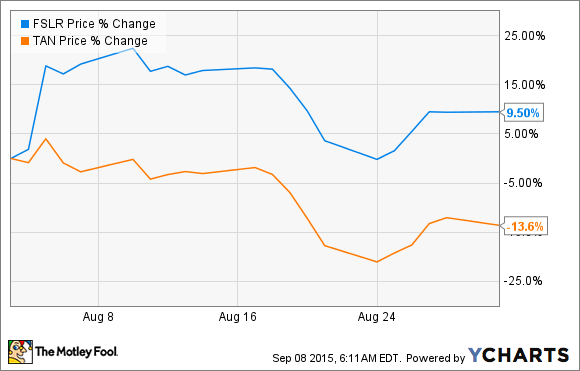 Now what: First Solar is one of the best companies in the solar industry, and its increasing profits while competitors are losing money is a testament to its position. With efficiency expected to increase toward 20% in coming years, its position as an industry leader should continue. And even after a strong April, shares trading at 13 times the high end of this year's earnings is a good deal for investors.