The head of Intel's PC group recently presented at an investor conference; here are three things he wants investors to know.

Kirk Skaugen, the head of Intel's (INTC -0.86%) Client Computing Group, which encompasses both the company's traditional PC business as well as its mobile business, recently presented at the Citi Global Technology Conference. During the presentation, Skaugen touched upon a number of topics that should interest current and potential Intel stockholders.

In this article, I'd like to go over the three points that I found most interesting from the presentation.

Talking about 2-in-1 devices
Skaugen made a pretty convincing argument that Intel's push to converge tablets and notebooks with 2-in-1 devices has been successful, with the key points visible in the following slide: 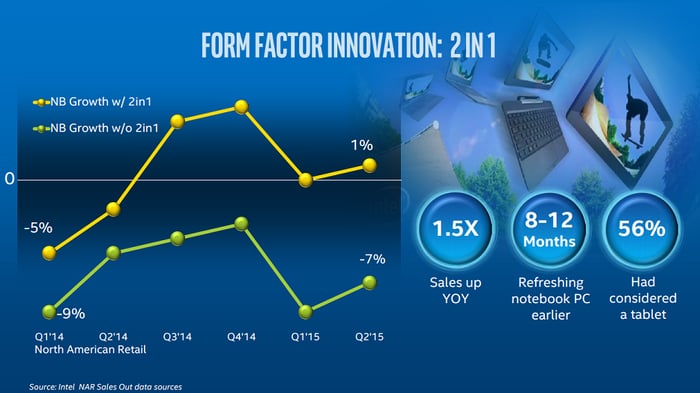 As indicated in the above slide, sales of traditional notebooks (which means no 2-in-1 devices) in North American retail have seen year-over-year declines for six straight quarters.

However, the picture changes once sales of 2-in-1 devices are factored in. In the first two quarters of 2014, although total notebook sales in North American retail still saw declines even with 2-in-1 devices were factored in, the rate of decline was materially lower.

And from the third quarter of 2014 to the second quarter of 2015, notebook sales in North American retail with 2-in-1 devices included have been flat to up.

Finally, 2-in-1 notebooks very likely have Intel's relatively higher average selling price Core-i series processors, while vanilla tablets either don't have Intel silicon at all or, if they do, probably use cheap Atom chips. So, from a revenue and ultimately profit perspective, the more that Intel can sway users from traditional tablets and to 2-in-1 devices, the better off its business should be.

Skaugen wants to grow PCs, isn't just content with flat
Intel's top brass have made it pretty clear at this point that they've accepted the harsh reality that the PC market isn't really a growth market. Indeed, Intel CEO Brian Krzanich said during the company's July 15 earnings call that his long-term forecast for the PC market is "relatively flat."

In his prepared remarks, Skaugen said that his job at Intel is "to grow PC, not to see it be flat which is kind of [Intel's] general public statement."

One interesting point that he made was that the company has been able to register fairly consistent year-over-year growth in notebook platform sales (aside from the second quarter, in which sales plunged 11% year over year) despite headwinds from three of its top five countries: Brazil, Japan, and Russia are down "20% to 40% plus."

Although Skaugen shied away from trying to predict the macroeconomic situations in those countries, he expressed confidence that those markets "will come back" at some point in the future. The implication here seems to be that when PC sales in these countries recover, Intel's PC processor sales should benefit nicely.

Is Intel worried about ARM-based notebooks?
During the conference, analyst Chris Danely asked Skaugen about his views about ARM (ARMH) processors potentially making their way into PCs.

Skaugen said that he thinks that Intel's competitive positioning with its Core family of processors is "very strong" right now. He also made it clear that as far as PCs go, he views Advanced Micro Devices (AMD -3.28%) as its main competitor in PCs -- not any of the ARM-based vendors.