Both Caterpillar Inc. and Cummins Inc. have been hammered this year, but which one is a better buy now? Our contributors weigh in.

Caterpillar (NYSE: CAT) and Cummins (NYSE: CMI) have long been considered top powerhouse industrial stocks, but this year hasn't been too kind to either: Shares of both companies have hugely underperformed the broader market, and mirroring each other closely on their way down: 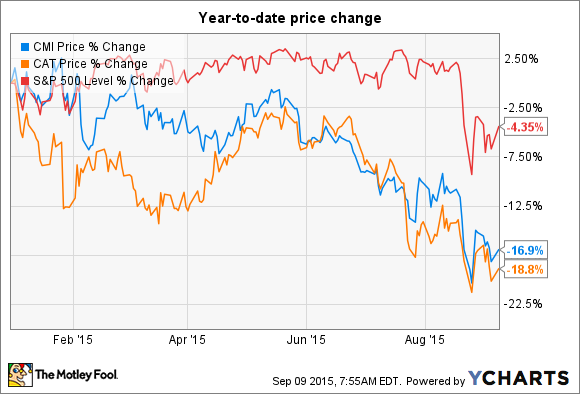 On a positive note, this downfall might present an opportune time for value investors to scoop up some shares in these iconic companies. To help you make an informed decision, we asked three of our contributors to choose between Caterpillar and Cummins as potential investments today.

Neha Chamaria: Frankly, I'm surprised by the weakness in Cummins' shares. While weak international markets are hurting both companies, Caterpillar's equipment business has suffered a major setback because of its significant exposure to the beleaguered mining industry. Cummins, on the other hand, continues to grow as nearly every country pushes for stricter emission regulations. Picture this: While Cummins is targeting 2%-4% growth in revenue this year, Caterpillar expects to end 2015 with 11% lower revenue.

Interestingly, Cummins is also gaining in China -- a market that has proved a major hurdle for Caterpillar in recent years. Cummins' revenue from China grew 6% year over year in Q2, with its engine market share jumping more than five percentage points to 15.5% through the six months ended June. Enforcement of NS4 emission standards is a significant growth catalyst in the near future.

Having cornered nearly 35% of the heavy-duty truck market and more than 70% of the medium-duty truck market in North America, Cummins has a strong moat. The company is also committed to returning 50% of its operating cash flow to shareholders in the form of dividends. If you can get all of this while the stock fetches under 13 times trailing earnings and 3.3% in dividend yield, I'd consider it quite a bargain.

Bob Ciura: At first glance, this match-up seems like a no-brainer. Cummins has handily outperformed Caterpillar over the past year. Cummins' stock is down 14% over the past 52 weeks, while Caterpillar has sunk 30%. The reason for this discrepancy is clear: Cummins is a best-in-breed manufacturer of engines and other automotive components, while Caterpillar is a heavy-machinery company caught squarely in the cross hairs of the commodity crash.

Caterpillar's equipment caters directly to the mining and energy industries. Although that is serving as a major headwind now, I favor Caterpillar over Cummins because the former will likely enjoy a stronger rally if and when commodity prices recover. Cummins is the safer choice now because, unlike Caterpillar, its core markets are holding up decently well this year. Cummins' revenue and earnings per share are up 5% and 11%, respectively, through the first half of 2015. By contrast, Caterpillar's earnings per share are down less than 1% in the same time. But that relative safety means Cummins may not have as much upside potential going forward.

Plus, thanks to Caterpillar's steeper stock price decline, its dividend yield has been elevated to 4.2%, almost a full percentage point higher than Cummins' payout. I view Caterpillar as the bigger risk-reward play. If commodity prices rise going forward, I'd expect Caterpillar to outperform.

Jason Hall: Looking at the long term, Caterpillar and Cummins both are probably great companies to invest in at the current levels. With that said, I'm going to side with Neha on this one -- sorry, Bob. Here's why.

To start, Cat is a much more cyclical business due to the fluctuations in demand for construction and mining equipment. These two industries seem to suffer boom and bust cycles that can pinch a supplier like Caterpillar and make it more difficult for the company to show sustained long-term growth.

Cummins, on the other hand, is more than just a best-in-breed engine maker for the automotive industry; it also supplies engines (and generators) for essentially every application around the globe, including onshore and offshore drilling equipment, maritime, locomotive, and other rail transportation just to name a few key ones. Yes -- automotive and heavy transportation applications are important to Cummins, but they are just the tip of the iceberg for this stalwart.

And it's this diversity of industry demand -- as well as Cummins' growing global presence -- that makes it a better long-term bet than Caterpillar.

Yes -- in the next couple of years Caterpillar stock might be a better performer because of the cyclical demand for its products and how beaten down it has been. But from the bigger picture, and the longer view, I'm counting on the company with less cyclical impact on its business and better growth prospects to be the better investment. And that's Cummins.