What: Shares of Ensco (NYSE:VAL) climbed more than 10% in August on some glimmer of hope that oil prices were on the rise. When that didn't happen, shares gave all those gains back in the first few trading days of September. 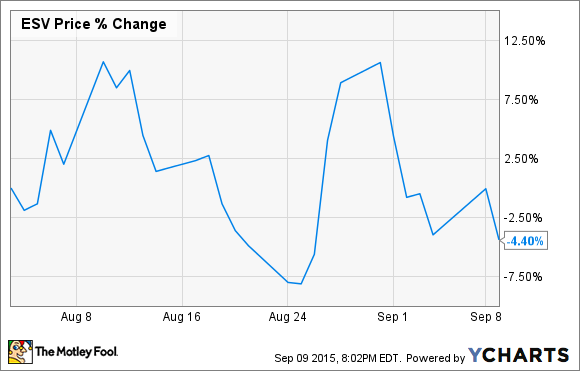 So what: It would be nice if every single price movement for a company had a clear explanation that materially affected the long-term outlook for a company, but the truth is that a company's shares can move all over the place for no reason other than speculation. This was pretty much the case for Ensco this past month. Although based on the company's most recent fleet status report that two of its floating rigs' contracts concluded in August without a new contract in place, there was no real reason for shares to swing so wildly, aside from oil prices.

One thing to note recently is that the company has said that it's executed several moves to reduce its costs, including reducing its headcount and slashing its costs related to idle and stacked rigs. While it would be preferred that Ensco find work for its rigs, the market for offshore rigs is just that weak right now, and any moves to reduce idle rig costs will probably lead to significant savings over what could be an extended period of weak demand.

Now what: Shareholders of Ensco -- or almost any other rig company, for that matter -- should plan on strapping in, because this will probably be a bumpy ride for quite some time. The thing that should give shareholders in Ensco hope is that the company is in a pretty strong financial position and has only four new rigs -- three jackups and one drillship -- currently under construction. These two elements suggest that the company has the legs to weather the storm for a while. The only question for investors is whether they have the patience to wait it out.