Please ensure Javascript is enabled for purposes of website accessibility
Log In Help Join The Motley Fool
Free Article Join Over 1 Million Premium Members And Get More In-Depth Stock Guidance and Research
By Tyler Crowe - Sep 10, 2015 at 7:05AM

Less-than-stellar earnings and fears of China's slowdown took yet another toll on Textainer's shares this past month.

What: Shares of Textainer Group (TGH 1.39%) declines in August after the company reported lower-than-expected earnings, as well as management's outlook that things could get a little worse in the coming months

So what: Pretty much all of the company's stock-price decline can be attributed to its earnings release. Shares declined nearly 20% in the couple of days following the earnings release, and aside from some movement that was probably related to the panic created by the Chinese stock market, they ended the month pretty much right where they were following earnings. 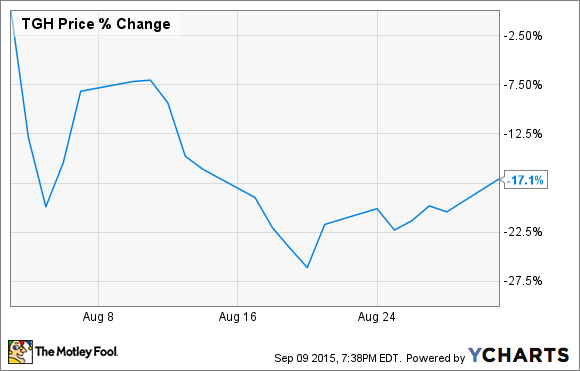 Even though the company was able to increase its container rental revenue in the past quarter, the rate at which it increased was lower than the growth of the company's fleet size. This means that the rental rates for Textainer's containers declined. Combine that with lower-than-expected sales of older containers, and the company's net income of $0.66 per share wasn't able to keep pace with Wall Street's expectations of $0.70 per share.

Now what: This year hasn't been kind to shareholders of Textainer thus far. Shares are down more than 53% since the beginning of the year, and fears that China's economy is slowing down has lots of investors nervous that demand for the company's containers will not be as robust over the next couple of years. One thing to keep in mind, though, is that containers are much like a commodity in the sense that they will go through cycles. It's hard to say whether we're reaching the bottom of this two-year slide in share prices or if there's more room left to decline. However, the company remains profitable and is continually investing in the business to maintain its market leading fleet of containers. A dividend yield in the 11.5% range and a history of preserving its dividend even in the rough times should give some solace to investors today.