Please ensure Javascript is enabled for purposes of website accessibility
Log In Help Join The Motley Fool
Free Article Join Over 1 Million Premium Members And Get More In-Depth Stock Guidance and Research
By Rich Smith - Sep 10, 2015 at 8:23AM

Jettisoning an underperforming foodservice business could be a good move for Manitowoc. But what does it mean for investors? 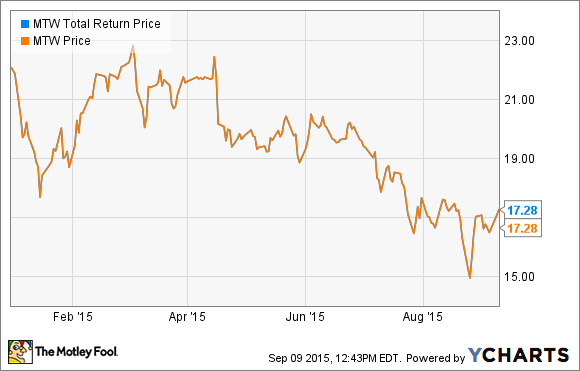 Congratulations, Manitowoc (MTW -0.26%) shareholders! Sometime within the next six months, you should own twice as many "Manitowoc" shares -- albeit, in two different companies.

This shouldn't come as a complete surprise. We've known for more than six months that Manitowoc management planned to split the company into two pieces, a "cranes business" and a separate, spun-off "foodservice business." But Manitowoc finally filed its Form 10 with the SEC last week, and now it's official. The spinoff has a green light, and is proceeding apace.

So here's what we know about it.

The basics
Manitowoc will split into two companies, alternately referred to as the RemainCo and the SpinCo, or the industrial crane business and the foodservice business. (Here's a trick to keep them straight: "crane" rhymes with "remain." So the company getting spun off must be... whichever one doesn't make cranes.)

Sketching out the broad outlines of the spinoff back in January, management explained that its remaining cranes business, "one of the world's largest providers of lifting equipment for the global construction industry," did about $2.3 billion in business in 2014, with nearly 60% of that coming from outside U.S. borders. The to-be-spun-off foodservice business is about 70% that size, with $1.6 billion in annual revenue worldwide.

Last week's Form 10 filing with the SEC aimed to provide additional information on the latter. The details
Stretching 283 pages in length, Manitowoc's Form 10 filing confirms that the spinoff of the foodservice business will be "tax-free" to shareholders, and is scheduled to take place "in the first quarter of 2016." At least at first, the company will retain the Manitowoc name -- "Manitowoc Foodservice" -- and its stock will trade on the NYSE as ticker "MFS."

The exact date has not yet been determined, however. Nor has the number of MFS shares in the spun-off company that Manitowoc's current shareholders will receive per MTW share they already own been settled upon.

Curiously, this raises another question. According to data contained in the Form 10, Manitowoc Foodservice, as a division of Manitowoc proper, currently boasts $16.5 million cash on its balance sheet, and owes no long-term debt. But Manitowoc warns that "Manitowoc Foodservice anticipates having approximately $[●] million of indebtedness upon completion of the Spin-Off."

That big, place-holding dot in the Form 10 should probably actually be a big, bold-faced [?]. Because with it, Manitowoc opened the question of just how much of the parent company's $1.63 billion debt they intend to load onto the subsidiary before pushing it overboard....

What else we know
Another big question is how well a spun-off Manitowoc Foodservice will be able to service its debt. Because elsewhere in the Form 10 filing, we find a description of Manitowoc Foodservice's declining fortunes. We see, for example, that in fiscal year 2014, the soon-to-be-spinoff reported:

We also see that in the first half of 2015 to date, Manitowoc Foodservice has booked:

We also see that between H1 2014 and H1 2015, sales declined 5% and operating profits plummeted 29%. Sales declined in all three geographic regions in which Manitowoc Foodservice does business. This suggests that Manitowoc may be having trouble competing with rivals such as Middleby, which grew its revenues last quarter. On the other hand, the company seems to be outperforming Illinois Tool Works. At Illinois Tool Works, sales and profits fell even more steeply than at Manitowoc Foodservice.

The upshot for investors
A spun-off Manitowoc Foodservice will be a business trying to pull out of a slump, potentially burdened by debt, and competing with at least one well-funded, growing rival (Middleby). All of this suggests investors should think carefully about holding on to their shares after the spinoff -- and even more carefully before deciding whether to buy more.

Granted, at the right price, even a business in slow decline could be a bargain. Before making that decision, though, we'll need to know what price Mr. Market decides to charge for Manitowoc Foodservice shares. That crucial bit of information we'll find out... early next year.