Please ensure Javascript is enabled for purposes of website accessibility
Log In Help Join The Motley Fool
Free Article Join Over 1 Million Premium Members And Get More In-Depth Stock Guidance and Research
By George Budwell - Sep 10, 2015 at 7:03AM

What: Shares of Nektar Therapeutics (NKTR -5.04%), a small-cap biopharma that develops drug candidates using its PEGylation and polymer conjugate technology for diseases such as cancer, pain, and immunology, fell by double digits in August. 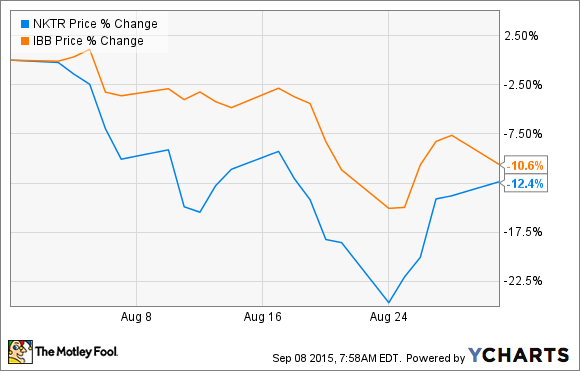 While the drugmaker's shares did slide almost in unison with the biotech industry in general, its second-quarter earnings report, released in early August, certainly didn't help matters.

In a month where investors fled cash flow negative biotechs far and wide, Nektar was unfortunate to report that its net loss in the second quarter of 2015 grew by 61% to $52.7 million, compared to a year ago.

So what: Although Nektar recognized $90 million in milestone payments from its collaboration with AstraZeneca from the commercial launch of opioid-induced constipation medicine Movantik in the first half of 2015, the company's operating expenses also rose markedly to $131.9 million during the same period, stemming mainly from the start of a late-stage study for its experimental chronic lower-back pain dubbed "NKTR-181" and the continuation of a late-stage study for NKTR-102 in breast cancer.

Nektar's rising R&D expenses were therefore one of the main culprits behind the company’s wider net loss during the second quarter, relative to a year ago.

Now what: If Nektar hopes to defy this moody market going forward, it's going to need to become a cash flow positive operation on a consistent basis. The good news is that Movantik, and the experimental hemophilia A therapy, Adynovate, being co-developed by Nektar and Baxalta, are believed to have enough juice to turn Nektar into a profitable business within the next two to three years. So investors will probably want to pay special attention to Adynovate's ongoing regulatory review and potential commercial launch, which the companies are targeting in the 4th quarter of 2015.

Editor's note: This article has been edited to remove an incorrect comparison of Nektar's quarterly net loss to consensus estimates.