Perhaps free charging is more than an early-adopter benefit, but also a permanent facet of Tesla's business model.

One of the questions ahead of electric-car maker Tesla Motors' (TSLA -6.42%) Model X launch was whether the new vehicle would include free charging. Would the company keep free charging for life as an exclusive benefit to early Model S adopters? Some have argued that there's an opportunity for Tesla to make additional money by selling energy to future customers. Indeed, Tesla used to charge Model S owners $2,000 up front to get access to Supercharging for life; therefore, the idea of selling energy to customers wouldn't be entirely new.

Model X Supercharging
However, Tesla investors and potential Model X customers finally have their answer. When the company began taking orders for its Signature Series Model X earlier this month, it said in the configurator for the vehicle that access to the Supercharger network would be standard on Model X. Assuming Tesla sticks to the information provided to the small group of customers currently configuring their Signature Series Model X, long distance travel on Tesla's robust Supercharger network, therefore, will be free for Model X customers -- just like it is for Model S customers.

Tesla's Supercharger network is a key selling point for Tesla's fully electric vehicles. By placing these high-speed charging stations, which can charge a Tesla battery by about 80% in just 40 minutes, strategically along major routes, the company has essentially enabled travel to almost anywhere in the United States. Also, the coverage of Tesla's Supercharger network is just as robust in Europe and it's growing fast in China, Japan, and Australia. 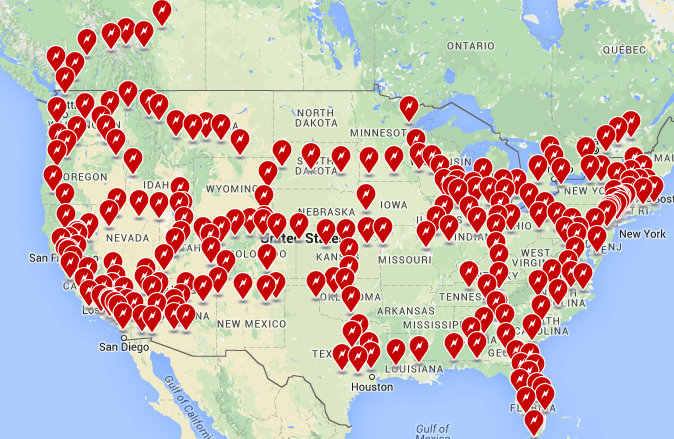 The growth of Tesla's Supercharger network has been downright mind-boggling. To get to its 508 Supercharger stations and 2,871 Superchargers today, the company increased its total Superchargers fivefold in 2014 and is now on pace to double the total number of chargers in 2015.

Cheaper than you think
An understanding of the costs involved in providing free charging to customers helps explain why Tesla is able to economically provide this perk to owners.

In the company's most recent 10-Q filing, Tesla said an initiative to double its total Superchargers in 2015 would represent just 5% of capital spending. The costs of paying for the electricity provided to Model S owners when charging at Superchargers? Filed under cost of goods sold on the income statement, "these costs were immaterial for all periods presented."

In other words, relative to the value provided to owners, the cost to Tesla for providing free charging is incomparable. Providing free charging to customers, therefore, was probably an easy decision for Tesla to make. Not only does it make the ownership experience better, but it serves a key role in demand generation by helping to validate the case for fully electric cars.

With Tesla likely to continue to offer free Supercharging with Model X, it's looking more likely than ever that this will be a permanent facet of its business model.

The first Model X deliveries begin September 29, though it will likely take at least three months for Tesla to ramp deliveries to meaningful levels.