What: Shares of Ultra Petroleum (OTC:UPL) surged more than 20% in the month of August. Almost all of that increase was related to an increase in oil prices during that time and broad gains across the energy sector. Here's the problem with that. Ultra Petroleum's production is more than 95% natural gas.

So what: It's price movements like this that make it awfully hard to believe that Wall Street knows what it is doing at any given moment. Sure, higher oil prices will likely lead to better prospects for oil and gas producers, but those producers need to actually produce oil to reap the benefits. If we look at Ultra's more important commodity -- nautral gas -- we see that prices declined last month. 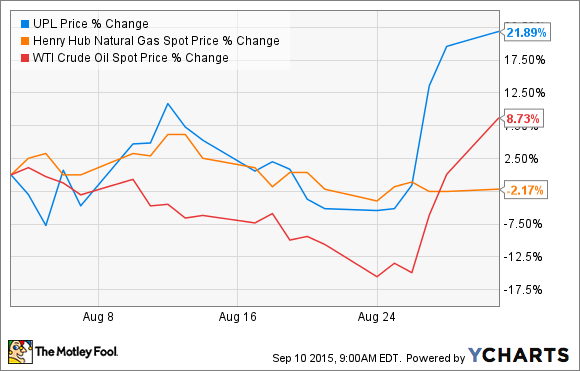 In fact, as noted on its most recent earnings report, Ultra has only brought one new oil well online in all of 2015 out of the 19 that is has drilled. The remaining wells that have not been completed will be held like this until it sees better oil prices. So any worries about oil making a large impact on the company's finances long term seem a bit overblown.

Now what: The real focus for shareholders in Ultra Petroleum should be its continued efforts to cut costs on its natural gas drilling and production. The company has good production coverage through its hedging portfolio for next quarter, but those hedges expire and roll off a lot in the fourth quarter. Once they do, Ultra will be much more exposed to the spot price of natural gas, which is around $2.70 per thousand cubic feet today. That's not the end of the world since the company's cash flow breakeven price is less than $2.00, but it will certainly eat into net income unless it can bring down costs or if gas prices were to rebound in the near future.