Please ensure Javascript is enabled for purposes of website accessibility
Log In Help Join The Motley Fool
Free Article Join Over 1 Million Premium Members And Get More In-Depth Stock Guidance and Research
By Jason Hall - Sep 10, 2015 at 11:46AM

11:40 a.m. EDT: XPO Logistics continues its recent spending spree, announcing it will buy Con-Way in a cash and debt deal.

What's happening: Shares of XPO Logistics (XPO 2.79%) are down nearly 13% in early trading today, after it announced that it would buy trucking company Con-Way (NYSE: CNW) for roughly $3 billion. Shares of Con-Way are up close to 34% today on the news, trading at around $47.44, a slight discount to the $47.60 per share that XPO Logistics has agreed to pay.

Why it's happening: While it's pretty obvious why Con-Way shares are up (they should trade closer to the deal price until it eventually closes), XPO Logistics' share price drop is a little more nuanced.

Trading volume is super-high today, so it's looking like a lot of shareholders (or a few large shareholders) don't really like the deal. The company will spend the vast majority of its $1.2 billion in cash on the acquisition, as well as adding to its $3.8 billion in long-term debt. It will also gain another roughly $286 million in net debt that Con-Way carries: 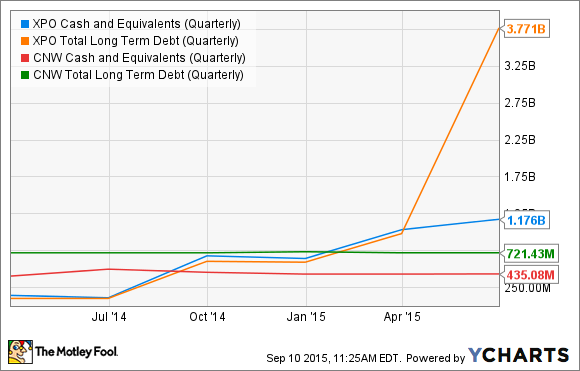 That's not to say this is a bad deal, but the market's immediate reaction isn't positive, a continuing trend so far in 2015 as XPO Logistics has been on an acquisition binge, having recently acquired a French shipping company for more than $3 billion.

The company's stock is down about 28% since January, so it's going to be up to management to prove Mr. Market wrong and show that these acquisitions are in the best interest of its own shareholders. And while the 34% premium for Con-Way's shares may seem expensive, it's actually slightly below that company's share price as recently as January, so XPO isn't necessarily overpaying: 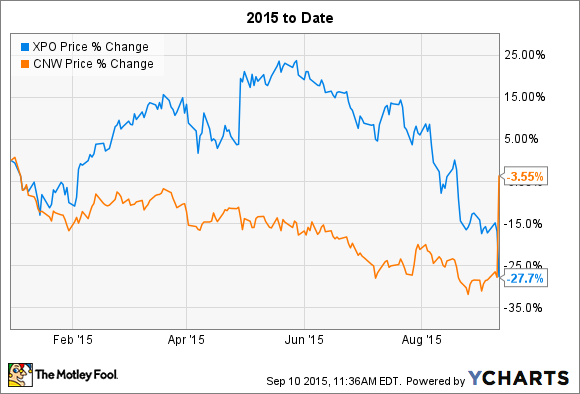 But will the acquisition pay off for XPO Logistics shareholders? It's going to take a few years before we know the answer to that question.