NantKwest's shares were hammered by a turbulent market in August. 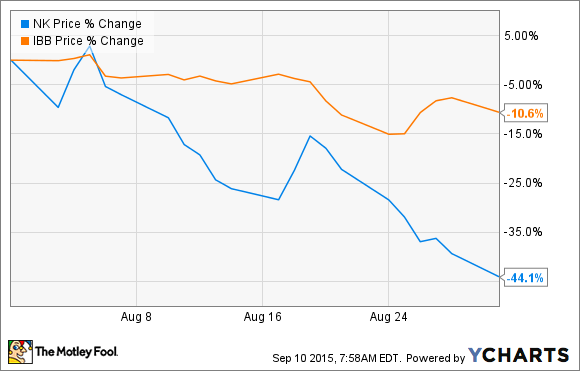 What: Shares of NantKwest (NK), a clinical-stage immunotherapy company focusing on the use of natural killer cells to treat cancer, plunged by 44% in August, according to data from S&P Capital IQ, making it one of the worst-performing biotechs/biopharmas during the month.

So what: NantKwest picked perhaps the worst time in recent memory to execute an initial public offering, at least from standpoint of an investor. Hoping to cash in on the healthcare IPO bonanza that has raised tons of cash for early clinical trial-stage companies of late, NantKwest went public in late July.

At first, demand for the company's shares was unusually strong, with the stock pushing past $38 a share -- up from the initial price of $25. Unfortunately, NantKwest's shares have since fallen by approximately 53% from those former highs, falling prey to the widespread August sell-off that hit clinical-stage biopharmas particularly hard.

Now what: NantKwest is gearing up to test its immunotherapy platform across a host of virally induced solid tumors and a handful of hematological malignancies at the mid-stage level. If the the company can get these trials enrolled in time, we'll most likely get an update on their status at next year's American Society of Clinical Oncology meeting. Until then, however, I'm satisfied to watch this biopharma from the sidelines, given how badly the market has treated these types of stocks lately.