What: Shares of Lumber Liquidators Holdings (LL 2.18%) stock fell 21.7% during the month of August according to S&P Capital I.Q. data.

So What: Lumber Liquidators unveiled a woeful second quarter 2015 earnings report on Aug. 5, a result attributed by management to both the allegations of harmful levels of chemical formaldehyde in its products sourced from China and its decision to suspend sales of these products.

Revenue declined by nearly 6%, comparable-store sales fell 10%, and gross margin tanked 15.1% to finish the quarter at only 25.1%.

The report precipitated a single day share-price drop of 27.7%, bringing August's swoon to nearly 38%. However, later in the month, a handful of analyst upgrades helped the stock recover somewhat, ending the month down roughly 22%.

Now What: Now that Lumber Liquidators has suspended sales of the controversial China-sourced flooring, aside from any litigation risks facing the stock, shareholders will be concerned in the coming quarters with the company's ability to stabilize sales at levels that approach its former profitability.

The 6% in decline in revenue was perhaps better than anticipated given the stream of negative publicity the company has weathered since earlier this year when the integrity of its Chinese flooring was first challenged. Fixing margins may prove the more difficult task.

It's apparent that the suspended flooring was highly profitable for Lumber Liquidators as gross margin has plummeted in its absence. With its earnings release, the company disclosed some one-time adjustments to gross margin during the quarter, for clarification purposes.

These adjustments were primarily related to loss accruals for its Chinese inventory and the introduction of indoor air quality testing kits, which are available for no charge to customers who have concerns over the possible presence of formaldehyde in their flooring. The total of the adjustments equals roughly 600 basis points, or 6 percentage points out of the total gross margin decline.

Even allowing for these one-time effects, the fall-off in gross margin still sits at just under 10%. In a business that is predicated on supplying lower-cost bargain products, this is a significant span of margin that will be challenging for management to rebuild. If the company can revamp product lines successfully, however, the potential reward of taking a position in the stock soon is worth considering: 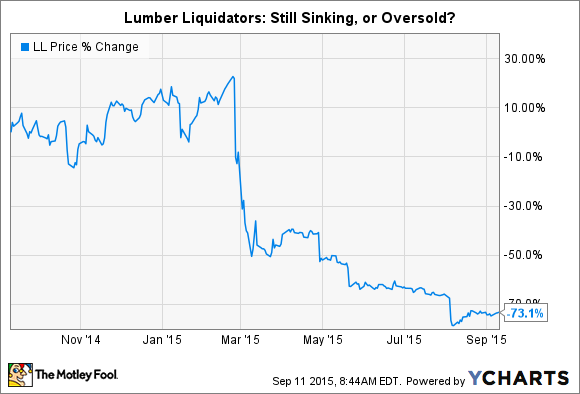 All in all, investors on the sidelines may want to wait at least another quarter to gauge how the company responds to its margin woes with promotions and changes to product mix, given a much-reduced inventory stream from China.