What: Shares of entertainment giant Time Warner (TWX) tumbled 19% in August, according to data from S&P Capital IQ, due to a broad-based sell-off in media stocks. 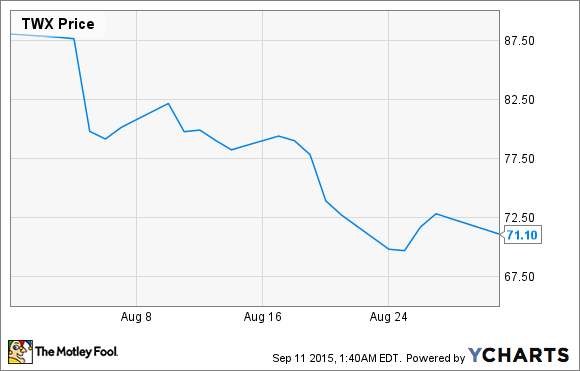 So what: Time Warner actually reported a strong quarter during an otherwise rough period for rivals including Walt Disney Co, Viacom, and 21st Century Fox. In the media conglomerate's second quarter, revenue increased 8%, while adjusted operating income jumped 15% and adjusted EPS was up 28% to $1.25. Perhaps most importantly, Time Warner's cable properties performed well in the quarter as operating income from its Turner networks increased 20% and HBO continued to grow and improve on its competitive position, though operating income fell, primarily due to costs associated with the launch of HBO Now.

It seems reports from rival media companies that were seeing falling ad revenue and subscriber counts weighed on the stock. The House of Mouse, in particular, was hit hard by its revelation that ESPN had seen its subscription base decline.

Now what: Of all the media stocks, Time Warner may be in the best position. Its Warner Bros. unit brings in syndication revenue from shows like Seinfeld and the Big Bang Theory, and HBO seems to have a promising future ahead of it as the value of its quality content continues to grow. HBO and its sister network Cinemas won 131 Emmy nominations, and the company set records for viewership with the fifth season of Game of Thrones. Turner Networks, meanwhile, continues to thrive, benefiting from the licensing of original content to Hulu and lower programming costs.

With all of those strengths, Time Warner is trading at a P/E of just 16, and only 12 based on 2016's projected earnings. That compares to a forward P/E of 18 for Disney and a forward P/E of 11 for Fox, which is already seeing revenue fall. With Time Warner's shares trading near 52-week lows, now could be a great time to jump in at a bargain price.

Jeremy Bowman has no position in any stocks mentioned. The Motley Fool owns and recommends DIS. We Fools may not all hold the same opinions, but we all believe that considering a diverse range of insights makes us better investors. The Motley Fool has a disclosure policy.

Can Showtime Survive as a Stand-Alone Product?
413%