During Apple's (NASDAQ:AAPL) product launch event, the company announced that its next-generation iPad -- known as the iPad Pro -- would feature an incredibly beefy A9X processor. This chip, according to Apple, offers better CPU performance than 80% of the notebook PCs sold over the last year and better graphics performance than 90% of them.

The iPad Pro, unsurprisingly, is being positioned as a productivity device, and Apple made sure to bring up representatives from a number of key productivity software names -- such as Microsoft (NASDAQ:MSFT) and Adobe Systems -- to show off the capabilities of this new device.

Interestingly enough, I think that this presentation made it pretty clear that Apple is now in direct competition with PC processor giant, Intel (NASDAQ:INTC).

When the iPad -- as well as the slew of other tablets that followed in its wake -- arrived, it wasn't too long before the device began to negatively impact PC sales, much to the chagrin of Intel.

In response, Intel, working in tandem with its PC system builder partners, tried to make notebooks more "tablet-like" in a bid to stop (and potentially even reverse) the cannibalization of PCs and tablets.

Although the degree to which Intel has succeeded here is debatable, Intel's Kirk Skaugen showed the following slide at a recent investor conference: 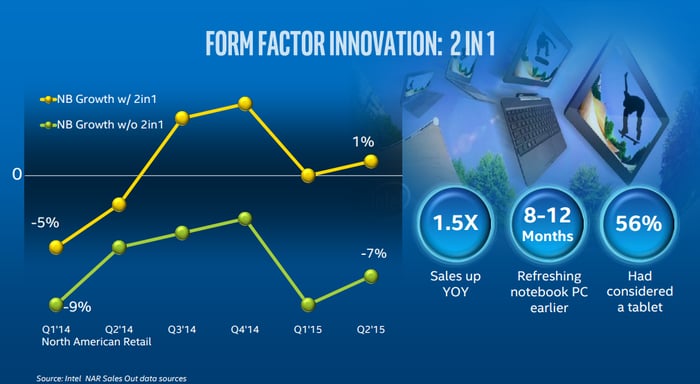 The key things to notice here are that 2-in-1 systems seem to be outpacing the overall notebook market significantly and that 56% of buyers of such systems had considered buying a "pure" tablet (such as an iPad) instead.

Given that without Intel's large push to make notebooks more attractive, those buyers might have potentially opted for tablets (probably premium tablets, which likely means iPad), which may have contributed to the weak iPad results Apple has seen in recent quarters.

The iPad Pro is Apple's way of trying to eat into competing 2-in-1 sales
With the iPad Pro, I believe that Apple is trying to entice buyers to forgo Intel-powered, Windows-based 2-in-1 devices from other hardware vendors (such as the Surface, MIIX 700, and so on) and instead hand their money over to Apple.

It would seem that this is why Apple is making the comparisons of the iPad Pro's performance to regular notebook PCs is precisely because the iPad Pro is in direct competition not with other tablets but with 2-in-1 Windows-powered PCs.

What does this mean for Apple and Intel?
From what I can tell, the Apple iPad Pro is an extremely compelling product with a lot of very interesting features and seemingly a lot of performance. For users who don't absolutely need Windows, this looks like it will be the "productivity tablet" to beat.

If I had to call it now, I'd say that Apple will succeed in regaining share against 2-in-1 devices. Its pricing is about in line with such devices, and the feature set and performance are first rate. I also think that Apple will do a good job of enticing software developers to develop and optimize their productivity-oriented applications for the iPad Pro.

The extent to which Apple can regain share relative to 2-in-1 Windows systems, though, is still very much unknown.

On the flip side, I would say that if the iPad Pro winds up being a smash hit, it could begin to stunt the growth that Intel is seeing in 2-in-1 devices based on its silicon. That would obviously be a negative for the company's declining PC business, especially since 2-in-1 devices appear to be doing quite well for Intel and the PC vendors.