Turnaround Sierra Wireless has seen its stock price cut by roughly half. Does that make it a buying opportunity?

Previously, I discussed the somewhat promising turnaround efforts at Sierra Wireless (NASDAQ: SWIR) since the company made its full transition into a pure play Internet of Things company. Strong top line growth and opportunities to strengthen profit margins point in the right direction. For this article, I will dive into the valuation to determine whether a successful turnaround is already priced into the stock.

Beware Wall Street's lemmings
The stock is trading at less than half of its 52-week high. It might seem like a screaming buy, but just because Wall Street analysts fall into that trap doesn't mean you should follow the lemmings off the cliff. 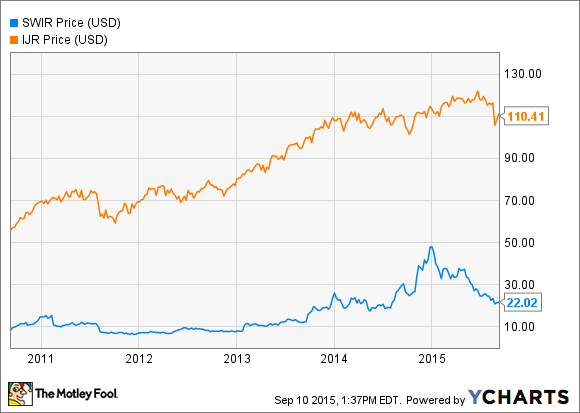 SWIR and IJR data by YCharts

Why is the stock off that much? A quick look at the performance of the iShares Core S&P Small-Cap ETF shows it's not the market. Some digging around unearths some explanations.

Investors seem to have a love-hate relationship with surprises. They hate disappointing surprises and have been known to harshly punish stocks that deliver them. As for the love part of the relationship, well, we have all seen the fleeting bull runs from a single outperforming quarter.

In theory, at the right price, any stock might be worth owning, so let's do some heavier lifting with the valuation.

The PEG ratio
In his book Beating the Street, Peter Lynch suggests an approach similar to the price/earnings-growth, or PEG ratio. This metric divides a stock's price-to-earnings ratio by its earnings growth rate. Lynch will also add a stock's dividend yield to the growth rate.

For example, a stock with a dividend yield of 1% and earnings growth of 9% would have a denominator of 10. Trading at 20 times earnings, the resulting PEG ratio would be 2.0. So what's an attractive PEG ratio? Lower numbers are better. According to Lynch, 1.0 is okay, 0.75 is good, and 0.5 is great. Above 1.0 is less desirable, though it's worth noting that many stocks are currently trading in that lofty territory.

Wow, did I mention 1.0 is only okay, and lower numbers are better? Though Lynch advises using the company's historical earnings growth rate, not its projected one as he considers historical performance a much more accurate predictor of future growth than Wall Street forecasts, we are best off considering both approaches here due to the company's unique turnaround position. Sierra Wireless is counting on an emerging technology trend, and its future prospects with the Internet of Things will differ from its previous strategy. Taking the analyst consensus forecast of nearly 90% growth over the next five years, the company's PEG comes down to a much more impressive 0.25.

How to evaluate an unprofitable company
Methods for valuing a stock with negative earnings can also include price-to-sales or price-to-cash flow from operations ratios. Evaluating Sierra Wireless with the alternative valuation methods, the stock trades at 1.2 times sales. While that's down from recent highs, the following chart shows it's still near the top of the range it was trading in before hype about the Internet of Things set in. 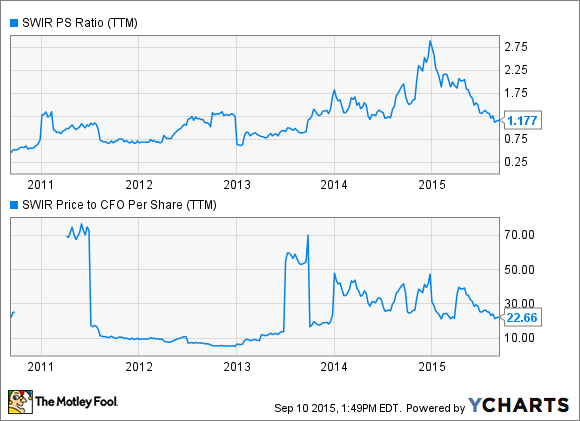 At 23 times cash flow, this lies closer to the middle of its range over the past five years. That's a little more encouraging, but let's not forget that operating cash flows have been deteriorating lately, even as revenue growth was impressive. .

Foolish summary
Sierra Wireless shares took a big hit, as its earnings outlook disappointed investors. Sometimes that's a buying opportunity but not always. The adjusted price-to-earnings and PEG ratios are mixed; price-to-sales is middling at best, and the price-to-cash flow ratio is somewhat more encouraging -- if we believe operating cash flows can change course and grow with the top line.

In our next and final article in this series, we will look at the big picture and make a final investment decision for Sierra Wireless.