Mr. Market sends shares lower after the company reports good news. Could this be a buying opportunity?

What: Shares Halozyme Therapeutics (HALO 1.10%), a developer of human enzymes, got caught up in the market's chaos during August as the company shed more than 24% of its value during the month, according to S&P Capital IQ. 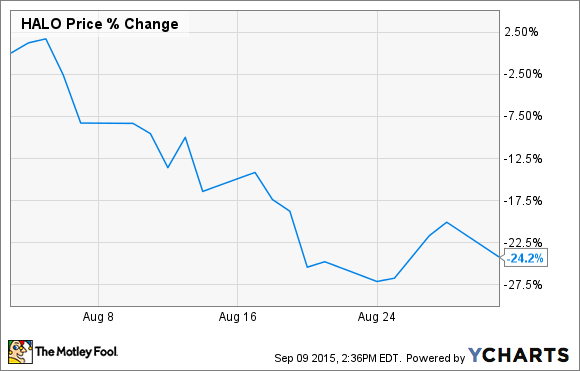 So what: There doesn't appear to be any particular news that caused the market to shy away from the stock, so I think it's fair to blame the weakness on general macroeconomic issues that caused investors to flee the markets in general last month.

In fact, the company released a great earnings report last month that investors cheered. Revenue swelled to $43.4 million during the quarter, which was up huge from the $18.3 million recorded in the year-ago period. This strong revenue generated a $3 million profit during the quarter, though it should be noted that those results were largely driven by a one-time payment from a lucrative licensing agreement it signed with AbbVie.

Beyond the reported results, Halozyme continues to make progress on a phase 3 trial for its flagship drug, PEGPH20, which it is studying to treat pancreatic cancer.

Now what: For the full year, the company expects to report revenue of $110 million to $115 million and burn a total of $20 million to $30 million of its cash. Despite that, it should end the year with around $110 million in the bank, which gives it plenty of room to meet its financial commitments. The company also sets itself apart from many other small-cap biotechs in that it already has products on the market that are generating revenue, and it boasts a nice list of partnerships that should give investors some confidence in its future.

Halozyme is an intriguing company, and this recent share-price weakness makes me think it could make a great addition to the more speculative portion of my portfolio.

3 Small-Cap Stocks to Buy in September