Here at the Fool, I write about Spirit Airlines (SAVE -1.67%) quite often, and I've been a shareholder in the company since earlier this year. So naturally, I've read quite a bit of what travelers have to say about Spirit. Usually it's not good.

Last week -- with some trepidation -- I tried Spirit Airlines for the first time. Despite my hesitation, I found that the trip went fairly smoothly. (And of course, I got a great fare.) While the airline certainly isn't for everybody, it can be a good option if saving money is important to you and (1) you're not extremely tall, (2) you're willing to read the fine print; and (3) you have a relatively flexible schedule.

The booking process
I chose to fly Spirit Airlines mainly because I was traveling back from the Atlantic City area to Chicago and Spirit is the only major airline operating at Atlantic City International Airport. (It's an anomaly in the carrier's route network -- Spirit mainly serves big cities.) Rather than traveling almost an hour further to get to Philadelphia or Newark and also paying a higher fare, I decided to fly Spirit. Spirit is all about low fares, and that's what the author got. Source: Author's screenshot.

Low base fares are a hallmark of Spirit Airlines, and that was certainly the case here. My fare was advertised at just $63.09 one-way.

Spirit Airlines doesn't include much beyond a guaranteed spot on the plane with its base fare. The booking process was fairly cumbersome, as Spirit offered me lots of "optional services," including a reserved seat, a carry-on bag, and checked bags, plus other ancillary products such as hotels and rental cars.

I was planning to travel with a suitcase and a garment bag, plus my backpack. While I would normally carry the garment bag onto the plane, that would have cost $35. Instead, I decided to fold up the garment bag and place it inside my large checked bag, which wasn't nearly full. That way, I had to pay only $30 for one checked bag, bringing my total to $93.09.

At the airport
I checked in for my flight about 24 hours in advance, but since I was on vacation and didn't have printer access, I couldn't print my boarding pass. I expected to pay an extra $2 for printing it at the airport kiosk, but I wasn't charged: a pleasant surprise. (Perhaps I fooled the system by checking in online, even though I hadn't printed my boarding pass.)

During the online check-in process, I was urged to reserve a seat -- it would be more expensive to do so at the airport. This was the most deceptive part of my experience with Spirit Airlines. Fortunately, I knew that I could just choose to not reserve a seat and have Spirit assign me one for free. Not surprisingly, it was a middle seat near the back of the plane.

The biggest hiccup of my Spirit Airlines experience came right after I reached the airport. At the check-in kiosk, I noticed that Spirit charges an overweight fee for checked bags weighing more than 40 pounds. That came as a surprise, because nearly every other airline has a 50-pound. weight limit. (This is why it's so important to read the fine print with Spirit.)

I was pretty sure my suitcase was overweight, so I moved a few heavy items to my backpack. It worked. When I got to the bag check counter, my suitcase weighed in at 39.5 pounds. My backpack probably ended up being bigger than the 16-by-14-by-12-inch limit for a free personal item. However, I gambled that as long as it was on my back and not egregiously large, the gate agents wouldn't check. I was right -- and I had no problem fitting the backpack under the seat in front of me. 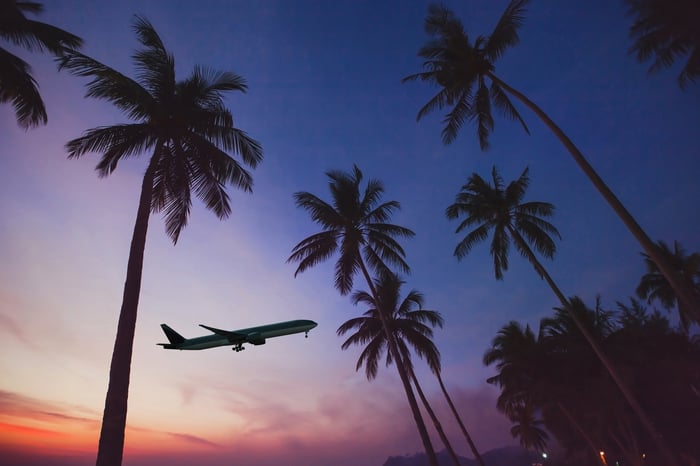 I got onto my plane despite probably having an oversized personal item. Image source: Getty Images.

My boarding pass said that the flight would begin boarding 45 minutes before departure. That was an exaggeration: The boarding process began less than 30 minutes before the scheduled departure time. However, everybody was on board and ready to go on time.

The flight
Spirit Airlines is known for having the least legroom of any airline in the U.S., with just 28 inches of "pitch" for each row. (That's about 3 inches less than a typical economy seat.) Luckily, I'm only 5'6", so my knees weren't touching the seat in front of me. However, it seemed anyone over 5'10" or so would have felt cramped. If you're very tall, consider paying up for a "Big Front Seat" -- or flying another airline.

A lot of reviewers have complained that Spirit Airlines' flight attendants aren't friendly. I didn't find that to be the case. Everyone I interacted with at the airline -- at the check-in counter, at the gate, and on the plane -- had a smile and a good attitude.

The flight itself was fairly smooth, and we landed in Chicago almost half an hour early. The one drawback was that we had to sit on the tarmac for 15 minutes until our gate opened up. Even so, we got to the gate about 10 minutes early.

The checked bags were unloaded very quickly, which was a nice surprise. By the time I got to the baggage carousel after a quick bathroom break, the first suitcases were coming out. As a result, I had my bag and was ready to go less than 10 minutes after my flight's scheduled arrival.

Sometimes, Spirit Airlines just works
I've heard plenty of Spirit Airlines horror stories, and I'm sure most of them are true. To offer rock-bottom fares, the company makes choices that can cause problems when something goes wrong, such as bad weather or a pilot who calls in sick.

For example, while my flight arrived quite early, only 66% of Spirit Airlines flights have arrived within 14 minutes of the scheduled time year to date. That's significantly worse than the industry average of 78%.

Still, my experience shows that Spirit Airlines can offer a perfectly good travel experience when there isn't a major disruption. You do have to read the fine print and be willing to play the game of minimizing the extras you pay for. For taller travelers, there's also a significant comfort trade-off. And you have to be patient and flexible, because you might get hit with a long delay. But overall, Spirit Airlines can count me as a satisfied customer.