Qualcomm's chip business is under pressure due to "changing industry dynamics" at Apple and Samsung.

This year has been rough on mobile chip giant Qualcomm (QCOM 4.32%). Shares have been severely underperforming the broader market, down 27% while the broader S&P 500 has fallen by just 5% year to date. The key challenges have mostly been within the company's important chip business, which comprise the majority of sales. That's not to say that the licensing business hasn't had its own fair share of headwinds, which include Qualcomm's suspicions that many Chinese OEMs are underreporting their smartphone unit shipments to skirt paying royalties.

Within the chip business, Apple (AAPL 2.54%) and Samsung are the two most prominent customers, and Qualcomm has made note of "changing industry dynamics" that are weighing on its QCT chip segment. These headwinds are expected to continue into next fiscal year, so there may not be any relief on the horizon.

Samsung is making revenue fall
More specifically, Samsung has been aggressively shifting to its own in-house Exynos processors in its flagship Galaxy devices. This isn't necessarily news to Qualcomm investors, as it was the primary pain point when the company reported earnings in January, which was in the midst of the Galaxy S6 production ramp as the device was launched in April. Samsung followed up by using Exynos chips in the subsequent Galaxy S6 Edge and Edge+. Expectedly, this has translated into noticeable sequential dips in QCT revenue this year. 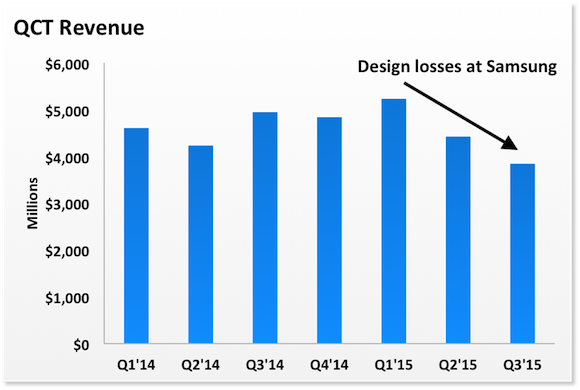 That's not to say that Qualcomm has lost Samsung for good. Quite the contrary, Qualcomm is working hard to win the spot back in the forthcoming Galaxy S7 in 2016. The next model has a code name of "Project Lucky" and some benchmarks for two different variants have already been spotted -- one of which includes Qualcomm's Snapdragon 820.

It's too early to know if Samsung has decided to use the Snapdragon 820 in the Galaxy S7, as these tests could just be preliminary prototypes as Samsung evaluates its choices of chipsets. If true, this could be a reversion back to the way it's always been, where Samsung uses either Exynos or Snapdragons in different variants depending on various market factors.

Apple is making margins fall
Qualcomm has also noted that Apple continues to gain share in the high-end smartphone market, thanks largely to overwhelming popularity of the iPhone 6 and 6 Plus (to say nothing of the upcoming iPhone 6s and 6s Plus). But Qualcomm only supplies the cellular baseband modem chipset to the iPhone, which is less profitable than fully integrated Snapdragon processors.

It's also possible that Intel is competing aggressively for the spot, which could translate into pricing concessions. Either way, with Qualcomm's QCT product mix incrementally shifting away from Snapdragons toward modem chipsets, Qualcomm is seeing some major earnings before tax, or EBT, margin dilution. 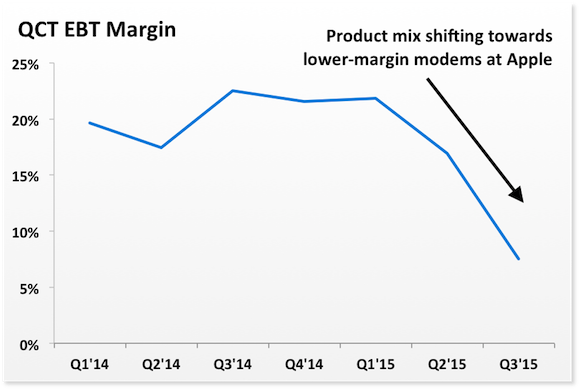 Making matters worse, Qualcomm is also losing significant operating leverage as revenue declines. Thanks to operating leverage, most companies enjoy healthy margin expansion as sales increase, but the opposite can be quite painful. For instance, QCT revenue fell 22% last quarter, but QCT EBT plunged by a painful 74%.

As far as Qualcomm's Apple business goes, there is little upside. Simply put, Apple will never use Snapdragons in the iPhone since the Mac maker's proprietary A-chip designs are advancing at a breathtaking pace. If anything, Apple will either switch to Intel if Intel can offer competitive performance and pricing with modems, and Apple is likely working on its own modems in-house, too.