Newmont Mining Corporation (NYSE: NEM) is one of the world's largest gold miners. But that's been a rough business to be in since around 2011, when most commodity prices started to fall. Interestingly, between 2010 and 2014, Newmont's debt level increased around 50%. Is it carrying too much of a balance sheet burden?

Some great assets
Newmont has some great assets, with an average cost of pulling gold from the ground at around $900 an ounce. That's toward the low end of the industry and means its mines can still make money even in today's low-gold-price environment. So there are things to like about the miner. 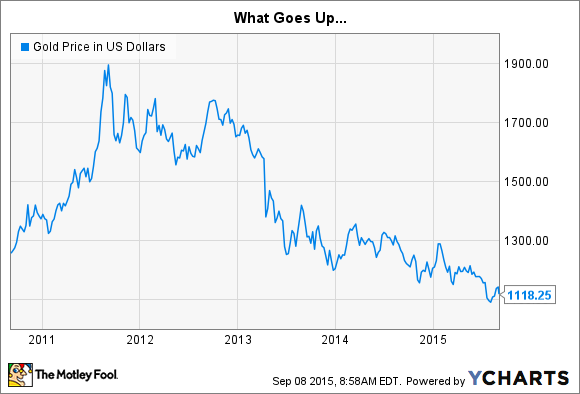 But with gold on the outs, Newmont can do little but suffer through the low prices it's getting for the ounces it sells. Making matters worse on the downside, Newmont doesn't hedge its commodity exposure, which means it feels the full brunt of falling prices. (It will feel the full benefit on the upside, too, but the market isn't there just yet.)

This is a tough time
So Newmont, which made around $4.50 a share in 2010, made only $1 or so last year. And with only about $0.50 a share in earnings in the first half of 2015, it looks like it won't earn much more than that this year -- which makes it a little worrisome that the miner's long-term debt load increased from $4.4 billion at the start of the decade to $6.6 billion at the start of 2015. At the end of the second quarter, that number stood at around $6.4 billion.

Long-term debt, which makes up the vast majority of that number, sits at around 35% of the capital structure. That's really not too bad and roughly in-line with mining giants like BHP Billiton and Rio Tinto. But it's up around 10 percentage points since the start of the decade and Newmont is fully exposed to volatile commodity prices, so it's still reasonable to ask how much of a problem debt could become.

In a good position
To start off, Newmont is retrenching like all other miners, cutting costs and curtailing development activities. This effort has included selling nearly $2 billion worth of non-core assets. So it's working hard to keep lean and mean in the downturn. It's also been pushing debt maturities out, so it doesn't have to worry about paying off material amounts of debt for a few years. Newmont's even managed to reduce its debt load a little since the start of the year.

So things are going in the right direction at this point on the debt front. And it's been able to achieve all this while still investing in core assets. Such growth spending is a big part of why debt has been moving higher in recent years, though some of its growth efforts have proved ill timed in hindsight. It's just that gold prices have continued to flounder, so the company has been getting a little more serious about its financial strength of late. This is very similar to other major miners, all of which clearly hoped the downturn would have shifted into an upturn by now.

That said, it helps to put some numbers to things. For example, in the first half, interest expense came in at $167 million. That's roughly 6% of operating income -- a pretty manageable number. Net income, meanwhile, made up only around 8.5% of operating income. The company's operating margins are single-digits thin these days but were as high as 40% at the start of the decade. In other words, it's a good choice for Newmont to get more serious about debt issues, even if it's just a preventive measure.

In the end, debt isn't likely to push Newmont Mining into the abyss. However, that doesn't mean the company can sit back and relax -- in a downturn, debt rightly becomes more worrisome. But at this point, Newmont is doing the right things to ensure that its debt load doesn't become a bigger issue than it needs to be.