While most airline stocks have struggled in 2015, JetBlue Airways (JBLU -3.91%) and Volaris (VLRS -1.48%) have soared. In fact, both stocks reached new multi-year highs by the end of last week. 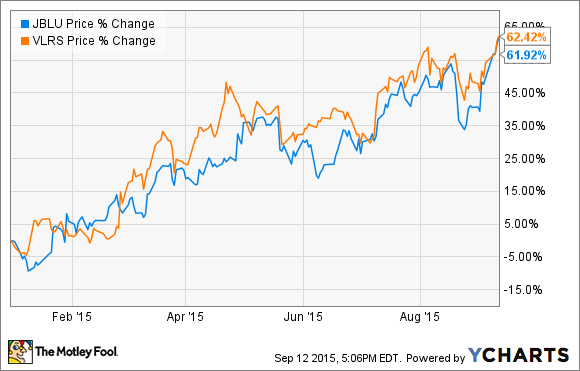 Both stocks' stellar performances can be traced at least in part to strong unit revenue growth, which (combined with the falling cost of fuel) has led to rapid margin expansion. That margin expansion is likely to continue due to each airline's profit improvement initiatives. As a result, shares of JetBlue and Volaris could continue marching higher.

Unit revenue outperformance drives margin growth at JetBlue
Nearly every U.S. airline has had to contend with falling unit revenue this year, due to the impact of rising capacity and low oil prices. However, that hasn't been the case for JetBlue. Through the first six months of 2015, JetBlue's passenger unit revenue rose 2.9% year over year.

Since JetBlue's windfall from low oil prices hasn't been offset by falling unit revenue (as has been the case at most of its peers) its operating margin expanded by more than 10 percentage points in the first half of 2015. Operating income nearly tripled to $535 million from $182 million in the year-ago period.

Last Friday, JetBlue projected that passenger unit revenue will be roughly flat in Q3. That may be worse than what some investors expected. That said, the company is likely to start recording gains in ancillary revenue per passenger as it has started charging passengers for their first checked bag unless they buy a (more expensive) fare that includes checked baggage.

Furthermore, unit revenue growth may strengthen again in Q4 and 2016 as more passengers become subject to JetBlue's bag fees and as JetBlue expands its Mint premium transcontinental service. These and other strategic initiatives should drive hundreds of millions of dollars of incremental profit over the next few years.

Despite JetBlue's great profit growth potential -- and the stock's big gains this year -- JetBlue shares still trade for less than 14 times the company's projected 2015 earnings per share. That's a discount to the market, meaning that JetBlue stock is still fairly cheap. It's still not too late to profit from JetBlue's dramatic comeback.

To some extent, the gains at Volaris are simply a reflection of the company's recovery from a period of overcapacity in the Mexican air travel market that peaked in early 2014. However, the company is also aggressively reducing its cost structure to drive further margin growth.

For example, Volaris added five seats to each of its A320 aircraft during the first half of 2015, increasing each plane's seating capacity by nearly 3% at a negligible marginal cost. Volaris also received its first two A321s -- 220-seat planes that are cheaper to operate on a per-seat basis -- a few months ago.

Volaris plans to add five more A321s to its fleet in 2016, driving unit costs down further. Four of those five orders have been placed this year, indicating management's confidence in the company's recovery.

Volaris is phasing out smaller jets like this A319 in favor of larger, more cost-efficient planes.

Volaris does face one significant headwind worth noting: the strong dollar. The Mexican peso has fallen by about 25% against the dollar in the past year. This effectively makes dollar-denominated expenses like jet fuel and aircraft rent more expensive.

However, oil prices have fallen so far that Volaris is still saving a lot of money on fuel. Volaris has also increased its aircraft utilization this summer, helping to offset that cost inflation driver. Finally, 30% of Volaris' revenue is dollar-denominated, which is a natural hedge against currency fluctuations. Volaris is focusing most of its growth on the U.S. market, which will increase that natural hedge.

Like JetBlue, Volaris stock is trading at about 14 times the average analyst estimate for 2015 EPS -- and earnings estimates have risen steadily in recent months. That's quite low considering that Volaris is a genuine growth stock: It plans to grow at a double-digit rate for the foreseeable future, while reducing its cost structure by adding new, more fuel-efficient aircraft.

There may be some bumps along the way due to the immaturity of the Mexican aviation market, but Volaris stock looks quite cheap considering its strong earnings trajectory and the extent of its growth opportunity.