Please ensure Javascript is enabled for purposes of website accessibility
Log In Help Join The Motley Fool
Free Article Join Over 1 Million Premium Members And Get More In-Depth Stock Guidance and Research
By Adam Galas - Sep 15, 2015 at 10:05AM

Find out three simple reasons dividend investors should remain calm and snap up one of America's best high-yield energy stocks right away.

Listening to the financial media over the last week or so, one might be forgiven for thinking that an economic catastrophe was upon us. That goes doubly so for oil stocks, as crude has now fallen to the lowest levels since the financial crisis.

In fact, the financial sky is not falling, and America's shale oil industry is not doomed to perish at the hands of OPEC's latest price war. That's why I faced last weeks market panic not with terror but with excitement. I saw many quality energy dividend stocks plunging out of irrational sentiment, their yields soaring to mouthwatering levels.

One of those stocks was Enterprise Products Partners (EPD 2.02%), America's second largest pipeline operator, and perhaps its most venerable dividend growth blue chip. I'd like to tell you three simple reasons I think you should turn off CNBC, stop checking daily oil prices, and consider buying Enterprise right now.

The yield is too darn high! 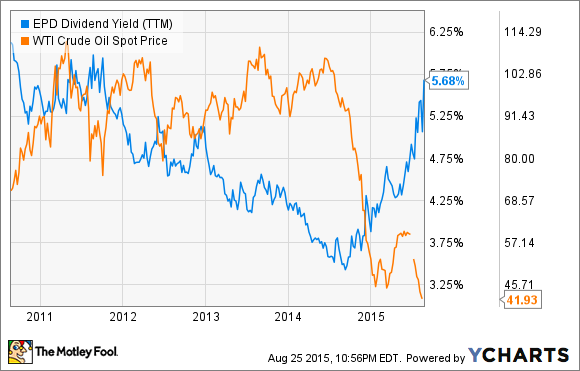 Right now, thanks to a fortunate confluence of an oil crash and a long overdue market correction, Enterprise's distribution yield is at the highest it's been in almost four years.

Even better, Enterprise has proved itself to be one of the most consistent payout growers in its industry, having recently announced its 44th consecutive distribution increase -- a 5.6% increase over Q2 of 2014.

That means Enterprise was able to not just sustain its distribution during the financial crisis -- when economic conditions and oil prices were far worse than they are today or likely will become -- but to also reward investors with continued income growth. That's a trend I expect to continue for many more years, for two main reasons.

The distribution is protected by a superior business model
Enterprise is able to generate such consistent distribution growth because 85% of its service contracts are based on a fixed operating margin. That means that even when revenue falls, such as during an oil crash, its distributable cash flows or DCF -- from which distributions are paid -- remains relatively flat and predictable.

In addition, Enterprise is one of the few midstream MLPs without a general partner, meaning it doesn't have to pay incentive distribution rights fees or IDRs that can divert as much as 50% of marginal distributable cash flow away from regular investors. That spare cash helps give Enterprise one of the most secure payouts in its industry, a distribution coverage ratio of 1.3, and an average coverage ratio greater than 1.4 over the past quarter and five-year period, respectively.

In fact, just in the past six months Enterprise generated an excess $532 million in distributable cash flow. That means Enterprise is likely to keep paying -- and growing -- its distribution over the next few years even if oil prices fall further or stay low. It also means that Enterprise can keep its cost of capital lower by not having to tap the equity markets as often -- a major competitive advantage over some of its general partner dictated peers. 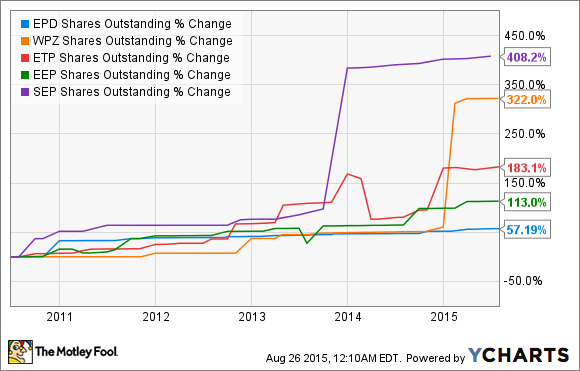 Enterprise can fund more of its growth internally while other midstream MLPs -- those with general partners -- have to resort to selling additional units more often to raise growth capital because of their IDR fees, and smaller ability to retain DCF.

The distribution will probably continue growing
Speaking of growth, Enterprise has a ton of it coming up. In fact, $8.3 billion worth of projects are currently under construction, of which $2.4 billion are scheduled to come online just in the second half of 2015.

During the first half of the year, Enterprise put only $300 million worth of organic investment into service. Yet in an environment of plunging oil prices, it was still able to grow its DCF and payout. Thus, I think it's possible investors will see stronger distribution growth in the quarters to come, even if oil fails to recover.

Bottom line: Smart investing means keeping your head when others are losing theirs
While nothing in life is certain, I feel pretty confident saying the end of the world probably isn't nigh. Therefore, long-term investors should take advantage of the combination of a market correction and the oil crash to snap up shares of Enterprise Products Partners while they are offering such a generous yield.

I know that keeping a cool head during times like these is hard to do. However, the facts of Enterprise's strong business model -- built on a solid foundation of fixed-fee, long-term contracted cash flows -- and rock solid distribution coverage should make it easier to sleep at night. Best of all, you can bolster your confidence secure in the knowledge that Enterprise is likely to keep growing its payout in the years to come, maximizing not just your income, but also your chances of generating market-beating total returns.