Please ensure Javascript is enabled for purposes of website accessibility
Log In Help Join The Motley Fool
Free Article Join Over 1 Million Premium Members And Get More In-Depth Stock Guidance and Research
By Andrew Tonner - Sep 15, 2015 at 7:24AM

With demand for Apple's tablets struggling to regain momentum, two recent moves from Apple still are unlikely to improve iPad sales in the immediate future.

Forgive me for my cynicism, but haven't we been here before?

Last July, tech giants Apple (AAPL 3.19%) and International Business Machines (IBM 0.53%) unveiled a partnership that both companies hoped would help revive struggling sections of their respective companies. However, in the nearly 14 months that have transpired since then, the Apple-IBM partnership remains largely noteworthy for its historic significance alone. 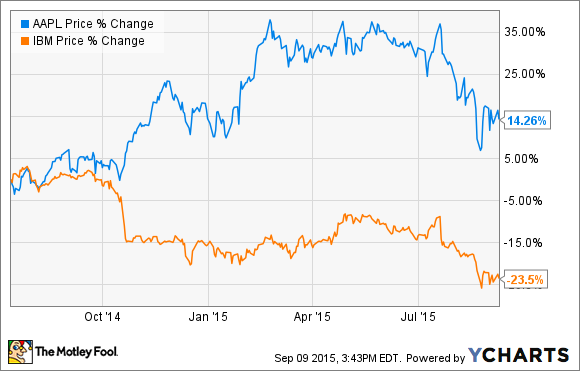 IBM stock has cratered by nearly one-quarter, and Apple's stock has fallen nearly 15% in recent months amid concerns that economic turmoil in China, Apple's key growth engine, might derail the year of the iPhone 6 supercycle.

Apple recently announced two more major initiatives it clearly hopes will hasten its push into the enterprise -- a recent deal with Cisco Systems (CSCO 2.63%) and its larger iPad Pro. However, in reviewing Apple's Cisco deal and iPad Pro launch, it seems neither will provide a magic bullet to help reverse Apple's sagging iPad business.

The first involves optimizing a series of key enterprise IT networking functions for Apple's iOS devices on Cisco's enterprise networks. Additionally, it appears Apple and Cisco will also collaborate to create a coordinated technology to sync work landline phones with incoming calls to iOS devices at the workplace, essentially porting workers' desktop phones onto their mobile devices.

Overall, the press release provides scant concrete details about the exact degree to which this new arrangement might financially benefit either Apple or Cisco. Rather, we're left with a general sense that, as two of the largest names in tech today, their collaboration could help drive more business for the other. This alone gave me pause, but then Apple more recently unveiled its new enterprise-focused tablet, the iPad Pro.

Speaking as the owner of a Surface Pro 3, I can personally attest to the device's impressive suite of capabilities. However, the sales data, and my own anecdotal experience, suggest only limited commercial opportunities exist for these larger enterprise-focused tablets. Parsing the financial data, Microsoft disclosed Surface revenue grew 117%, to a total of $888 million, in its most recent quarterly report.

Lacking average selling price, or ASP, we can only approximate Microsoft's Surface unit shipments, which likely hover somewhere near 1 million units for the quarter. To be sure, the iPad's broad appeal means it will likely sell better than the Surface. However, the point that Microsoft's best business-oriented tablet still remains a bit player within the larger tablet market signals a limited opportunity also exists for Apple at the larger end of the tablet market.

No clear solution in sight
At a superficial level, it's easy to see how each of these moves might help drive incremental sales, especially for Apple's shrinking iPad unit. However, real-world evidence suggests that neither effort is likely to drive a significant improvement in Apple's struggling tablet sales.

Although their specifics differ, last year's Apple-IBM pact serves as a reasonable proxy for thinking about Apple's deal with Cisco. Apple refuses to publicly disclose iPad sales split between consumer and enterprise segments.

And although the two sales verticals certainly differ, the IBM deal alone appears to have had little affect on Apple's tablet business, barring an unlikely and significant decline in consumer tablet sales. In the five quarterly reports since Apple and IBM announced their partnerships, iPad sales have steadily contracted at an average rate of -19% year over year. 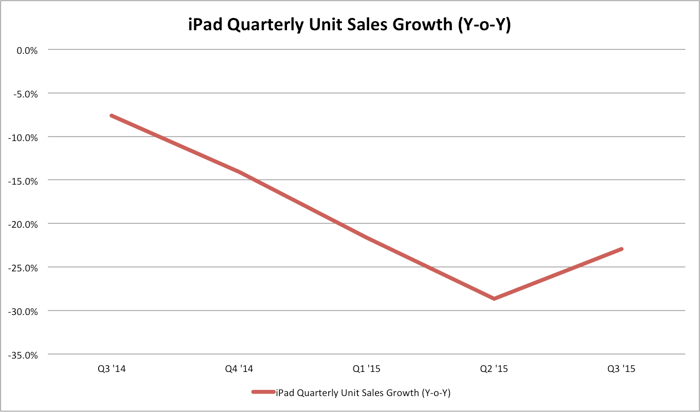 It's worth noting here that Apple hopes to drive smartphone and tablet sales into the enterprise by partnering with IBM and Cisco, so looking at tablet sales alone isn't an entirely fair assessment of the deal's success. However, as a device often discussed as especially suited for the workplace, this data doesn't give reason for much optimism that the Cisco deal will help revive Apple's iPad business either.

Between the likely lack of impact from past enterprise deals, and the tepid demand we've seen for larger-screened tablets like Microsoft's Surface, I wouldn't grow overly excited that these recent news events will revive Apple's struggling tablet business any time soon.