Ways in which investors can get over the hurdle of adding to winners or starting positions in companies they feel they have "missed out" on.

The fear of buying overpriced stocks at high valuations is something that can scare off many investors from either starting a position in a company or adding to an existing holding. For me personally, Starbucks (SBUX 0.91%) was one of those companies. I wish I could say I bought shares at the 1992 IPO price but, it took me 22 more years. Yet even in that short time -- just since last September -- my position has appreciated by more than 50%.

Sometimes as investors we hesitate to add to a position on a stock that has enjoyed a successful run. There never seems to be a "good" time to buy, and doing so would pull up our cost-basis. This mind-set often prevents us from increasing our benefit from substantial gains over time. So how can we overcome the mental roadblocks that prevent us from adding to or starting positions in "winner" companies?

Although I'll be using Starbucks as an example, this is a framework you can apply to any "winning" company you've been eyeing.

The company's position next to its peers
In the case of Starbucks, there is the $0.99 coffee you can get down the street and then there is a cup of Starbucks coffee. Semi-close competitors such as Dunkin Donuts (DNKN) and other similar brands have not reached the level of popularity this company has. The internationally recognized brand is an intangible asset with immense value that competitors lack.

Starbucks customers spend an average of $5 per visit and often visit a location multiple times per day.  The almost cult-like following Starbucks has doesn't seem to mind paying more for their favorite drinks. For instance, fiscal 2014 was a record year, thanks in part to price increases. Global comparable-store sales grew 6%, driven by a 3% increase in the number of transactions and a 3% increase in the average ticket. Fast-forward to the most recent quarter , comparable-store sales continued rising in all markets, with a 7% rise globally. Instead of slowing demand from price increases, customers have kept buying, without hesitation and in larger numbers.

Can the company you are looking at do the same? Understanding competition and the level of pricing power Starbucks has, as well as its levels of sustainability, were factors I took into account when starting a position.

Getting over the valuation hurdle
With its forward P/E of 30.8, Starbucks could scare off investors as being too rich. The price reflects market optimism and a rosy growth outlook. From new store concepts in the works meant to boost after-hours traffic, including 'Starbucks Evenings', to plans for further expansion to approximately 30,000 locations (currently at around 22,000) there is more to come for this valuable brand.

When it comes to valuation, keep in mind the type of company you are analyzing. Take a second to determine whether the numbers are telling the whole story. What kinds of 'intangible' factors are those numbers missing? You may find that the company is expensive and is better to wait. You may also find that the opposite is true and you may have found a 'bargain' from a long-term point of view.

The value of holding on
Examine how the company you are considering has survived significant challenges. Starbucks was suffering from overexpansion in 2008, and the stock price suffered, falling more than 70% to a low of less than $4 per share in March 2009. The company eventually got back on track, and now it's back as an industry leader. Now the stock is reaching record highs. After a 2:1 split in March, the stock is trading at around $57 per share.

This 10-year chart should be a good lesson in why it sometimes pays to hold on to an ebbing stock and continue adding to our position over time, specifically when the core qualities of the business remain intact. Times of turmoil, either company-specific or in the broader market, can present good buying opportunities and give us a chance to start or add to positions of strong companies still experiencing a good amount of growth. 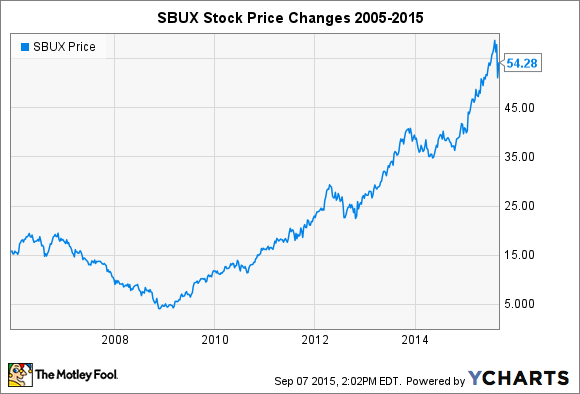 SBUX data by YCharts: Starbucks also had a 2:1 split in October 2005. The prices noted are all post-split.

The Foolish bottom line
Don't let the fact that a company has had a 'good run' deter you from adding it to your portfolio or to an existing position. Had I given in to my fears that the stock was too expensive last year, I would have missed out on that 50% run.

As with any other investment in your portfolio, it is important to keep an eye on performance. For businesses with brick and mortar (retail) operations, which is the case of Starbucks, I'd keep a close eye on the expansion plans to make sure the company stays on track. I'd also keep an eye on comparable-store sales numbers year over year as the company continues to grow.

Determine which factors are important for the company on your radar, and decide whether you'd like to continue adding to your position over time. Remember that great companies that have gone on a run are still great companies to invest in. As part of your research, consider the future prospects and whether you can picture this company still being around 5, 10,15 years from now. This can help in your decision and ease any fears you may have.