Despite the ambient uncertainty regarding whether or not we will see the Federal Reserve hike rates on Thursday for the first time in a decade, equity traders are sending stocks higher on Tuesday. The Dow Jones Industrial Average (^DJI -0.38%) and the benchmark S&P 500 index (^GSPC -1.03%) were up 1.66% and 1.54%, respectively, at 3:15 p.m. EDT.

Yale professor and Nobel Laureate in Economics Robert Shiller, who correctly identified the bubble in stock prices during the late '90s technology boom and the credit boom, has warned that the U.S. stock market may once more be in the grips of a bubble, leaving investors vulnerable to another bear market.

In a widely circulated interview with the Financial Times published on Sunday, Shiller pointed to above-normal valuations combined with historically low investor confidence regarding those valuations as a combustible duo.

Shiller is best known for the cyclically adjusted price-to-earnings ratio (the "CAPE," or Shiller P/E), which uses 10-year average inflation-adjusted earnings instead of a single year's earnings-per-share. At 24.7, the CAPE on the S&P 500 is nearly 50% above its long-term historical average.

However, Shiller also constructs sentiment indexes, including a Valuation Confidence Index that tracks whether institutional and individual investors believe the market is overvalued, undervalued, or fairly valued. The current combination of that index and the CAPE is reminiscent of a disturbing historical precedent:

That index is at lower levels than it has been since the peak of the market in 2000. ... This is why I think -- I call it the "millennium boom" -- was a bubble, because people increasingly, as the 1990s went on, had lower and lower confidence in the valuation of the market, but they were still buying and bidding up prices. That's the sign of a bubble. So it looks to me a bit like a bubble again, with essentially a tripling of stock prices since 2009 in just six years and, at the same time, people losing confidence in the valuation of the market. 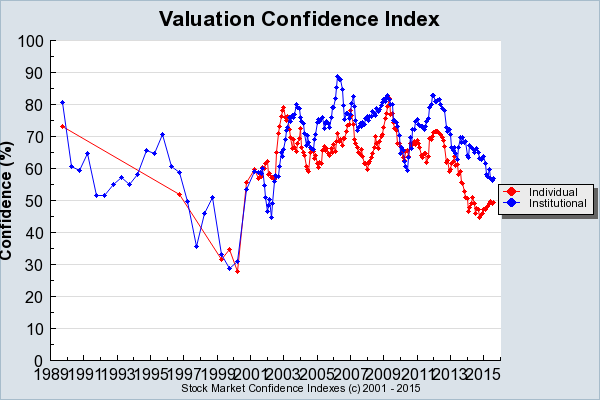 Shiller was careful to stress that none of his indexes are suitable for predicting the market's short-term performance:

"The problem is the short-run thing of saying when will [the market] turn. I don't have -- [nor] does anyone have -- a good way of saying that."

Nevertheless, he thinks the recent correction could be the start of something more severe:

"Now the thing is, when we see a correction and also an increase volatility and an increase in the VIX Volatility Index: That shows that people are thinking something -- worried thoughts. And it suggests to me that many people are reevaluating their exposure to the stock market and we could see aftershocks of the correction. But not maybe right away, maybe in six months or a year."

The trouble with using the CAPE is that, despite having a pretty good track record in terms of predicting 10-year stock returns, it appears to exhibit a conservative bias.

Indeed, in March 2010, as the current bull market was about to celebrate its first birthday, Shiller told the Wall Street Journal that stocks already looked expensive and that he wondered "about a return to another break in the market." Five-and-a-half years on, the S&P 500 is up over 70% even after its recent wobble.

Back then, Shiller himself said that the CAPE had only spent seven months below its historical average since 1991!

Prior to last month's correction, most fair-minded observers would have agreed that U.S. stocks were overvalued. I think they remain overvalued today, but not to the degree the Shiller P/E would suggest.

I've previously referred in this column to finance blogger Jesse Livermore. He's made the only meaningful improvement that I know of to Shiller's valuation measure, by adjusting earnings-per-share growth to account for a secular change in the dividend payout ratio, dubbing the resulting series the Total Return EPS Index.

Toward the end of August, I asked Livermore for his fair value estimate for the S&P 500. His answer: 1700, roughly 13% below where it is today. He estimates the index will produce a 10-year total return averaging 6% per annum, or 4% in real terms.

Bull and bear fights were popular in 19th-century California. In this contest, even if a bear market doesn't show its snout anytime soon, a bull market that is now long in the tooth may struggle to maintain its championship form.