Please ensure Javascript is enabled for purposes of website accessibility
Log In Help Join The Motley Fool
Free Article Join Over 1 Million Premium Members And Get More In-Depth Stock Guidance and Research
By Matthew DiLallo - Sep 16, 2015 at 11:11AM

How Boardwalk Pipeline Partners, LP compares to the perfect MLP.

Boardwalk Pipeline Partners, LP (BWP) was recently added to the Alerian MLP Index, which is the leading gauge of Master Limited Partnerships. However, what this means is that the company is now one of the largest MLPs by size, though not necessarily that it's one of the best MLP investment options. To determine that, I've come up with a list of the five characteristics found in the perfect MLP that we'll use to judge Boardwalk's worthiness of investor's attention.

Boardwalk largely fits this criteria as about 90% of its revenue is backed by firm, long-term contracts as we see in the following slide. 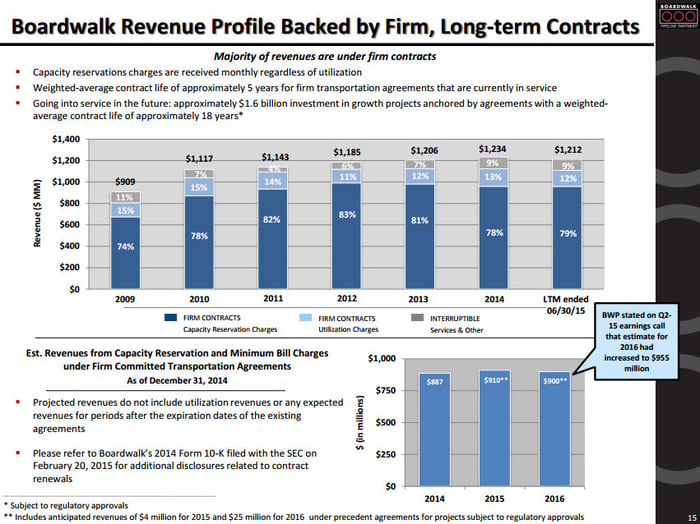 As that slide notes, the company has steadily grown its revenue by adding additional fee-based assets into its portfolio. Further, it has another $1.6 billion in fee-based growth projects coming into service that are anchored by long-term contracts.

This is one area where Boardwalk is currently a little weak. While the company has an investment grade credit rating, its leverage ratio is elevated. Its current goal is to keep its debt-to-EBITDA ratio below 5.5 times during the construction of the aforementioned $1.6 billion in assets so that it can maintain said investment grade credit rating. However, its target after those assets are in service is to maintain a Debt-to-EBITDA ratio in the low 4's.

It is also worth noting here that Boardwalk's general partner as well as 51% of its units are owned by Loews (L 0.84%). That's a real key because Loews has a strong financial position as the company has a solid investment grade credit rating as well as over $5.1 billion in cash and investments. That gives Loews the financial strength to come in and assist Boardwalk if it needed financial assistance, or, as it has done in the past, provide it with funding to drive growth.

4. An MLP should have a history of distribution growth
That being said, one of the reasons the coverage ratio is so strong is because the company slashed its distribution last year due to elevated debt levels and a weak coverage ratio. 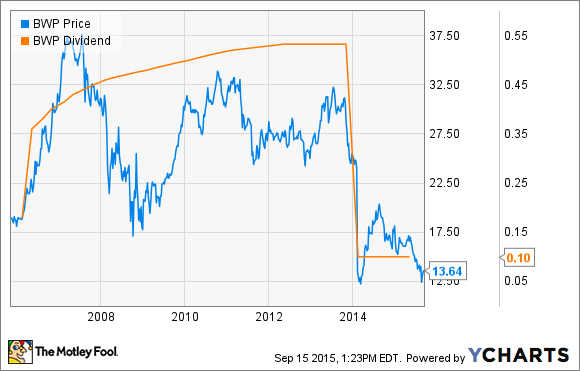 The company cut the payout substantially in order to generate excess cash flow that it could use to reduce its leverage and fund growth projects. Because of that, this is one area where Boardwalk clearly fails to meet the gold standard.

5. An MLP should have a visible project backlog
As mentioned previously, Boardwalk currently has a visible project backlog totaling $1.6 billion. That's a fairly large backlog for a $7 billion company. Further, not only are these projects supported by contracts that have a weighted average length of 18 years, but they are driven by end-users such as petchem and power plants instead of driven by supply growth from producers. That's key in a market where supply growth will be tough as commodity prices remain weak.

Investor takeaway
While Boardwalk Pipeline Partners isn't perfect, its good characteristics do outweigh its bad. That said, investors still might want to look elsewhere as its debt levels are elevated and the company's distribution will be stuck in neutral until it finishes construction on its current backlog.

Why a Supportive Parent Company Is Key to Success