Gilead's recent debt offering sparked speculation that the biotech is closing in on a buyout target. This expert thinks Baxalta and Incyte may be on the biotech's radar. Here's why.

Gilead Sciences (GILD -0.70%) raised a few eyebrows recently by issuing roughly $10 billion in new debt through a senior note offering. Perhaps most interestingly, the biotech didn't provide much color on the reason(s) for the new debt, beyond that it will be used for "general corporate purposes."

Of course, this debt offering caused the Street's buyout rumor mill to kick into overdrive. Many investors have been hoping the biotech would use its mountain of cash, cash equivalents, and marketable securities -- totaling $14.7 billion at the end of the second quarter -- to pursue a major acquisition.

The logic goes that Gilead needs to make a big splash on the M&A scene to shore up its future earnings, given the likely entrance of additional competitors into the hepatitis C market. While no single experimental therapy looks like it can immediately displace Gilead's Sovaldi or Harvoni from the top of the hep-C mountain right now, payers may use any newly approved drugs to push for further price discounts, eroding the company's profitability in this key market.

When it comes to potential acquisition targets, though, Wall Street appears to be doing little beyond blindly throwing darts at a dart board.

While nothing in the wacky world of biopharma is impossible, I find these names to be way off base. Although Bristol would be a great match for Gilead from an oncology pipeline perspective, Gilead would have to lever up in a huge way to take on Bristol's $100 billion market cap -- and never mind the premium it would have to offer to entice the drugmaker in the first place. I don't see Gilead offering $120 to $130 billion for Bristol.

When it comes to Vertex, I fail to see how this match makes sense. Vertex is primarily a rare-disease specialist with approved cystic-fibrosis medicines such as Kalydeco, and it has only a minor footprint in the oncology space, with a handful of experimental candidates. Gilead, by contrast, has shown little interest in the orphan-drug space, and it's clearly targeting oncology as its next major area of expertise.

Put simply, I think investors can probably cross Bristol and Vertex off this list.

So who might be on Gilead's wish list?
Now that we've ruled out two of the most commonly floated names, I think we can apply a bit of simple logic to help us arrive at a more likely target. First off, let's assume that the $10 billion in new debt is slated for an acquisition -- and yes, that's a big assumption.

If so, that likely sets the minimum total acquisition price at around $10 billion. Considering Gilead's cash position before this debt offering, I think the upper bound for an acquisition is likely around $35 billion in any deal that would be mostly cash. Again, Gilead could certainly increase this amount by using a mix of shares and cash, but that doesn't fit Gilead's lengthy history of paying all cash in its deals.

Now we have a minimum and a maximum to sort our buyout candidates. If we throw factor in Gilead's growing interest in oncology, I believe there are only two companies that fit our criteria: Baxalta (NYSE: BXLT) and Incyte Corp. (INCY -0.44%).

Baxalta's core areas of expertise are hematology, immunology, and, most importantly, oncology. Without even considering the value proposition of Baxalta's robust hematology and immunology assets, the company may be worth a steep price to a biotech like Gilead because its oncology pipeline is so impressive: 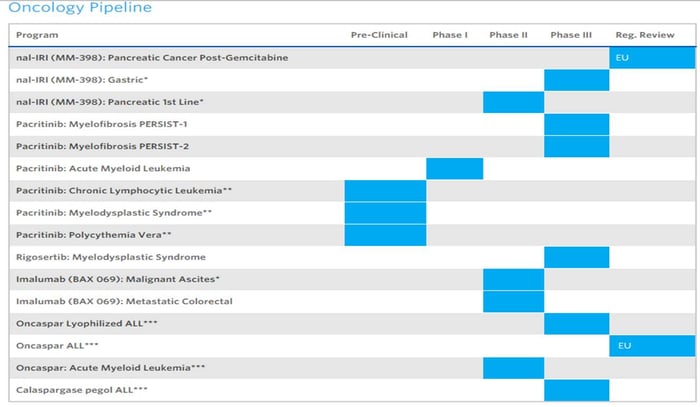 All told, Baxalta believes the commercial opportunity for its oncology pipeline stands at around $16.6 billion by 2020. While Baxalta's experimental products certainly won't capture their entire target markets, this lofty figure does help to show that Baxalta's oncology pipeline could be a major value-driver for the company going forward. So, with a market cap of $24.2 billion at present, Baxalta may be on Gilead's M&A radar, given that it offers an appealing mix of price and deep value, especially in oncology.

Based on the same train of thought, Incyte also has to be considered as a name to watch. Incyte already has the blood cancer drug Jakafi approved for two different indications (myelofibrosis and polycythemia vera) and is on track to generate around $560 million to $575 million in revenue this year, according to the company. Incyte even thinks Jakafi can eventually top $1 billion in sales without any further approvals.

What really makes Incyte a compelling target for Gilead in my view, though, is its internal and external oncology assets that span a wide diversity of indications, as well as approaches:

Tying it all together
Gilead's fundraising efforts may be a prelude to a major acquisition. Then again, the biotech may simply choose to put this money to work by increasing its share-buyback efforts and instead rely on its own robust clinical pipeline to create value moving forward. No one really knows.

Having said that, I think the rumors linking Gilead to Bristol and Vertex are largely unfounded. A deeper look at the biotech's past acquisitions and its emerging cancer pipeline suggests that Baxalta and Incyte are probably better options both from a "fit" and a price standpoint. Stay tuned.