Investors are punishing Ambarella for not blowing them away, but the growth story is still intact.

Ambarella is best-known as a GoPro supplier, but there's more to the story. Source: Ambarella.

Ambarella (AMBA -1.69%) investors are hard to please. The company released earnings results that blew away estimates and showed tremendous growth, but next quarter's guidance was just under expectations and investors started to bail. However, Ambarella's growth story doesn't appear to be over, and its competitive position still looks strong.

As Foolish followers of Ambarella may have already read, the company put up huge revenue growth figures of nearly 80% for the quarter on a year-over-year basis, along with adjusted net income up 150%. Both of these figures handily beat expectations, but as the market is always forward-looking, the focus was on next quarter's revenue guidance, which slightly missed expectations.

To show how fickle the market can be, analyst expectations for quarterly revenue of $92.3 million was still within management's guidance of $90 million to $93 million, but the midpoint of this range ($91.5 million) was lower than average expectations and one likely reason for the drop in the stock.

Is growth slowing?
Management was quick to point out that the lower revenue guidance was due to expected year-over-year declines in the wearable-camera segment and the timing of product launches from GoPro Inc. and Xiaomi. In the past, new wearable cameras had product launches in the third quarter, right before the holidays, but both GoPro and Xiaomi launched products earlier than normal in the second quarter. This situation boosted second-quarter revenue and effectively pulled forward those sales.

In fact, management specifically noted that average sales for the second and expected third quarter were in line with growth expectations. In other words, if this is true, then there isn't a slowdown in wearables going on -- rather, it is just a timing issue.

Of course, management will always talk its book and try to smooth over any disappointments. But at this stage it's only one data point, so investors should at least get some more information before running for the exits.

If you give a moose a muffin ...
The problem with high-growth, high-flying stocks such as Ambarella is if they always beat earnings and revenue expectations then the market will begin to expect it and be quick to jump on anything not perfect in the earnings release. For example, look at how Ambarella has consistently beaten revenue expectations over the life of the stock: 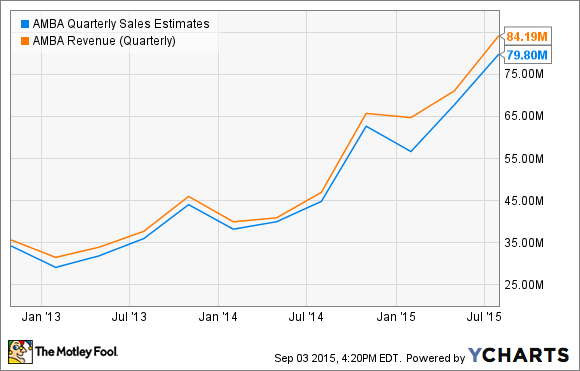 The question investors have to ask is whether the main growth story and thesis for the stock remains intact. Has there been a change in the business model or competitive environment?

The competitive environment question is especially important for Ambarella, and this is where reading or listening to the conference call can be helpful, as well as following the industry. Ambarella's management didn't see the competitive landscape changing since last quarter. While some of the big chipmakers are trying to make inroads, they can't adapt their current products and have the same image quality, compression, and low power as Ambarella. They would need to build a video-specific solution like Ambarella's to effectively compete.

Further, the growth story for wearables isn't just about the next quarter, but a multi-year trend. The wearable-camera market is expected to increase shipments by a compound annual growth rate of 33% through the year 2020, according to a recent report from Research and Markets. In addition, Ambarella is expanding into other applications such as flying cameras (think drones), security cameras, and automotive cameras.

Flying cameras are now 10% of Ambarella's revenue, confirming growth which is expected to continue next quarter. Flying cameras also carry higher margins, as management cited a higher drone mix as one of the reasons for the uptick in gross margins. The drone market is still relatively new; but because of their incredible potential for commercial use, market researchers are estimating the compound annual growth rate for the market to be anywhere from 34% to over 100%! It will certainly be exciting to see this new market develop over the next few years.

IP security cameras for retail and home use could be an additional growth driver, with the introduction of Nest's home monitoring cam, which uses Ambarella's chip. Management also noted that in China, Internet service providers are offering home monitoring as part of their packages. We could see something comparable in the U.S. as Comcast Corporation is expected to launch similar services for Christmas. This market could have some real legs as the IP-based video surveillance market is expected to grow at an annual compound rate of 24% through the year 2019.

The hazards of high-growth investing
The large drop in Ambarella stock over the past week is a disappointment and a setback. But it's just a part of growth-stock investing. It's normal, and it's even relatively healthy, as investors need to keep expectations and valuations in check.

Even with the recent drop, the stock is still up more than 80% over the past year, compared with only single digits for the Nasdaq. That may be cold comfort for those who recently bought Ambarella, but Foolish readers know we take the long view on stocks, including high-growth companies.

Ambarella is a company taking advantage of a large growth trend in wearable cameras, security cameras, and now drones. Investors should continue to keep an eye on the competitive environment, but the long growth runway for Ambarella doesn't appear to have changed at this point.

Chris Kuiper has no position in any stocks mentioned. The Motley Fool owns and recommends Ambarella and GoPro. We Fools may not all hold the same opinions, but we all believe that considering a diverse range of insights makes us better investors. The Motley Fool has a disclosure policy.