An exercise that may open new insights when you're considering a prospective stock purchase. 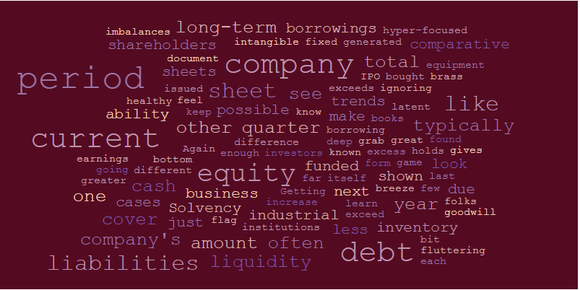 Recently, I wrote about an investing insight that I gained early in my professional career -- that is, to look at a company's resources and obligations as expressed on the balance sheet before proceeding to read the profit and loss statement (P&L). I believe this exercise improves your ability to understand a company's long-term prospects and perhaps make a better-informed investing decision along the way.

If you're interested in trying this out for yourself, the following are four big-picture, "starter" questions an investor can pose when reading through a balance sheet, along with detailed explanations and additional items to consider.

1. How deep is liquidity?
In scanning a company's balance sheet, the first thing you'll see is the "current assets" section, which includes items like cash, receivables, inventory, and investments. Compare current assets to the first subgroup you'll find in the liabilities section: "current liabilities."

These two subgroups in relation to each other form the concept of "working capital," which is expressed as current assets minus current liabilities. From this simple equation, you get a sense of how well a company's monetary resources cover obligations due within one year or less.

Working capital is synonymous with liquidity. Can cash and other "quick" assets like receivables and inventory defray the accounts payable, short-term debt, and other liabilities coming due? Corporations that keep their current assets at least equal to and up to roughly double their current liabilities are thought to be fairly liquid.

In the rare cases when working capital isn't a positive number, you should seek to understand why. You should also question a current assets total that is many magnitudes greater than the sum of current obligations. Too much of cash on the balance sheet could be evidence of poor resource allocation by management. Liquid assets with no immediate purpose should be invested in longer-term, higher-yielding instruments or better yet plowed back into the business.

When encountering a company's financials for the first time, I'm always curious to know: What does long-term debt look like? Is it less or greater than total assets (ignoring goodwill and other intangible assets)? Does it exceed the amount of shareholders' equity shown at the bottom of the balance sheet?

Solvency is different than liquidity, in that it speaks to a company's ability to pay its long-term debts. Typically, a healthy company will keep total tangible assets, and equity where possible, in excess of long-term debt. Debt in and of itself is not a bad thing, and if enough profits and cash are being generated by the prudent use of borrowing, it's OK if that debt exceeds equity or total assets.

You should be aware that some industries by nature are more highly leveraged than others. An airline, which has to make enormous fleet investments, will typically have higher borrowings than, say, an online travel company, which enjoys quite lower capital requirements.

Nonetheless, borrowings that far outstrip the rest of the balance sheet are often a tomato-hued flag, fluttering in the breeze for your attention. Again, finding the "why" behind great imbalances is the logical next step. Tip: The required "Management's Discussion and Analysis" section in a corporation's quarterly report often yields a quick answer.

3. Does the company's capitalization make sense versus its game plan?
For a static document, the balance sheet holds its own bit of magic, as it tells you how a company has been capitalized, or funded.

The books of a recent IPO will typically show an ample cash balance. Such a company is newly capitalized with equity: the issued stock that institutions and folks like you and me have bought.

An industrial manufacturer (or as we discussed above, an airline) might have an unholy amount of fixed assets on its books, and very often you'll find these assets funded by debt.

Getting a feel for how a company is capitalized gives you a litmus test to determine if management's business strategy is viable. If that industrial manufacturer's borrowings are overextended to the extreme but company brass wants to ramp up production and inventory rapidly next year to grab new customers in Asia, be skeptical.

In another example, if executives of, say, a retail clothing company decide to expand revenue via acquisitions, yet you see that cash resources are slim, and leverage is high, raise your antennae: the company may be preparing to issue additional shares on the public markets.

The strategy may pay off in the long run, as cash from the "secondary" offering can be used to scoop up smaller, profitable retailers which will contribute to the parent's bottom line. But in the meantime, your own equity in the company will be diluted.

4. How have the major asset and liability classes changed from period to period?

The SEC requires companies to present their balance sheets to investors on a comparative basis, meaning that you'll always be able to compare the current snapshot against a past period -- typically the corresponding prior quarter or year.

As balance sheets change from quarter to quarter, the differences in accounts form a narrative by themselves. Wall Street is hyperfocused on comparative earnings trends, but you can learn just as much, and sometimes more, from the trends of the resources that make the business possible.

For example, suppose you're interested in buying into a manufacturer of microchips for wireless products. The corporation's sales have been flat for a while, but you keep hearing that they'll soon be filling demand for the multitude of devices that comprise the Internet of Things. Compounding the noise, you've read reports on the web that the company could be facing market share pressure from larger rivals.

Wall Street analysts disagree on the manufacturer's near-term sales. Some analysts opine that revenues are poised to jump, while others predict that the competitors will soon hurt current growth prospects.

Comparing recent quarterly reports, you see that receivables are decreasing from period to period, while inventories are steadily rising. Keep in mind that sales are mostly flat. The balance sheet is telling you something: Revenue is already under pressure.

When receivables decrease under middling sales, you can in many cases infer that new sales aren't replenishing receivables fast enough, while the corresponding ramp-up in inventories indicates a slower moving product, and potential weakness in the sales pipeline. Often, such trends appear a quarter or two in advance of management announcing that headwinds are buffeting results.

Why these questions are important
Instances like the one described directly above are perhaps more common than it seems. Developing a habit of reading through balance sheets and asking your own open-ended questions may help in the quest to develop independent, well-reasoned opinions on investment candidates for your stock portfolio.

A final note: Just as in school, there aren't really any bad questions you can ask. Almost everything that pricks your curiosity will lead back to the P&L and also the statement of cash flows, statements that in themselves are worthy of your attention and time.