Please ensure Javascript is enabled for purposes of website accessibility
Log In Help Join The Motley Fool
Free Article Join Over 1 Million Premium Members And Get More In-Depth Stock Guidance and Research
By Matthew DiLallo - Sep 18, 2015 at 10:06AM

While no company is perfect, there are certain characteristics that lead to long-term outperformance. For a master limited partnership, five key characteristics tend to win over the long term. They are, in a sense, what would make up the perfect MLP.

I've decided to put Vanguard Natural Resources, LLC (NASDAQ: VNR) to the test to see how it stacks up against the perfect MLP. Here's how it did.

1. An MLP should have a bounty of fee-based assets
Investors are drawn to MLPs because of their high yields, however, those yields aren't worth a dime if they aren't safe. That means an MLP needs to have rather secure cash flow, which is best provided by having a bevy of fee-based assets. Ideally, the perfect MLP's cash flow would be supported by at least 75% from its cash flow being backstopped by fee-based assets under long-term contracts.

Unfortunately, upstream MLPs like Vanguard Natural Resources pretty much fail this criteria by default as they typically don't own any fee-based assets. Instead, they hedge their oil and gas production well into the future. However, even if we gave Vanguard a pass and exchanged hedged cash flow with fee-based cash flow, it would still fail. That's because as we see in the chart below, its hedges really dry up after this year. 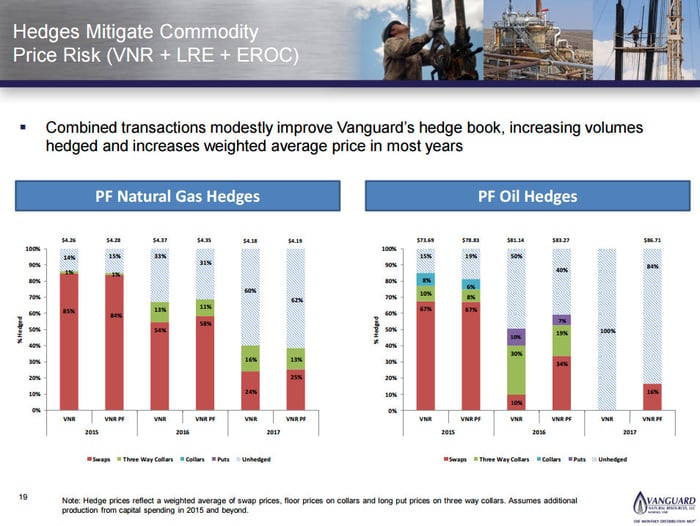 2. An MLP should have a solid balance sheet
A perfect MLP would have either an investment grade credit rating or a debt-to-EBITDA ratio of 4.0 times or less. This is an area that Vanguard Natural Resources will pass once it completes its acquisition of Eagle Rock Energy Partners (NASDAQ: EROC) and another smaller upstream MLP later this year. As we see on the following chart, its pro forma debt-to-EBITDA ratio will be just 3.6 times once both deals are complete, due largely to the addition of Eagle Rock Energy Partners and its low leverage ratio. 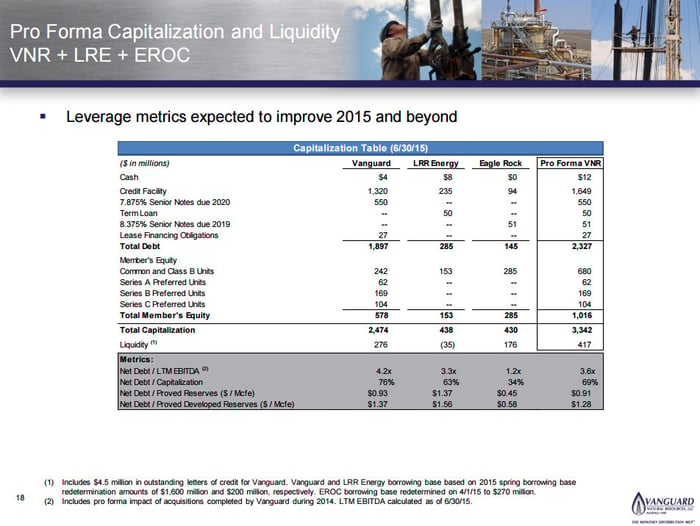 Having said that, it is important to note that this is a backward looking ratio. That really matters because Vanguard Natural Resources' EBITDA in the future will likely fall as its oil and gas hedges fall off leaving it more exposed to weak commodity prices. Said another way, what appears to be a solid balance sheet now, won't be quite as strong if prices remain weak. Further, the company currently has $1.32 billion borrowed on its revolving credit facility, leaving it very close to its $1.6 borrowing base. If that base is cut, Vanguard could have to scramble for cash to repay any overage.

4. An MLP should have a history of distribution growth
Speaking of distribution cuts, Vanguard Natural Resources has already cut its payout once this year. That broke a long string of years where the company had increased its distribution. This is a pretty clear fail.

5. An MLP should have a visible project backlog
The perfect MLP would have a long history of growing its payout with clear visibility for near-term growth. That growth typically would come from projects coming online that would boost its cash flow. Unfortunately, that clarity is clearly lacking at Vanguard as its growth is primarily acquisition driven as we see on the following slide. 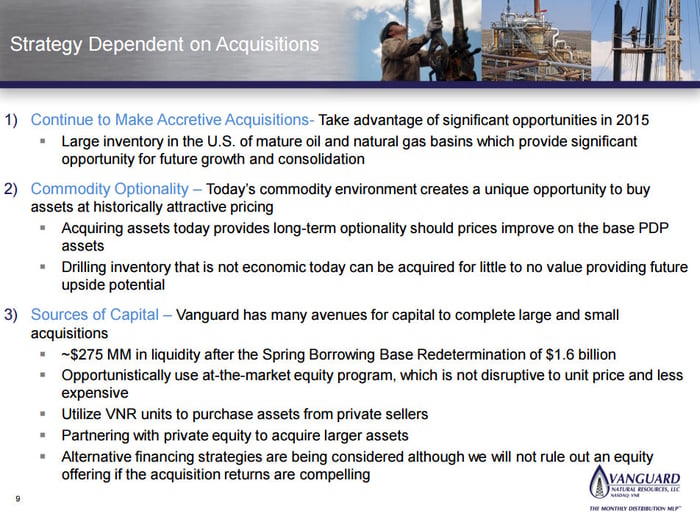 Vanguard has a strong history of making acquisitions having completed $4.2 billion in deals since going public in 2008. Further, it is in the process of acquiring Eagle Rock Energy Partners and another MLP. However, acquisitions are tough to predict, meaning it has little visibility into future growth.

Investor takeaway
Clearly, Vanguard Natural Resources is not the perfect MLP as it fails most of the key tests. That doesn't mean it won't outperform, as its mergers with Eagle Rock Energy Partners and another MLP will really strengthen its balance sheet and provide it with a much stronger platform. However, its exposure to commodity prices and reliance on acquisitions just adds a lot of risk so investors need to be careful not to over allocate when investing in Vanguard as it could be a bumpy ride over the long-term.