Though Microsoft investors are hoping the forthcoming Surface Pro 4 can withstand Apple's iPad Pro, they might be better served by focusing on possible red flags in the enterprise tablet market as a whole.

Between the recent debut of its iPad Pro and its enterprise software pact with Cisco Systems (NASDAQ: CSCO), tech giant Apple (AAPL 1.37%) clearly has its sights set on Microsoft's (MSFT 0.07%) enterprise tablet business.

As you might know by now, Microsoft recently announced it will hold its own pre-holiday product launch extravaganza on October 6. The launch invitation cites "Windows 10 devices" and will almost assuredly feature an update to Microsoft's Surface Pro. So, what should investors anticipate from Microsoft's next-generation answer to Apple's iPad Pro? Let's take a look.

What to watch at Microsoft's upcoming event
In keeping with Apple's choice to refresh its entire product portfolio in a single event, Microsoft will use October's keynote to introduce an updated Surface Pro 4 tablet, two new Lumia smartphones, and an improved Band wearable.

In terms of meaningful improvements, it's widely anticipated that the updated Lumia 950 and Lumia 950 XL will receive a far more drastic specifications overhaul than the Surface Pro 4. In looking at recent rumors regarding the Surface Pro 4, the primary story might in fact be that Microsoft's forthcoming tablet lacks any significant innovations over its predecessor. That isn't to say Microsoft won't proceed with the usual hardware updates (processor, display, etc.) that certainly incrementally enhance one year's smartphone or tablet over the previous year's, though.

It's worth noting, here, that avoiding any significant changes to the Surface lineup is likely by design, too. An unfortunate reality of producing an enterprise-grade tablet is that Microsoft also remains somewhat beholden to corporate IT departments that have invested to support the device. As such, Microsoft has apparently pledged to maintain the overall form factor and charger design for the Surface Pro 4. Importantly, Microsoft could, and I'd argue would do well to, make the Surface thinner and/or larger as long as it still works with pre-existing support components like docking stations. However, for investors hoping to see Microsoft pursue some kind of bold step to distance its tablets from Apple's new iPad Pro, all signs point to more of the same.

Despite consistently improving the Surface since its 2012 debut, Microsoft's tablet business has consistently failed to grow beyond niche devices. Microsoft declines to provide unit shipment data in its quarterly reports, but looking at Surface revenue over Microsoft's past two fiscal years helps reiterate this trend. 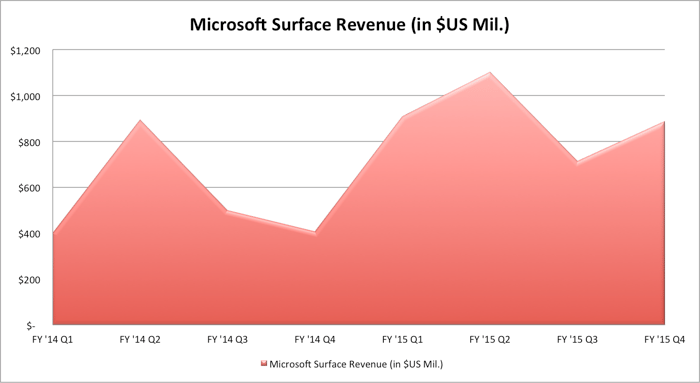 Microsoft's Surfaces range from $499 to $1,399, so trying to parse unit shipments or average selling price (ASP) is -- unfortunately -- fruitless. However, assuming a plausible and convenient ASP of $888 implies Microsoft shipped around 1 million Surfaces in quarter ended in June. Per IDC CY 2015 Q2 tablet data, Microsoft couldn't have sold more than 1.6 million tablets. Putting that in context, the global tablet market shipped 44.7 million total tablets last quarter. Viewed through this lens, Microsoft's enterprise-oriented tablet doesn't appear to have found its way into many companies worldwide.

This implies one of two things, each of which matter to Microsoft's and Apple's long-term enterprise tablet efforts. The first possibility is that Microsoft's Surfaces simply fail to resonate with corporate IT departments, who might still prefer laptops for their workers to so-called "laptop replacements," as Microsoft has tried to bill the Surface Pro 3. If that proves true, Apple likely enjoys a sizable opportunity with the iPad Pro. However, with the overriding popularity of Windows in workplaces around the world, I remain skeptical that that's a justifiable conclusion.

Instead, I worry that the market for enterprise tablets as a whole appeals to a rather limited subset of overall business users. To me, the data support this conclusion far more than anything else, and it also makes sense. Barring the need for a touchscreen or a stylus, why would a corporate user want to replace a laptop with a similar device when the form factor of many of today's best Windows and OSX laptops are essentially as thin as today's tablets?

So, while Apple's iPad Pro and Microsoft's coming Surface Pro 4 will certainly refocus investors' attention on larger, business-focused tablets, I also maintain that investors in either company need to temper their expectations for the ultimate benefit these products will provide to either company's bottom line.