An analyst thinks shares of the graphics chip company could continue to soar. Does a $30 price target make any sense?

NVIDIA (NVDA 5.16%), the leading graphics chip company, has been largely unscathed by the recent slump in PC sales. The company has been winning market share during the past year, and sales of its high-end gaming GPUs have driven both revenue and profits higher. The stock has been on an upward trend since the beginning of 2013, with investors realizing a gain of roughly 85% since that time. 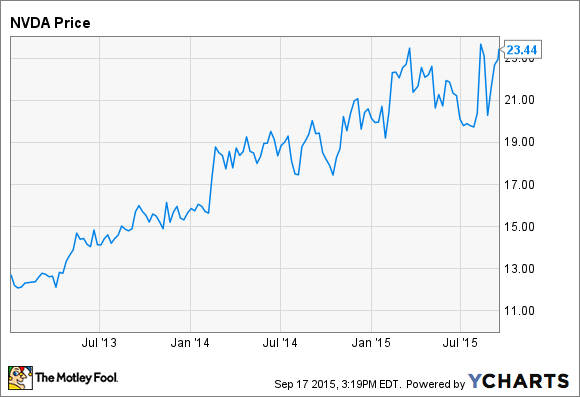 Analysts from Jefferies believe that shares of NVIDIA can go much higher. On September 17, the firm upgraded NVIDIA to buy, giving the stock a $30 price target, and citing growth prospects in the virtual reality market as a potential catalyst. Is NVIDIA really worth $30 per share? Let's dig in and find out.

A look at the present
NVIDIA has two main businesses. The first is designing GPUs for use in PCs and servers, and this business represents the majority of the company's revenue, about 83% during the latest quarter. The GPU business contains GeForce GPUs used for PC gaming, Quadro GPUs used in workstations, Tesla GPUs used in high-performance computing and supercomputing applications, and GRID GPUs used for graphics virtualization.

NVIDIA's second business is Tegra, its mobile system-on-a-chip. Tegra is struggling, with revenue declining and the segment producing losses, but rapid growth in sales to automotive companies should lead to growth in the segment within the next couple of years. At the moment, though, Tegra is reducing NVIDIA's profitability.

After adjusting for the write-off of its modem business, NVIDIA produced earnings per share of roughly $1.06 during the past 12 months. The company has a cash-rich balance sheet, with net cash equivalent to about $5.60 per share. At the current stock price of around $23.50, NVIDIA's cash-adjusted price-to-earnings ratio sits at 16.9 times. Using Jefferies' earnings estimate for fiscal 2017 of $1.36 per share, the cash-adjusted forward P/E ratio is a lower 13.2.

A fair value of $30 per share may look like a stretch based on NVIDIA's current earnings, and even based on Jefferies' estimates, NVIDIA would trade at a cash-adjusted forward P/E ratio of 18 times, a lofty valuation to say the least. But NVIDIA has multiple growth opportunities in front of it, and substantial earnings growth in the coming years is a real possibility.

Cars and VR
Beyond continued growth in PC gaming, NVIDIA has two potentially major opportunities: automobiles and virtual reality. NVIDIA's automotive division, which is comprised of its Tegra chips powering in-car displays, is already a $200 million annual business, but it could become much bigger in the coming years. NVIDIA is pushing Tegra to be the brains behind the self-driving car, launching its Drive PX platform earlier this year, a deep learning computer vision system that can identify objects, including other cars, pedestrians, and road signs, in real time.

If NVIDIA can get out ahead of competitors and make Tegra the standard for driver assistance functions and eventually fully autonomous vehicles, it could easily become a billion dollar business, and those losses could transform into huge profits for the company.

The second opportunity is virtual reality. Perhaps the best known VR company, Oculus VR, is set to launch its Oculus Rift headset early next year. The Rift will require a powerful PC to function, and that's great news for NVIDIA's gaming GPU business. Unlike PC games, where the frame rate can be allowed to fluctuate, VR headsets require a rock-solid frame rate in order to avoid discomfort for the user. If VR takes off, demand for high-end GPUs could get a nice boost. In the long run, if VR becomes a mainstream technology, it could expand the market for GPUs considerably.

Jefferies' $30 per share price target for NVIDIA bakes in a decent amount of optimism regarding the company's growth, but as these opportunities play out for the company during the next few years, it's not hard to imagine earnings expanding considerably. One wildcard is the end of a licensing agreement with Intel, which could knock a big chunk off of NVIDIA's earnings starting in 2017 if it's not renewed. But in the long run, this is a mere bump in the road.

While it's difficult to justify a $30 fair value today for shares of NVIDIA, if the best-case scenario plays out for the company, the stock could be worth far more in the coming years.