Please ensure Javascript is enabled for purposes of website accessibility
Log In Help Join The Motley Fool
Free Article Join Over 1 Million Premium Members And Get More In-Depth Stock Guidance and Research
By Bradley Seth McNew - Sep 19, 2015 at 9:31AM

Phil Knight led Nike to becoming the behemoth it has been over the last few decades, but here's how CEO Mark Parker is setting Nike up for even more growth the next few decades.

Nike (NYSE: NKE) is by far the dominating brand in sports footwear and apparel around the world, led to this position by its founder Phil Knight. However, it's been nearly a decade since Knight stepped down as CEO and Mark Parker took over. Here's why the last few years have been some of Nike's best, and why Parker is positioning the company to go even higher from here.

Mark Parker's long history with Nike
Parker joined Nike back in 1979, before it went public, and over the last 35 years has played key roles on various innovation-focused teams. During that time, he had roles all the way from designer up to VP of Consumer Product Marketing, VP of Global Footwear, and eventually CEO.

Since taking over as CEO in 2006, Parker has done an excellent job taking Nike from the successes of the last few decades and expanding on the Nike brand with increased focus on diversification, renewed international growth, increased pricing power, and continued innovation.

Nike has nearly doubled earnings since 2010, under Parker, earning a record $30 billion in sales in fiscal 2015 and holding more than 50% athletic apparel market share in the United States. Income has continued to soar: 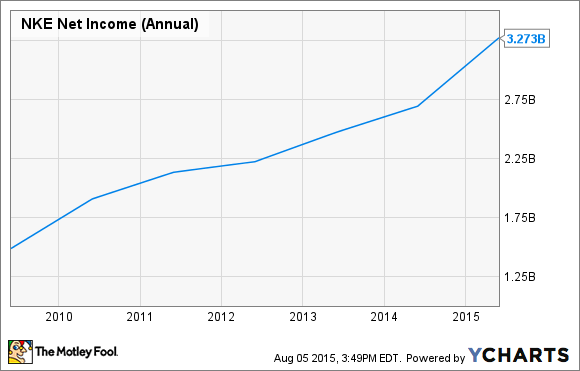 Increased footwear dominance: Parker's background is in footwear design and he eventually became VP of Global Footwear, so it makes sense that once he became CEO, footwear would be one of the best performing segments. Even though Nike has long dominated the athletic footwear market, with an estimated 95% of the U.S. basketball shoe market, footwear sales have expanded even further under Parker. Shoe sales were up 13% in fiscal 2015.

One of the ways this has been accomplished is by diversifying outside of just Nike Brand shoes. Nike bought Converse back in 2003 (before Parker was CEO but under his guidance as VP of Global Footwear) and the brand has been cultivated in recent years. Early this year Nike added their Lunarlon soles to the classic Chuck Taylors, improving wearability and quality. Sales of Converse brand shoes continues to increase, up 18% in FY 2015 over the year prior adding nearly $2 billion to Nike's $18 billion in 2015 footwear revenue. Even though Nike is dominating its core segments like basketball shoes, growth in other footwear brands/sports will help this segment continue to thrive.

Continued worldwide growth: While Nike's sales in the U.S. have been growing at impressive rates, the company's recent revenues and future orders in other areas of the world are even more impressive. This is not only in China, though China's 18% increase in 2015 over 2014 was the fastest growing segment.

Nike is also growing in areas like Western Europe where it continues to expand its presence through creative partnerships such as the Quai 54 World Streetball Championship in Paris, France including bringing basketball legend Michael Jordan for a guest appearance. While many brands are focused only on growing in mass market areas like China, Nike is growing truly worldwide.

Did you miss your chance to invest in Nike?
Nike's strengths have not gone unnoticed,  and in the last two years shares of Nike stock have climbed more than 60%. Is it too late to buy? Even though the stock has had a good run recently, consider that expected earnings growth still puts the projected 2017 FY year end price to earnings multiple at just 23 times (compared with the current 30 times earnings). In the long haul, earnings looks poised to continue growing.

Michael Jordan in Paris, France at the Palais 23 celebrating the 30th anniversary of the Nike Jordan Brand. Photo: Nike

The company and its directors have noticed Mark Parker's successes as well, and in July Parker was awarded a deal worth $30 million in stock compensation to stay for the next 5 years. This is good news for investors that are looking to get in on Nike now for the chance of future earnings as Parker continues to lead this well-performing company forward.