IBM shares have been falling, and Berkshire Hathaway has continued to buy. Should investors follow Buffett's lead?

IBM (IBM 1.74%) is one of the greatest American companies in history. It's over 100 years old and has reinvented itself numerous times along the way. Over the past few years, it has seen revenues decline as it shifts its business model once again to remain relevant in a changing world. The stock price has fallen over 20% in the past year. But there is reason for optimism.

Warren Buffett is perhaps the world's greatest investor and has made a fortune for himself, his partners, and the shareholders of Berkshire Hathaway over the past six decades. He's had a number of investing blunders along the way -- both sins of commission, where he later sold out of positions, and sins of omission, where he openly laments missing out on wonderful opportunities, which have acted as a drag on his total returns. Even with these errors, though. his investing record is unmatched. The record is even more impressive when we look at his highest-conviction picks.

Wells Fargo, Coca-Cola, and American Express have been mainstays in the Berkshire Hathaway portfolio for decades, and the returns from these equity positions, both in stock appreciation and dividends paid, have been extraordinary. Their combined value in the portfolio is over $50 billion, and Buffett has said in the past that these are "forever" stocks that he can't envision ever selling.

A few years back, Buffett broke from his longtime aversion to investing in technology companies to open a large position in IBM. Since that time, the stock price has fallen significantly. Rather than panic, he has repeatedly said how happy this situation makes him while continuing to add to his position. Berkshire now owns over 8% of the tech giant, and has continued to buy.

Why so happy?
Whether you want a stock price to go down or up in the near term should depend entirely on whether you plan to be a net buyer or net seller in the future. Someone who's 20 years old, has $1,000 invested in a growth company he or she loves, and plans to deposit $1,000 every year for the next five should hope for that stock price to fall or remain stagnant while they continue to accumulate shares. If an investor believes in the fundamentals of the underlying business, as Buffett clearly does with IBM, a falling stock price presents an opportunity to set oneself up for larger gains in the future.

While we all like to see our stocks increase in value, sometimes a short-term drop while we build our positions can be a very good thing. One who is fully invested and older, getting ready to sell stocks to fund retirement, for instance, doesn't necessarily have time to wait for the rebound and should hope for that share price to increase immediately.

One wrinkle is regarding share buybacks. Any time a company buys back its own stock and you don't sell yours, you are effectively owning a larger portion of the company. Even if you aren't deploying new capital yourself, if a company is executing a large buyback plan, you want the share price to be lower so it can buy more shares with less money. This has been IBM's bread and butter since 2005, as its shares outstanding have fallen from over 1.6 billion to under 1 billion.

Management continues to aggressively buy back shares, and existing shareholders own larger and larger pieces of the company as a result. 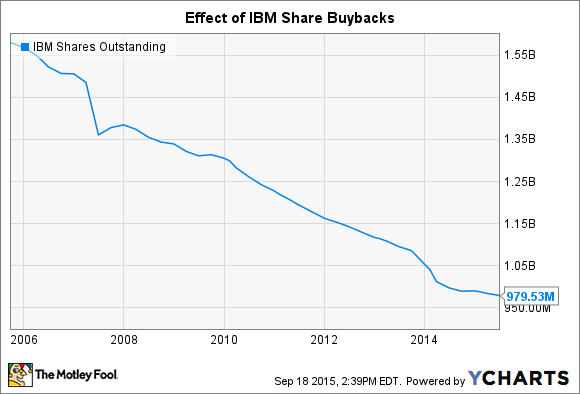 Repurchasing shares when they're undervalued, issuing shares when they're pricey to fund acquisitions, and deciding how to structure the company are extremely important capital-allocation decisions that have real effects on shareholders' pocketbooks. Ideally, we'd like to see wonderful capital-allocation decisions along with growing revenues and net income. On this front, the future looks bright for IBM.

IBM is undergoing a massive business shift into cloud, services, and analytics that allow it to leverage its enterprise relationships. These changes have already improved gross margins to over 50% from 46.1% in 2010. I expect margin strength to continue to improve. Revenues have dropped during this period from a high-water mark of nearly $107 billion in 2011 to under $89 billion on a trailing-12-month basis. It's hard for many to see the long-term plan, and the declining revenue numbers make IBM look like it's beginning to fail. But I think they reflect a bold decision by CEO Ginni Rometty to make short-term sacrifices to ensure long-term success. The Oracle of Omaha has shown that he agrees, both with his words and his actions.

Valuation, buybacks, and dividend
While following Buffett into every investment disclosed on Berkshire's 13F filings may or may not prove fruitful, there are compelling reasons to follow into this high-conviction pick.

The forward P/E for IBM is under 10, based on 2016 estimated earnings. That number, for a company with a powerful brand, the Buffett stamp of approval, and a shareholder-friendly management team, makes it seem like a steal when compared with the 17.6 forward P/E of the S&P 500.

Buybacks should continue as long as the stock remains cheap. The buybacks will further boost future shareholder returns in the most tax-efficient way. Buy now, and over time you will own more and more of IBM without every having to deploy another cent of your own capital.

The dividend yield is over 3.5%, which is well above that of the market as a whole. It's also safe and looks poised to grow. With a payout ratio just over 30%, there is no risk of a cut for the foreseeable future, and yearly hikes should continue.

Foolish thoughts
Buffett's available investing universe is limited to very large companies. He almost certainly wouldn't be investing the same percentage of his funds into IBM if he had tens of thousands of dollars instead of tens of billions of dollars to deploy. This is not an investment that will return 10 times in value over the next decade.

With a revamped business plan, an aggressive share-buyback policy, and a nice dividend that's poised to grow even higher, IBM should provide above-average returns for decades to come. As investors, slow and steady over time can sometimes be the best way to invest. When you have the greatest investor around on your side, it makes it all the easier to stay the course.