Odds are you didn't feel the shock waves. But many others did.

Thinking that it was a done deal, most in the industry were amazed to find that the merger between Exelon Corporation (NYSE: EXC) and Pepco Holdings (NYSE: POM) didn't receive final approval last month. Though federal government agencies and several states approved the $6.8 billion deal, Washington D.C.'s Public Service Commission, or PSC, unanimously rejected it.

On the other side of the table is Pepco Holdings, which serves about 2 million customers in the mid-Atlantic states. The company reported $4.9 billion in operating revenue for the year.

What's the deal with the deal?
Attempting to meet the requests of residents who "mandated that the District must pursue a cleaner and greener future that includes more renewable energy resources and more distributed generation," the commission rejected the deal. It further specified its concerns in finding that the deal fails to help as "the District moves forward to embrace a cleaner and greener environment and pursues its goals of having 50% renewable energy sources by 2032."

Exelon maintains that it has been an advocate of renewable energy and continues to invest in its development. In reality, Exelon's commitment to renewable energy is minimal. Of the more than 35,000 MW of total capacity that the company had at the end of 2013, wind accounted for 3.7%, and solar represented 1%. But the lackluster portfolio isn't the only sign that the company is more dedicated to nuclear power and fossil fuels than renewables.

Exelon has repeatedly lobbied against the renewal of the Production Tax Credit, which many credit as driving the growth of the wind industry. Evidently, being so outspoken against the tax credits affected the PSC's decision. In its order, the commission found that, "parties in the proceeding and community commenters have questioned whether the Joint Applicants will be an enthusiastic partner to carry out policies and operations for a local distribution system with a greater amount of distributed generation."

Pepco's track record with encouraging renewable energy growth isn't much more impressive. A recent report from EQ Research found that Pepco Maryland had the longest interconnection time -- the amount of time between a PV system being installed and permitted to operate -- in the country; on average, it took 76 days. At 51 days, Pepco Washington D.C. had the second-longest average time.

Looking at these utilities side by side, it's fair to say that the concerns of the PSC are well-founded.

What now?
For several years, Exelon has successfully grown its revenue. However, its aging fleet of nuclear power plants has compromised the company's ability to grow profits. 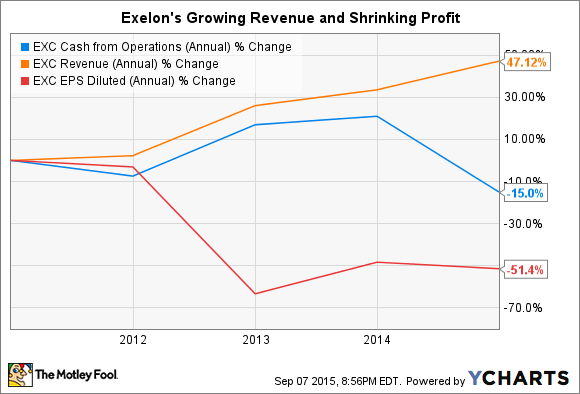 Although revenue has grown more than 47% during the past five years, operating cash flow has declined by 15% and diluted EPS has dropped by more than 51%. Clearly, the expenses associated with decommissioning its aging nuclear fleet is weighing the company down. During 2014, the estimated cost for retiring its nuclear facilities increased nearly 43% from $4.9 billion to $7.0 billion, and as more facilities face retirement, these costs should continue to rise.

In addition to rising decommissiong expenses, volatility in the energy market is also a threat to the company. According to the company's initial press release, the deal with Pepco would "further expand Exelon's regulated holdings, ensuring a balanced earnings mix as power prices recover." With the deal in serious jeopardy, Exelon will need to adopt comparable measures to "ensure a balanced earnings mix." If the company is unable to accomplish this in the near-future, I suspect that shares will continue their downward slide as the stock has already taken a hit after announcement of the rejection by the PSC. 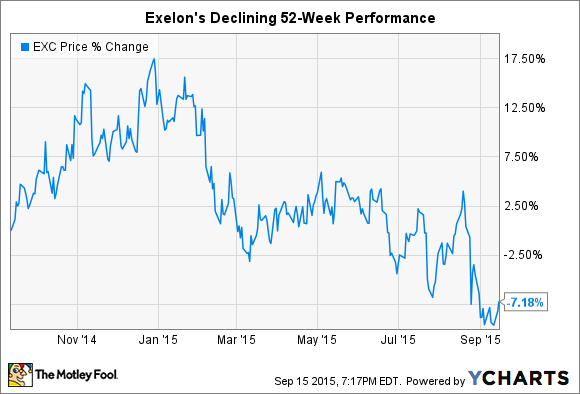 Should Exelon continue in failing to compensate for the ruined deal, I suspect that the company's ability to sustain its dividend may come into question.

The takeaway
The market didn't react well to the announcement of the rejected deal, and it doesn't look like there's anything hopeful on the horizon for Exelon or its investors. The volatility in the energy markets has created some interesting opportunities for investors, but, here's a case where it's better to sit back and watch from the sidelines.