Taco Bell is about to debut its latest "Chipotle-killer" concept, but it's no threat at all to the fast-casual leader.

Fast-food giant Yum! Brands (YUM 1.77%) had recently rolled out a new set of higher-end entrees at its Taco Bell chain, called the "Cantina Bell" menu. Einhorn argued that this new menu -- which offered higher-quality food than typical Taco Bell fare but still undercut Chipotle on price -- would slow Chipotle's growth and lead to a big drop in its pricey stock.

It was a terrible call. True, the stock briefly dropped as much as 25% following Einhorn's public call to short Chipotle. Chipotle's growth even slowed briefly in late 2012 and early 2013. But by the end of 2013, growth was accelerating rapidly. Chipotle shares have risen 130% since the beginning of October 2012, while EPS has nearly doubled in that three-year span. 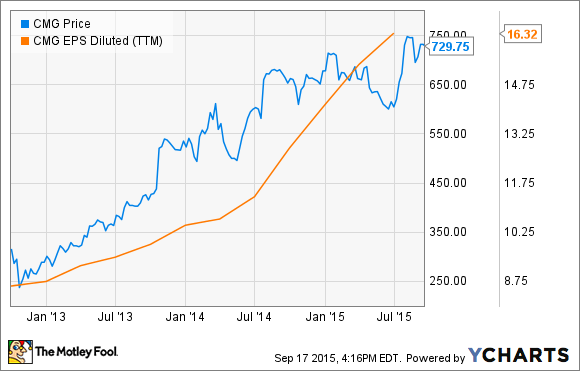 Now Yum! Brands is at it again with another attempt to move Taco Bell upmarket. However, while creating a better experience could bolster Taco Bell's results, any gains the chain makes probably won't be at Chipotle's expense. (But see my Foolish colleague Rick Munarriz's take on the announcement for a contrasting opinion.)

Taco Bell's next frontier
Next week, Yum! Brands will open its first "Cantina Taco Bell" restaurant in Chicago, with a second location in San Francisco opening later in September. These new locations will move even further in the direction of Chipotle.

First, the new Cantina Taco Bell restaurants are targeted for dense urban areas and won't have drive-through windows (a staple of a typical Taco Bell). Second, the food will be cooked in open kitchens and served in open-face baskets. Third, the restaurants will serve alcohol -- unlike existing Taco Bell restaurants, but in line with most Chipotle locations.

Cantina Taco Bell restaurants won't have a completely new menu, though. They will feature a special set of tapas-style shareable appetizers, but aside from that they'll have the standard Taco Bell menu.

This isn't a threat to Chipotle
Opening these new Cantina Taco Bell locations is a relatively low-risk move for Yum! Brands. The cost of testing a few concept restaurants is minuscule for a $13 billion company. In addition, by offering its standard menu plus a few unique options, Taco Bell won't alienate its existing fan base. If successful, the Cantina Taco Bell concept could help Taco Bell continue its growth by making urban locations with no drive-through more viable.

However, none of the changes Taco Bell is introducing with this new concept are likely to shake the loyalty of Chipotle enthusiasts. After all, the main reason customers are so loyal to Chipotle is that they perceive its food quality as being significantly higher than other fast-food and fast-casual eateries.

Chipotle customers are very loyal to the chain. Photo: The Motley Fool.

Since the Cantina Taco Bell locations will mostly be serving the standard Taco Bell menu, these locations aren't likely to do any better than a typical Taco Bell at appealing to Chipotle fans.

Furthermore, Chipotle has the second best customer-satisfaction rating in the fast-food industry, according to the most recent American Customer Satisfaction Index survey. This means that unless Chipotle screws up, its customers probably won't even consider other options. (And certainly not Taco Bell, which was third-to-last in that same ACSI survey!)

Cantina Taco Bell also isn't likely to impede Chipotle's efforts to attract new customers. In fact, by copying many aspects of Chipotle's model, the concept could help Chipotle by validating its superiority to the standard Taco Bell in the eyes of consumers. This could expand interest in fast casual Mexican food, lifting all boats in that market segment.

So far, Chipotle shareholders haven't panicked about Taco Bell's latest plan. Perhaps investors have finally realized that Chipotle is so entrenched that even a fast-food giant like Yum! Brands can't disrupt its growth.