Please ensure Javascript is enabled for purposes of website accessibility
Log In Help Join The Motley Fool
Free Article Join Over 1 Million Premium Members And Get More In-Depth Stock Guidance and Research
By Matthew DiLallo - Sep 21, 2015 at 11:11AM

These energy exchange-traded funds are too risky.

Energy prices have been decimated over the past year as both the oil and the gas markets are oversupplied. However, there are some signs on the horizon that balance could return to those markets over the next year as supply slows and demand grows. That could push oil and gas prices higher.

That's a tempting scenario for investors as a lot of profits could be earned if prices improve. One way to play such a thesis is to simply invest in an ETF and gain broad exposure to that trend. However, there are three Energy ETFs that should be avoided at all costs as they'll lead to much bigger losses if that trend doesn't play out as quickly as expected.

1. A long-term loser
The United States Oil ETF (USO 0.04%) is intended to track the performance of U.S. oil benchmark West Texas Intermediate, or WTI. Over the short term, it does just that as its moves are roughly correlated with the price of oil -- it is designed to track the daily movements of WTI. However, over the long term, it does a horrible job at matching the oil price as we can see on the following chart. 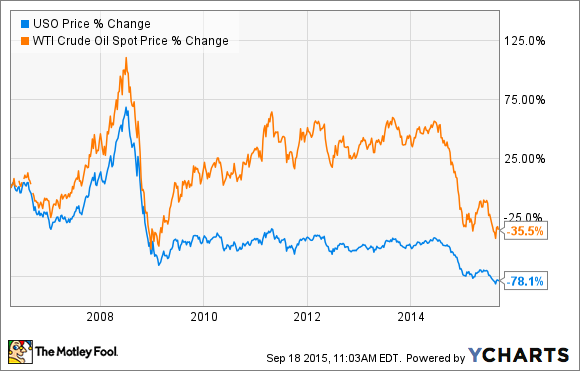 The reason it does a poor job of tracking oil over the long term is because it invests primarily in crude oil futures contracts. Because of this, it must roll into new contracts as the old ones near expiration, which leads to frictional trading costs as well as losses when the oil market is in contango. What happens is that oil futures contracts in contango are more expensive in future months meaning the USO needs to pay more to roll its contracts forward. Over time these take a big bite out of its value.

2. Slowly fading away
We see the same problems with the Natural Gas ETF (UNG 0.17%). Like its oil peer, it is intended to track the price of the U.S. natural gas benchmark at Henry Hub. However, it has done a really poor job over the long term of tracking the price of gas. 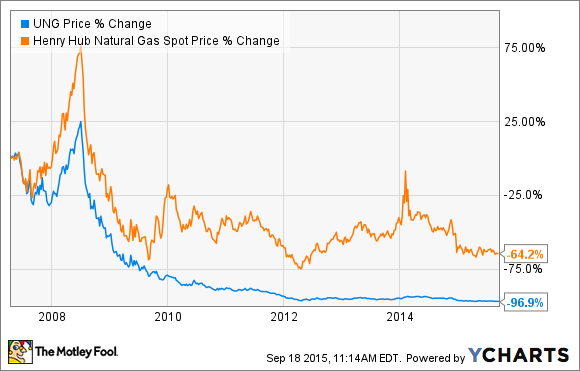 Its downfall are those same futures contracts in contango as rolling eats away at the fund's value over the long term. What is means is that an investor could be right that the price of natural gas is going higher, but wrong on the timing and completely miss out on the rebound as this energy ETF's value is eaten away by rolling costs.

3. Leverage cuts both ways
The final energy ETF to avoid is the Energy Bull 3X -- Triple-Leveraged ETF (ERX 0.78%) or any other double or triple leveraged energy ETF for that matter. This energy ETF in particular seeks daily investment results of 300% of the performance of the Russell 1000 Energy Index, before fees and expenses. In other words this fund is fueled with a whole lot of leverage to really juice returns. While that sounds great if energy stocks really do rebound, that leverage could be catastrophic should oil prices remain lower for longer.

One of the reasons energy stocks have been battered so badly over the past year is because many employed a lot of leverage to fund their growth. That means that there's already a leveraged return potential in the industry, leaving no need to invest in a leveraged ETF, especially one that's 3X-leveraged. Further, if the rebound doesn't materialize as quickly as hoped, this energy ETF will really multiply its losses.

Investor takeaway
It would be awful to be right that energy prices are going up but use the wrong vehicle to profit from such a rebound because the timing was off. These three energy ETFs need both the thesis and the timing to be perfect or else investors will get underwhelming results and could even lose money if oil and gas stay lower for longer than expected. That's why these should be avoided at all costs. There are better ways to invest in a rebound in the energy sector.